Don’t Let Your Pastor Politicize You 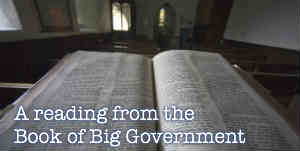 If you are one of the faithful still going to church on Sunday, don’t be the fertile ground that lets your pastor politicize you.Even if it’s only for the sake of situational awareness,  take stake of what is happening in many of the mainline churches, whose   pastors have become the latest breed of political activists, trading the Gospel of Christ for politics, all for the 30 pieces of silver called government grants.

Political activists at the pulpit, derelict in duty,  have conveniently forgotten that it is the souls and not the politics of the faithful that need saving.

Notice how many churches now mimic Big Brother Government when it comes to dictating to you what is true charity?

The government and its increasingly politically active churches have decided on your behalf that amnesty is the charity of our day.

Big Brother Government never chooses charity based on altruism but on hardline politics, the kind that guarantees them their survival.

The same government/church charity Selection Committee turn a deaf ear to persecuted Christians , to war veterans and to the poor who struggle more than ever in every parish and congregation in the worst economic downturn since the Great Depression.

“Thank God, Seattle University Students for Life and The Cardinal Newman Society spoke out against the scandal.  As a result Seattle University president, Fr. Stephen Sundborg, S.J. responded with orders to remove the pro-abortion flyers.

“Shockingly, however, the pro-abortion event was not canceled, just postponed. In a message to the Newman Society on Feb. 25, Fr. Sundborg says:

“The event will not be taking place this evening [Feb. 25] and the students involved in the planning will be looking to include additional viewpoints and perspectives before seeking to reschedule it.”

Wait a second.  The right to life is not up for grabs. Nor does the pro-life truth need to give “equal” air time to Planned Parenthood and its pack of lies—especially on a campus that purports to be Catholic.”Never let a pastor politicize you even if he’s the pope.“In a February 8 interview with one of Italy’s most prominent dailies, Corriere Della Serra, Pope Francis praised Italy’s leading proponent of abortion – Emma Bonino—as one of the nation’s “forgotten greats,” comparing her to great historical figures such as Konrad Adenauer and Robert Schuman.  (LifeSiteNews, Feb. 26, 2016).“Knowing that his praise of her may be controversial, the Pope said that she offered the best advice to Italy on learning about Africa, and admitted she thinks differently from us. “True, but never mind,” he said. “We have to look at people, at what they do.”

“At 27, Bonino had an illegal abortion and then worked with the Information Centre on Sterilization and Abortion which boasted over 10,000 abortions. There are famous photos of Bonino performing illegal abortions using a homemade device operated by a bicycle pump.  Arrested for the then-illegal activity she spent a few days in jail and was acquitted and entered politics.

“When she was appointed Italy’s foreign minister in 2013 there was a general outcry from life and family leaders at the appalling situation.

“Responding to the Pope’s praise of Bonino, pro-life leaders in Italy expressed disbelief.  “How can the pope praise a woman that is best known in Italy for practicing illegal abortion and promoting abortion?” commented Msgr. Ignacio Barreiro, who was until last year the head of the Rome office of Human Life International.

“Luca Volonte, an Italian politician and the president of the pro-life Novae Terrae Foundation, told LifeSiteNews he believed the Pope “was not really informed about how much Mrs. Bonino has done in Italy and at the international level to promote abortion and euthanasia.”  Even though he admits “she did well in Egypt,” he adds that even there “she promoted her anti-life values.”  The Pope, said Volonte, “was wrong and worse were the members of His secretariat for not informing him.”

“The Pope’s possible ignorance of Bonino’s stance is unlikely given his justifications in the interview.  She has been for decades the most prominent supporter of abortion in Italy.  Moreover, the Pope already received criticism for his contact with Bonino in 2015 when he called her about her cancer and invited her to the Vatican.”

NEVER  let political pastors be the cause of YOU losing YOUR faith.  Better they should lose theirs than yours.

Do not retreat into despair and give up on your faith.  Go over their heads, by going directly to Jesus, the greatest pastor of them all.

God protect us all from the wickedness and snares of the devil and the doers of evil, especially those who come dressed in robes.