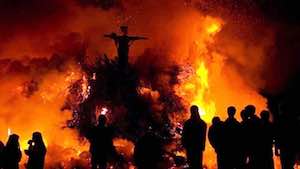 Open Doors, an organization that advocates for persecuted Christians, recently released its latest World Watch List—a report that highlights and ranks the 50 worst nations to be Christian.  It found that 2015 was the “worst year in modern history for Christian persecution.” Who claims the lion’s share of this unprecedented persecution?  Muslims—of all races, nationalities, languages, and socio-political circumstances: Muslims from among America’s closest allies (Saudi Arabia #14 worst persecutor) and its opponents (Iran #9); Muslims from economically rich nations (Qatar #21) and from poor nations (Somalia #7 and Yemen #11); Muslims from “Islamic republic” nations (Afghanistan #4) and from “moderate” nations (Malaysia #30 and Indonesia #43); Muslims from nations rescued by America (Kuwait #41) and Muslims from nations claiming “grievances” against the U.S. (fill in the blank __).

The report finds that “Islamic extremism” is the main source of persecution in 41 of the top 50 countries—that is, 82 percent of the world’s persecution of Christians is being committed by Muslims.  As for the top ten worst countries persecuting Christians, nine of them are Muslim-majority—that is, 90 percent of nations where Christians experience “extreme persecution” are Muslim.

Still, considering that the 2016 World Watch List ranks North Korea—non-Islamic, communist—as the number one worst persecutor of Christians, why belabor the religious identity of Muslims?  Surely this suggests that Christian persecution is not intrinsic to the Islamic world but is rather a product of repressive regimes and other socio-economic factors—as the North Korean example suggests and as many politicians and other talking heads maintain?

Here we come to some critically important but rarely acknowledged distinctions.  While Christians are indeed suffering extreme persecution in North Korea, these fall into the realm of the temporal and aberrant.  Something as simple as overthrowing Kim Jong-un’s regime could lead to a quick halt to the persecution—just as the fall of Communist Soviet Union saw the end of religious persecution. The vibrancy of Christianity in South Korea is suggestive of what may be in store—and thus creates such fear for—its northern counterpart.

In the Islamic world, however, a similar scenario would not alleviate the sufferings of Christians by an iota.  Quite the opposite; where dictators fall (often thanks to U.S. intervention)—Saddam in Iraq, Qaddafi in Libya, and ongoing attempts against Assad in Syria—Christian persecution dramatically rises.  Today Iraq is the second worst nation in the world in which to be Christian, Syria fifth, and Libya tenth.  A decade ago under the “evil” dictators, Iraq was ranked 32, Syria 47, and Libya 22.

The difference between Muslim and non-Muslim persecution (e.g., communist) of Christians is that the latter is often rooted in a particular regime

The difference between Muslim and non-Muslim persecution (e.g., communist) of Christians is that the latter is often rooted in a particular regime.  Conversely, Muslim persecution of Christians is perennial, existential, and far transcends this or that regime or ruler.  It is part and parcel of the history, doctrines, and socio-political makeup of Islam—hence its tenacity; hence its ubiquity.

Moreover, atheistic communism is a relatively new phenomenon—about a century old—and, over the years, its rule (if not variants of its ideology) has greatly waned, so that only a handful of nations today are communist.

On the other hand, Muslim persecution of Christians is as old as Islam. It is a well-documented, even if suppressed, history.

To further understand the differences between temporal and existential persecution, consider Russia. Under communism, its own Christians were persecuted; yet today, after the fall of the USSR, Russia is again reclaiming its Orthodox Christian heritage.

North Korea—where Kim Jong-un is worshipped as a god and the people are shielded from reality—seems to be experiencing what Russia did under the Soviet Union.  But if the once mighty USSR could not persevere, surely it’s a matter of time before tiny North Korea’s walls also come crumbling down, with the resulting religious freedom that former communist nations have experienced. (Tellingly, the only countries that were part of the USSR that still persecute Christians are Muslim, such as Uzbekistan, #15, and Turkmenistan, #19.)

Time, however, is not on the side of Christians living amid Muslims; quite the opposite.

In short, Muslim persecution of Christians exists in 41 nations today as part of a continuum—or “tradition”—that started nearly 14 centuries ago.  As I document in Crucified Again: Exposing Islam’s New War on Christians, the very same patterns of Christian persecution prevalent throughout the Muslim world today are often identical to those from centuries past.

A final consideration: North Korea, the one non-Muslim nation making the top ten worst persecutors list, is governed by what is widely seen as an unbalanced megalomaniac; conversely, the other nine nations are not dominated by any “cults-of-personalities” and are variously governed: including through parliamentarian democracies (Iraq), parliamentarian republics (Pakistan and Somalia), one-party or presidential republics (Eritrea, Sudan and Syria), Islamic republics (Afghanistan and Iran), and transitional/disputed governments (Libya).  Looking at the other Muslim nations that make the top 50 persecutors’ list and even more forms of governments proliferate, for example monarchies (Saudi Arabia #14).

The common denominator is that they are all Islamic nations.

Thus, long after North Korea’s psychotic Kim Jong-un has gone the way of the dodo, tens of millions of Christians and other “infidels” will continue to suffer extreme persecution, till what began in the seventh century reaches fruition and the entire Islamic world becomes “infidel” free.

Confronting this discomforting and better-left-unsaid fact is the first real step to alleviating the sufferings of the overwhelming majority of Christians around the world.

Unfortunately, however, while some are willing to point out that Christians are being persecuted around the Muslim world—why that is the case, why 82% of the world’s persecution is committed by Muslims from a variety of backgrounds and circumstances—is the great elephant in the room that few wish to address.  For doing so would cause some long held and cherished premises of the modern West—chief among them the twin doctrines of religious relativism and multiculturalism—to come crashing down.