Previous Next
Corey Calls Reporter “Delusional” After She Says He Assaulted Her. Ovomit State Dept. says all Patriots Delusional. 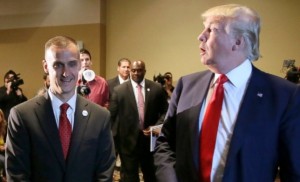 Corey Lewandowski, Donald Trump’s campaign manager, assaulted a Breitbart.com reporter, Michelle Fields according to Fields and at least one eye witness. According to Michelle Fields, “Someone had grabbed me tightly by the arm and yanked me down. I almost fell to the ground, but was able to maintain my balance. Nonetheless, I was shaken.”

The Washington Post’s Ben Terris was an eye witness. Terris saw what Lewandowski did. Thereafter, reports on the subject note that Lewandowski told another Breitbart reporter he had mistaken Michelle Fields for someone else.

Lewandowski’s explanation to Boyle, said these sources, was that he and Fields had never met before and that he didn’t recognize her as a Breitbart reporter, instead mistaking her for an adversarial member of the mainstream media.

After all of this transpired, Politico produced an actual audio recording from when the assault happened, which included the voices of Michelle Fields and Ben Terris discussing Lewandowski’s involvement.

Michelle Fields also took pictures of the bruises caused by the assault.

In a normal world all of this would lead to Lewandowski’s dismissal. Rick Tyler was dismissed from the Cruz campaign over a Facebook post. Here we have audio, eyewitnesses, and bruises.

The response of the Trump campaign is to deny it. Lewandowski, overnight, took to Twitter to call Michelle Fields a liar. Donald Trump says the Secret Service told him nothing happened.

It is beyond appalling and more evidence that neither Trump nor his ardent supporters have any sense of shame or propriety and we should not expect growth on those fronts if Trump is the Republican nominee.

This is another reason why opposition to Trump is not about issues. It is about values. The people who enter Donald Trump’s orbit are corrupted and compromised and lose their sense of right and wrong and their willingness to hold themselves to account.

We are witnessing open rebellion against a Republican Party that failed to hold itself accountable. But the people rebelling have no intention of holding themselves accountable either.

This is beyond shameful and at this point I hope lists are made of prominent Trump supporters in the media and they are all shunned and shamed in perpetuity. If they will so easily compromise their integrity for Trump, they should not be listened to or valued ever again.