This 1979 Time Magazine Article About Islam will Blow Your Mind! UNBELIEVABLE!!!

Previous Next
This 1979 Time Magazine Article About Islam will Blow Your Mind! UNBELIEVABLE!!! 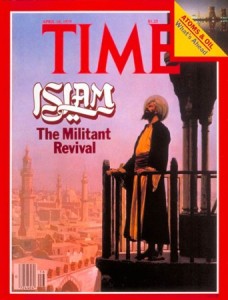 “We Muslims are one family even though we live under different governments and in various regions.” – Ayatullah Ruhollah Khomeini, leader of Iran’s revolution Thirty-seven years ago, Time magazine …

Source: This 1979 Time Magazine Article About Islam will Blow Your Mind!

“We Muslims are one family even though we live under different governments and in various regions.” – Ayatullah Ruhollah Khomeini, leader of Iran’s revolution

Thirty-seven years ago, Time magazine dedicated its cover to “Islam, The Militant Revival,” and published a lengthy article, “The World of Islam,” in which John A. Meyer wrote, “We want to examine Islam’s resurgence, not simply as another faith but as apolitical force and potent third ideology competing with Marxism and Western culture in the world today.” It was April 16, 1979.

The editor, Marguerite Johnson, penned the cover story because “the Iranian revolution has made it especially important for Westerners to understand the driving energy and devotion Islam commands from so many.”

Senior editor John Elson indicated that “Islam has been frequently misunderstood, partly because so many people have tried to apply terms from Christianity and Judaism to it.” In writing this article, the editors have attempted to draw a picture of Islam for what it really is, “a way of ordering society.”

According to Time magazine, there were 750 million Muslims and 985 million Christians in 1979, a large group ready to assert the “political power of the Islamic way of life.” The people of Iran apparently voted overwhelmingly to create an Islamic republic, the nation’s first “government of God,” as Ayatullah Khomeini declared.

This theocratic and freedom-stifling government replaced, after one year of revolution, “a dynastic autocrat who dreamed of turning his country into a Western-style industrial and secular state.” Changing a westernized society into a government by religious mullahs was described as “a new dawn for the Islamic people.”

Time magazine quoted the Cairo’s magazine, Al Da’wah (The Call): “The Muslims are coming, despite Jewish cunning, Christian hatred, and the Communist storm.”

And it came to pass – the Muslims are really coming, by the millions, invading Europe andAmerica, welcomed with open arms by a senescent and suicidal Europe ruled by technocrat elitists who are only interested in failed multi-culturalism, their power, control of the emerging tower of Babel, and their bank accounts.

Time magazine described the revival of Islam in the 70 countries around the world, reflected in the hajj, the pilgrimage to Mecca, unchanged for 14 centuries; this alleged revival took place among the young who desired sharia law, burkas, hijab and other forms of enslaving women to their half-person status, genital mutilation, and harsh punishments in cases of rape, divorce, adultery, and abortion.

Time magazine assumed that this alleged revival had taken place for decades because “Islam is no Friday-go-to-mosque kind of religion. It is a code of honor, a system of law and an all-encompassing way of life.”

This resurgence was inspired and fueled by a “quest for stability and roots,” a deep-seated hatred for Western values, and “the population explosion in those Islamic nations where birth control is little practiced.”

Marvin Zonis is quoted that “Islam is being used as a vehicle for striking back at the West, in the sense of people trying to reclaim a very greatly damaged sense of self-esteem. They feel that for the past 150 years the West has totally overpowered them culturally, and in the process their own institutions and way of life have become second rate.”

“Islam is a political faith with a yearning for expansion,” said Marguerite Johnson. And the history of its expansionist desires is quite telling, an expansionism that necessitated the Christian Crusades in order to regain territories occupied by Islam.

Arabs raided and conquered many lands and their traders carried Islam with them; the Persian Empire, the Byzantine Empire, North Africa into Spain, the Middle East, Malaysia, Indonesia, Singapore, the Philippines, the black tribes in Africa south of the Sahara Desert, were all forced into submission and conversion to Islam. Time magazine added that, “On the Indian subcontinent, in Southeast Asia, in Africa and the Pacific, millions of Muslims were under colonial rule.”

Time magazine remarked that “Islam is frequently stereotyped as unmitigatedly harsh in its code of law, intolerant of other religions, repressive toward women and incompatible with progress.” No mention is made of the Koranic quotes which advise their faithful to kill the infidels.

Salem Azzam, then Saudi secretary-general of the Islamic Council of Europe, was quoted as saying that seeing this Islamic resurgence in a negative light is nothing but a “return to colonialism – indirect but of a more profound type.”

Other Muslims and their defenders claimed that “Islam is not monolithic, that it is compatible with various social and economic systems, and that far from being a return to the Dark Ages, it is wholly consonant with progress.” The reality is that the Taliban had oppressed and regressed a thriving Afghan society.

The “war refugees” from Syria, who have invaded welfare-generous European countriesand are raping and pillaging the host societies, have gravely affected the very tolerant and multi-cultural nations who foolishly invited them in with open arms.

Devout Muslims are described in this article as opposed to the “materialism of the West and the atheism of Communism.” But they welcome “individual initiative, respect private property, and tolerate profits.” But moderation and “communal responsibility” are most important. Usury is forbidden but interest is allowed if used for the “common good.” Community and the common good are communist tenets. A zakat of 2.5%, levied against individual assets, was allowed for the benefit of the community.

A devout Muslim objects to the evils associated with modern life but enjoys everything free that the west must provide, such as welfare, housing, TVs, cell phones, cable, cars, electricity, A/C, etc. The Time article stated that Islam objects to “liquor factories,” to the “breakdown of the family structure, the lowering of moral standards, [and] the appeal of easygoing secular life-styles.” But Muslims “are demanding the best of the West: schools, hospitals, technology, agricultural and water development techniques.”

Devout Muslims, no matter where they live, are required to abide by Sharia Law, “the path to follow.” The consensus of Islamic scholars in charge and the deeds and sayings of Muhammad become an “all embracing code of ethics, morality and religious duties.” It is thus a complete control of one’s life.

Once entrenched in the western civilization, Muslims start chiseling at its foundation in an effort to turn it into Sharia-compliance; everything that made western schools, hospitals, agriculture, military, and technology great in the first place, will be replaced with what is approved by the Islamic theocracy.

No matter how the media spins Islam then and now, Sharia Law and our U.S. Constitution are not compatible. Moral relativism and tolerance to the point of ignorance will result in national suicide.

Ileana Johnson is a senior columnist for Canada Free Press, retired teacher with 30 years experience, best selling author of UN Agenda 21: Environmental Piracy at Amazon, author of Echoes of Communism, Liberty on Life Support, and the upcoming book Communism 2.0 Twenty-Five Years Later. She is also a radio commentator on Liberty Express Radio on Butler on Business, every Wednesday at 10:34 EST. I travel and speak on issues of interest to me, communism, education, economy, immigration, and UN Agenda 21. She has a doctorate in Economics and speaks five other languages. She is a legal immigrant and proud American citizen by choice.