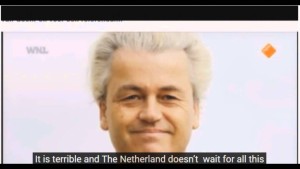 Dutch politician Geert Wilders warns that Islam and its teachings are a problem – not only for Europe but for America as well.

WASHINGTON — Dutch politician Geert Wilders has been labeled “Islam’s public enemy number one.” Consequently, he lives every day under a death sentence from Islamic jihadist groups like al Qaeda.

Wilders never walks the streets without a security detail and he and his wife must live in safe houses across the Netherlands. It’s the price he pays for speaking out against the Islamization of Europe.

“I don’t want to live – and my children to live – in a country based on Sharia law,” Wilders told CBN News. “It’s the worst thing that could happen. Democracy would end the day after Sharia was implemented.”

In his new book, Marked for Death: Islam’s War against the West and Me, Wilders lays out his argument against Islam and multiculturalism.

“If you walk through the streets of Amsterdam or Rotterdam or any other city in the Netherlands, you see that it has changed completely,” he said. “People often don’t feel at home anymore, don’t feel safe anymore.”

Wilders’ message resonates with many Dutch who are fed up with massive Muslim immigration. His Freedom Party is now the third largest in Holland.

His popularity only increased after he was found not guilty on hate speech charges in a Dutch court last year.

Wilders explained that what keeps him going in the face of such adversity is the need save his country from the cancer of “cultural relativism.”

“I believe that the biggest disease in Europe today is called cultural relativism,” Wilders told CBN News. “And I want to fight with all my life this misconception by politically correct, often liberal and leftist politicians, who invented the multicultural society, that all cultures are equal.”

Wilders calls them “the facilitators” — leftists who defend Islam while bashing Judeo-Christian civilization.

“I am proud to say that our culture – that is based on Christianity, on Judaism, on humanism — is not only better, far better, than what I see as a barbaric Islamic culture, and that we should fight to preserve it for our children,” he said.

Wilders wants to put an end to Muslim immigration to the Netherlands but says Muslims who assimilate into Dutch society are welcome.

“I even acknowledge the fact that the majority of Muslims in our free society are not terrorists, are law-abiding people,” he said.

“I don’t believe that there will be any moderate Islam–there is only one Islam, let me tell you, and that is the Islam of the Koran, of the hadith and of the Sira of Mohammed,” he continued. “That’s the only Islam.”

Wilders maintains, however, that Islam and its teachings are the problem – not only for Europe but for America as well.

“My message to the American people with my book,Marked for Death, is please, don’t make the mistakes we’ve made. What is happening in Europe can definitely happen in America tomorrow,” he warned.

Marked for Death: Islam’s War against the West and Me