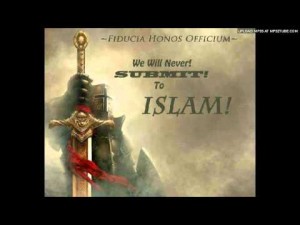 The terrible tragedy which has unfolded in Brussels this week has garnered less media focus than the events in Paris in November, which in turn took less time to be forgotten by media and politicians than the Charlie Hebdo massacre in Paris again, last January. So much so that Katie Hopkins rightly points out we are beginning to take the constant terror attacks against our Western societies for granted:

“We must not accept this terror as part of our everyday. We must look for strong leadership and implement obvious solutions” (Daily Mail)

Terror attacks on civilian targets inside the heart of our Western nations are being presented by our leaders as an unavoidable part of ‘modern life’. They are unwilling to make the clear and obvious link between the growth in our Muslim populations and the growth in terror. They are further unwilling to make the link between Islam’s teachings of hatred and violence towards us, the infidel, and the propensity of Muslims to engage in terror. Our ‘leaders’ refuse to admit the truth, that Muhammad himself, the inventor of Islam, was himself a terrorist.

“In one hadith Muhammad boasted, “I have been made victorious through terror”. Bukhari 4:52.220

In the last ten years of his life, after Muhammad migrated to Medina , he launched no less than 78 raids called qazwa (raid, ambush, sudden attack). Some of these qazwas involved the assassination of one opponent by one or a group of volunteers, and others were carried out by hundreds or thousands of warriors. Nonetheless a common characteristic of all Muhammad’s incursions was that they were done without notice. The enemy was caught off guard without being given the chance to prepare himself or be armed.  As such all Muhammad’s victims were civilians.” (Ex-Muslim Ali Sina’s Challenge –Muhammad was a terrorist)

When a population reveres as ‘perfect’ a man who was a killer, who led his men to commit terrorist raids and plunder the loot from unarmed civilian targets, is it any wonder that some of this population is destined to emulate him and commit terror raids in turn?

There are over 100 verses in the Koran aimed at inciting violence against the ‘infidel’ – the unbelievers, who by very dint of refusing to join Islam are deemed ‘aggressors’ – we are not the innocent which Muslims always point to in attempting to remove the tarnish of violence from their religion by quoting this verse:

Quran 2:190 Fight in the cause of God those who start fighting you, but do not transgress limits (or start the attack); for God loveth not transgressors.

Quran (8:12) – “I will cast terror into the hearts of those who disbelieve. Therefore strike off their heads and strike off every fingertip of them” No reasonable person would interpret this to mean a spiritual struggle.

Quran (9:5) – “So when the sacred months have passed away, then slay the idolaters wherever you find them, and take them captive and besiege them and lie in wait for them in every ambush”

Sadly even Muhammad proved that in the Islam he invented, ANY INFIDEL was ‘fighting against’ Muslims. Thus saying that Islam bars Muslims from attacking the innocent is highly disingenuous, and the constant attacks on the ‘infidel’ by Muslims (note: these can be ANYONE which Muslims consider to be transgressing, even Shia Muslims or Westernised Muslims) prove this without a doubt. Just today a Muslim shopkeeper in Glasgow was stabbed to death by Muslims for the ‘crime’ (in the Muslim mind) of wishing Christians a ‘Happy Easter‘. There’s TRUE hatred and intolerance – and the true face of Islam.

“Or is the West deluding itself? Is it possible we are the ones misreading the sacred books of Islam and what the triumph of Islam would mean for our civilization – because we lack the courage to face the truth and do what is necessary to avoid our fate?” (Pat Buchanan)

So now we hear that the Brussels bombers were also planning an attack against a nuclear power station in a heavily populated area 50 miles from Brussels. IS this really how we wish to live the rest of our lives, and is this the world we wish to leave our children? To live in constant fear of destruction by people whose religion openly, in black and white, urges them to hate us, the infidel? Isn’t it bad enough this exists in other parts of the world – but MUST it really occur on our streets in the West also?

For how long must we go on living in constant threat of destruction from Muslims, simply because our ‘leaders’ refuse to admit the plain truth? Islam teaches Muslims to hate us. When they attack us they are simply emulating their beloved Muhammad. Refusing to make this plain and obvious link is putting us in clear and present danger from these brutal men and women who follow a brutal faith. Until our leaders examine Islam and make the link between its hateful and violent instructions there will be no end to the danger the TRULY innocent people of the West are in from Muslims willing to take the orders of Islam to heart and act against us.

No amount of armed police on our streets will be able to stop ALL attempts at terror – there are so many Muslims clearly just itching to kill us. Just last year alone there was almost one arrest a day on terror charges in the UK alone. We seem to be so quick to forget but the West suffered several attacks on its soil last year alone, as well as the mowing down of British holidaymakers in Tunisia.

“The word Jew itself is dirty. If I were in Israel, frankly, I would do to the Jews what they do with the Palestinians — slaughter each and every one of them,”wrote a Muslim officer in Belgium.

So it’s up to us to decide. Are we happy to go on living in dread of the next terror attack for the sake of not having to speak frankly? Islam is THE problem of our age – and the Muslims who love a terrorist ‘prophet’ and a faith that teaches them to hate us are all potential terrorists. Our once peaceful and civilised countries have been turned into war zones by Muslim terrorists. How much longer must we tolerate this? And are we tolerating this death and destruction simply out of fear of appearing intolerant?