There is a Parasite in the American Church

Previous Next
There is a Parasite in the American Church 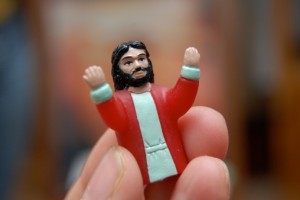 Editor’s Note: Dr. Richard Ross is one of America’s foremost experts on youth ministry. Even if you’re not interested in youth ministry, Ross’ observations on the American Church inform us not only of where the church is currently, but where it’s headed.

Who is God’s Son today and why does it matter? At the moment of his second coming, Christ will appear more majestic and powerful than we can possibly imagine. He will split the heavens. All humanity will see him for who he is. Who Jesus will be on that day is the same Jesus that he is today.

But do we really see Jesus this way? When you pray, when you worship, when you go about your daily routines and activities, do you see Christ on his throne?

In the Old Testament, God spoke through the prophets, but in later years, God chose to reveal himself most clearly in his Son. When the Son had made purification of sins, he was enthroned at the right hand of the Majesty on high. The Father then announced that in this age of the Church, God the Son is to have supremacy.

But in the United States in the 1960s, things began to go wrong.

Parasite in the Pews

Believers generally shifted their primary focus from seeing Jesus as the exalted Lord and King whom they should worship and serve to expecting him to serve them by blessing them with more prosperity, comfort, and happiness. They still liked Jesus and they still wanted him around, but just as their church mascot and a divine addendum to their pursuit of the American dream.

Professor Kenda Dean suggests that a parasite entered the American church. This parasite, later to be named “moralistic therapeutic deism,” quietly began to eat away and suck the life out of the true Christian faith.

In our day believers still speak of Jesus but mostly about the days he walked on earth. They are more likely to picture him sitting on a big rock with giggling children on his lap than reigning from the throne of heaven. Sermons, Bible lessons, and church hallway conversations are almost completely devoid of any focus on the transcendent majesty of who the Son is today.

One of America’s best-known worship leaders recently confided a heartache to David Bryant. He said:

Often it feels to me as if, for many of our people, singing praise songs and hymns on a Sunday morning has turned into an affair with Christ . . .  Too many of us are far more passionate about lesser, temporal concerns . . . But we rarely ever get that excited about Christ Himself, at least on any consistent basis. Except when we enter a sanctuary on a Sunday. Then for a while we end up sort of ‘swooning’ over Christ with feel-good music and heart-stirring prayers—only to return to the daily grind of secular seductions to which, for all practical purposes, we’re thoroughly ‘married.’

Many church members have slipped so far in their view of Christ that they need to be introduced to him all over again.

I often hear church teenagers say, “I just love Jesus. He’s always there for me.” It’s as if they have a little buddy who rides in their pocket. This little Jesus stays out of the way until they need to pull him out and “poof” some problem or difficulty away. Then they can put him back in their pocket to be mostly irrelevant to their lives until they need him again. It’s a little Jesus.

We have spent decades talking about the centrality of Christ but almost never about the supremacy of Christ.

Centrality is about keeping Christ at the center of who we are, where we are headed, and all we are doing. Supremacy speaks of so much more. Supremacy proclaims Christ’s right to keep us at the center of who he is, where he is headed, and how he is blessed. Jesus does not exist to come down here and make my life a little easier. I exist to stand before him in awe-filled worship and to join him in bringing his kingdom on the earth. It’s never all about me. It’s always all about him.

Praying for a Christ Awakening

But our sovereign God is always achieving his sovereign purposes. Just now there is every indication the Father and the Spirit are initiating a movement—waking the Church to the reigning glory of the Son. A growing number of us are praying for a full Christ Awakening in the American church and throughout the world. A Christ Awakening unfolds whenever God’s Spirit uses God’s Word to reintroduce God’s people to God’s Son for all he is.

The fulfillment of this hope and dream begins when the Spirit awakens believers to the majesty of the Son for the glory of the Father. In your church perhaps that awakening will begin with you. Maybe the Spirit will immerse you in resources and ministries about the current majesty of the Son. (That’s what ChristNow.com is all about).

Then perhaps your new vision of the enthroned Christ will splash into the lives of those around you so you are all filled with wonder concerning King Jesus. Then maybe, just maybe, a Christ Awakening will flood us all.

ABOUT THE AUTHOR: Dr. Richard Ross

Dr. Richard Ross is a professor to the next generation of youth ministers at Southwestern Seminary in Fort Worth, Texas. He has authored many resources, including his latest book, The Senior Pastor and the Reformation of Youth Ministry. You can connect with Richard on his website, Facebook, or Twitter.