Previous Next
The Iowa State Senate Prays to Allah – Twice 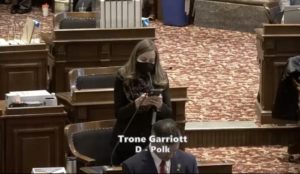 The Iowa State Senate opens each daily session with a prayer. On February 8, State Senator Sarah Trone Garriott (D) “shared a prayer” written by one of her constituents who was a Muslim. The prayer was to Allah and included references to a number of Allah’s 99 Names.[1] It is interesting that the Iowa State Senate prayed to the Muslim god Allah, even though there are no Muslim members of that Senate. And it is even more interesting that these state senators bowed their heads in prayer to a god who curses Christians and Jews and condemns them to Hell.

Here is what Allah has to say in the Koran about Christians and Jews:

Christianity is considered to be a false religion because Allah states that Jesus was not crucified, but it only appeared so (4:157-158). Islam teaches that Allah took Jesus bodily into paradise and made one of Jesus’ disciples look like Jesus; it was that disciple who was crucified. So Muslims who know their religion look at a crucifix or a painting of the Crucifixion and see an imposter hanging on the cross. And of course, if there was no Crucifixion, there was no Resurrection. So Islam teaches that Christianity is a false religion based on a fraud.

According to Koran 4:80, Muhammad spoke for Allah. Here is some of what Muhammad had to say about Christians and Jews:

Here is what Allah’s prophet Muhammad specifically said about Jews:

This was not the first time the Iowa State Senate had opened a session by praying to Allah. On April 7, 2014, the opening prayer for the Senate that day was given by Des Moines Imam Mohammad Khan. In Arabic Khan recited the first chapter of the Koran – Al-Fatihah (this was confirmed by a native Arabic speaker).[12]

Al-Fatihah consists of only seven verses. Let’s focus on the last two verses. In Verse 6 Muslims ask to be guided to the Straight Way. Allah’s prophet Muhammad said the Straight Way (or Path) was Islam.[13] The modern Tafsir Ahsanul-Bayan explained the meaning of the Straight Path:

The Straight Path here means the religion of Islam as enshrined, enunciated and explained in the final Revelation, the Qur’an, and the authentic sayings and acts of Allah’s Messenger, called hadeeth.[14]

The Muslim scholar Ibn Kathir explained these two deviations from the Straight Way:

These two paths are the paths of the Christians and Jews, a fact that the believer [Muslim] should beware of so that he avoids them. The path of the believers is knowledge of the truth and abiding by it. In comparison, the Jews abandoned practicing the religion, while the Christians lost the true knowledge. This is why ‘anger’ descended upon the Jews, while being described as ‘led astray’ is more appropriate of the Christians…We should also mention that both the Christians and the Jews have earned the anger [of Allah] and are led astray, but the anger is one of the attributes more particular of the Jews.[17]

So Allah is actually angry with both the Jews and Christians!

On two different occasions now the members of the Iowa State Senate have bowed their heads and prayed to Allah, the god of Islam, who curses the Christian and Jewish senators in that body and condemns them to Hell. It takes some thick skin to be a Christian or Jewish elected official in the Iowa State Senate.

Dr. Stephen M. Kirby is the author of six books about Islam. His latest book is Islamic Doctrine versus the U.S. Constitution: The Dilemma for Muslim Public Officials.

[2]           For an in-depth look at how the Koran and Muhammad differentiated between the “believers” (Muslims) and the Jews and Christians, see my article “The Fantasy Islam of the University of Chicago’s Fred Donner (Part 1),” Jihad Watch, January 30, 2019, https://www.jihadwatch.org/2019/01/the-fantasy-islam-of-the-university-of-chicagos-fred-donner-part-1.

[3]Shirk: polytheism, worshipping others along with Allah, and/or ascribing partners to Allah (including ascribing a Son to him). By believing that Jesus is the Son of God, Christians commit Shirk.

Muslim, or the servant of Allah, there is a Jew behind me; come and kill him; but the tree Gharqad would not say, for it is the tree of the Jews.

Commentary about the Christians being those who had gone astray is found in: Tafsir Ibn Kathir, Vol. 1, p. 87; Tafsir Ahsanul-Bayan, Vol. 1, p. 24; and Tafsir Al-Jalalayn, p. 2.