Pegida launches in the UK – and media response tells us why it is needed. | Examine Islam

Previous Next
Pegida launches in the UK – and media response tells us why it is needed. | Examine Islam 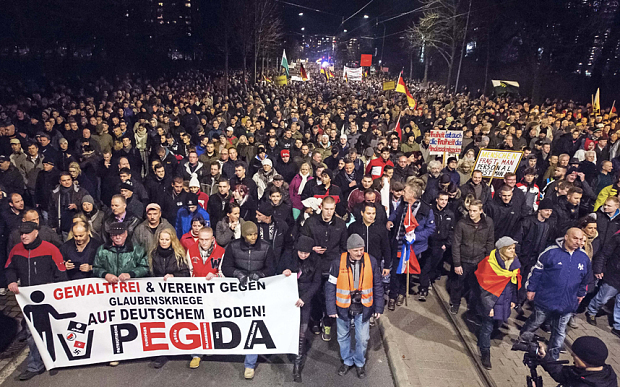 Sky News reported the launch of Pegida UK by stating:

“The group has called on people to resist what it claimed is the rise of Islam, but it has been accused of stirring up hatred.”

The media response to the launch of UK Pegida is telling – unstinting in its criticism of the movement as ‘far-right’, focusing on the imagined ‘hatred of Muslims’ rather than examining the reason for its emergence – the influx of Muslims being forced upon the people at a time when post 7/7, post Lee Rigby and post Tunsia and Paris we are being attacked by Muslims as never before. The influx of Muslims who will not give up on their love of Islam and its inherent hatred of the infidel – in other words – us.

Pegida is a movement which begun in Dresden, Germany to oppose the Islamisation of the West. Pegida’s silent marches have in the past fielded upwards of 30,000 protesters. Pegida Cologne in Germany is planning a major new demonstration after the mass sexual assault of German women by Arab and African men on New Year’s eve. Demonstrators come from all strata of society from housewives to teachers and lawyers.

Mock executions have been staged to highlight the drastic and violent intolerance and lack of freedoms in Muslim countries. Muslims living in the West and abroad have attacked Westerners and non-Muslims at a regular and increasing pace since 9/11, (Bali, Paris, Madrid, London, Boston, Mumbai, Tunisia, Lee Rigby, Boko Haram, ISIS are but a few of the long list of terror attacks on us).

Jihadi John the evil ISIS beheader in chief was himself the son of Asylum seekers who never worked and whose entire lives were paid for by the British. The Boston bombers equally were the sons of an Asylum seeker in the US.

The hatred for non-Muslims by the Muslim world is perfectly evident in the core texts of Islam, and undercover reporters have shown that in London’s Mosques this hatred is being preached daily to packed congregations of Muslims. The constant killings across the world by Muslims against non-Muslims is testament that these teachings are being upheld by Muslims. It is simply incumbent upon our leaders to act against Islam now in order to protect the people.

Instead, they keep telling us to accept more and more destitute Muslims (because sadly praying and fighting are not conducive to material success and advancement) – each time expecting different results and feigning surprise when time and again Muslim immigrants slaughter Westerners in our home lands.

“It is the nature of Islam to dominate not to be dominated; to impose its laws on all nations and to extend its power to the entire planet.” Hasan Al-Banna founder of the Muslim Brotherhood.

If you argue that it is not a Muslim’s fault that he or she was born Muslim then I would say no it is not – as long as they are children.

However, all adults have free will and the right to choose in the free West. If an adult Muslim chooses to come and live in the non-Muslim world and learns that other Muslims are attacking that world it is incumbent upon that individual to decide – am I with this world of freedoms or against it? Am I going to renounce this faith I was born in which teaches that my protectors and benefactors are sub-human or am I going to remain loyal to a doctrine of hatred and violence towards them?

Any Muslim who chooses to remain a Muslim in light of this should be helped to go back to a Muslim nation where he or she will be able to be Muslim all they like. There are 50 of these so it should not be too difficult to arrange. After all, unlike Muslims, we in the West do not believe that those who do not believe in what we believe should be killed:

“…The penalty for those who wage war against Allah and His Messenger …. is none but that they be killed or crucified or that their hands and feet be cut off from opposite sides or that they be exiled from the land.” [Quran 5: 33]

This is why Pegida UK is such an important movement, and why its leaders are so brave. Intolerance of Intolerance is nothing more than the right thing to do. Speaking out about it is brave as Muslims like to issue death threats and Fatwas to anyone whom they disagree with. This very website receives daily attacks from such people. The truth hurts.

Tommy Robinson, Anne Marie Waters and Paul Weston are heroes. But looking at the apathy and nonchalance of the British people it seems there is a long way for this movement to go, especially when our media and politicians are unanimously agreed that Islam is merely a benign ‘religion’ like any other. Most people simply do not care. Perhaps mass rapes as in Germany or mass shootings as in Paris will make some awaken to this threat.

In fact Islam is anything but a religion like Christianity – Tommy Robinson is entirely correct in saying that “Islam is a Fascist Ideology” – it is Islam which enjoins its faithful to “Slay the idolaters wherever you find them, and take them captive and besiege them in every ambush” Quran (9:5) – not Pegida nor critics of Islam. No matter how much the Left would wish it so, we critics of Islam are not advocating violence or hatred – simply that our leaders do the job we elected them to do and protect us from an army of people who passionately love a psychopath – Muhammad, and are all too ready and willing to act upon his teachings on a regular basis.

As Paul Weston rightly says, the media and politicians are obsessed with preventing imagined ‘Islamophobia’ yet treat every new attack by Muslims against us as unrelated to Islam’s teachings of intolerance and hatred. It is not Muslims who are under threat from critics of Islam – it is us, the people of the West who are being exposed to the hatred and violence of Muslims, and left unprotected by our politicians so they may appeal to the Left’s need to feel good about being nice to brown folk.

In fact it is we who oppose Islam who want to PRESERVE the hard-won freedoms and tolerance of the post WWII era in the West. We have fought hard for equal rights and enshrined tolerance in the law. It is Islam and its adherents, Muslims, who believe that Sharia or Islamic law should over-rule our laws, who stand for intolerance and division. It is Muslims who are killing and will continue to kill us because of their ideology of hatred and violence – it is NOT the critics of Islam.

We who criticise Islam are being falsely compared to Hitler’s Nazis. In fact Tommy Robinson and Anne Marie Waters are huge supporters of Israel – as am I. We wish to protect Jews, as well as the rights of women, gays and non-Muslims – rights which in Muslim countries are non-existent.

Jews must hide their Jewishness in the West for fear of increasing attacks in the West from Muslims and women must dress conservatively or risk being raped by a frenzied Muslim. So surely it is the Left and Muslims who should be compared to Nazis – it is they who support the evil BDS movement and who are pro-Palestine’s terrorism of Jews in Israel.

It is not Jewish Pamela Geller who incites hatred but the pro-Islam lobbies and the Left which would rather Jews and vulnerable women and children be sacrificed for their beliefs. For it is the Left and those who support Islam who have turned a blind eye to the continued sexual exploitation of non-Muslim women and children across the UK by Muslim men.

It is the Left and Islamophiles who would rather German and Swedish women wear a Burka in order to remain safe from Muslim rapes and sexual assault rather than call out the inherent sexism and misogyny in male Islamic culture which they are importing in their thousands. The female Mayor of Cologne has told women they should have a ‘code of conduct’ to prevent future attacks – rather than pointing to the perpetrators and their heinous woman hatred.

It is the Left who prefer the hijab to the Christian cross, despite the fact that Christians today are among the most tolerant and benign of religious people. It is the Left who would rather the poor and the homeless remained uncared for with Muslim ‘refugees’ being given all comforts. It is the Left who would rather focus of the narrative that ‘Even Muslims are the victims of ISIS’ in preference to the truth that Christians in Syria dare not go to the UN refugee camps because there, Muslim refugees would also attack them. It is the Left which ignores the truth that wherever in the world they live, Muslims attack the host nation and demand more and more that the host nation bends to their needs – Muslims NEVER assimilate.

Simply look at the attacks on the Philippino Christians by Muslims there. Simply remember that Indonesia and Malaysia were not always Muslims but Hindu and Buddhist – and the same goes for Pakistan, Bangladesh and Afghanistan. The entire Middle East and countries like Turkey and Albania which are now almost entirely Muslim were previously to Muslim colonisation Christian, Jewish, pagan. This is the future for the West unless we deport all Muslims immediately.

Sunni and Shia Muslims have been at loggerheads recently which has resulted in Sunni nations deporting Shia residents for ‘peace’. Clearly, when it suits Muslims, it is fine to deport those they believe are counter to their own peace. So when will our governments start taking the obvious measures to secure the peace of non-Muslims in what is still the non-Muslim West? Rather than pandering to imagined tales of ‘Islamophobia’ by Muslims, our leaders should be deporting Muslims – it is clear. Muslims do it in their own countries, why should we not? Instead they bring more and more Muslims in and increasingly lump critics of Islam in with ISIS sympathisers as ‘extremists’. This is why Pegida UK is needed – to speak out for the people against the injustice of our own government destroying our Christian heritage and the safety of the people by foisting the hateful and violent ideology of Islam upon us. David Cameron pandering to arch terrorist funders Saudi Arabia makes this all too clear – we cannot trust our elected representatives who have the police protection to speak out for us. So we need people like Tommy and Anne Marie to do it instead – despite the fact that they are putting themselves at risk in doing so. God-speed to them and their movement – they are true heroes of our time.