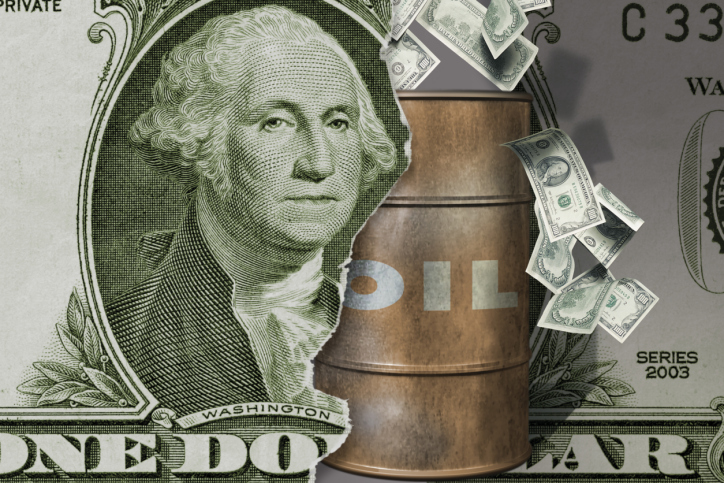 Saudi Arabia’s drifting dunes flow and ebb over 268 million acres of crude-filled desert, making it the oil-richest nation in the world.

America, once the richest nation in the world partly because of its own gigantic domestic oil reserves that flowed like our own rivers and lakes, is on its way to second-class status as a world power because the powers that be are choking off our new oil reserves, and letting the dollar-denominated debt flow instead.

At the core of this entire shift in power is a major change in players and ideologies leading up to our 21st century. And whether or not you think oil is the perfect fuel until a replacement can be found, or you want to see its obsolesce because of climate change, one thing is clear – An America that was once an oil leader has gone blind on oil.

Not to go all 7th grade history lesson on you, but remember that following World War II and under the tutelage of Presidents Franklin Roosevelt and Harry Truman, Saudi Arabia clearly fell under influences of the United States. We exchanged state-of-the-art military technology and protection for oil security.

However, in a very few short years the smooth political relationship between Riyadh and Washington was beginning to frazzle. In 1965 OPEC – which was founded in Iraq, by the way, and whose headquarters since 1965 has been tucked safely away from the Middle East in Vienna (what does that tell you about what they knew was coming?) – believed it was giving away its non-renewable resource for pennies on the dollar.

Also OPEC, as well as the Pentagon, believed that the Middle East was becoming the most strategic region in the world. Proxy wars were repeatedly begun in the region with the real goal being influence in a region that had a trillion barrels or more of the most important energy source in the world.

However after years of these wars not raising the price of oil significantly, and because the U.S. staunchly supported Israel —  especially in the 1973 war — Egypt (to whom we now give billions of our treasure in foreign aid) Saudi Arabia, Iran and the OPEC nations decided to launch an oil embargo on the West. Arab oil producers cut off exports to the U.S.

“The oil crisis set off an upheaval in global politics and the world economy. It also challenged America’s position in the world, polarized its politics at home and shook the country’s confidence,” author and oil analyst Daniel Yergin wrote in an op-ed in the Wall Street Journal.

With rising oil prices, America’s ingenuity and technological know-how swung into effect. New drilling and extraction techniques allow producers to grab millions of barrels of oil from huge shale deposits. America was on the verge of becoming a net exporter of oil.

Saudi Arabia couldn’t have that. It was bad enough when Russia started pumping millions of barrels, and then the tar sands of Canada began to produce, and then huge reserves were found in South America…

And now the United States has made a deal with Saudi’s biggest rival in the Middle East? This last straw provided a green light for Saudi Arabia to keep pumping oil and create a perceived glut, so that oil now trades around $30 a barrel, putting shale extractors and tar sands producers out of business.

The U.S. oil rig count went from less than 200 in 2009, to more than 1600 last year. It has since cratered to only 400. At this rate, the oil rig count will be zero by August, according to Morgan Stanley’s Ole Slorer. He says there are only a very small number of rigs in the U.S. that can operate with oil prices below $30 per barrel.

Do you think the Saudis didn’t know this?

The original appreciation in oil price stabilized and brought profits to the domestic oil companies, providing boon years for North American oil and gas that had not been seen since the days of Standard Oil.

But Washington – especially the Democrats – traded oil security for Green Dreams. They wrung their hands over green energy, and pumped funny green money into the economy while the Saudis pumped oil, and all the while, U.S. oil became cheaper while the Middle East sold more.

Worse, under the pretense of preventing climate change allegedly caused by burning North American petroleum, President Barack Obama has twisted the screws tighter and tighter on America’s oil industry, disregarding profits or American strength in the world. The last thing on Obama’s mind is oil security.

Far more interesting to him is his legacy which rightly or wrongly he believes will be inflated by his stark discrimination against oil and gas. The degrees to which Obama went to hurt American oil and gas and production have been made painfully clear.

This last month Obama set his sites on members of Congress who want to resist his squeezing the oil industry.

It hasn’t made much news, but Obama is going to ask lawmakers — when he releases his final budget proposal — to approve a $10 tax on every barrel of oil to pay for a long-term infusion of spending on infrastructure. Coming from a lame-duck Democratic president, the proposal is, plainly, a non-starter in the Republican-led Congress.

House Majority Whip Rep. Steve Scalise (R-La.) said in his address heard on ABC Radio that the tax is “dead on arrival” in Congress. He said, “The president will try anything he can … to keep American-made energy trapped in the ground.”

But the idea is sure to jumpstart the debate over energy and infrastructure in this year’s presidential campaign; a campaign loaded with Middle East money which has already found its way to the Clinton Foundation, pro-Green lobby groups, and towards electing Hillary Clinton president later this year.

The country that produced some of the biggest oil companies in the world and won two World Wars is now losing to Islamic oil and Green politicians.

Yours in good times and bad,

This entry was posted in Featured and tagged Oil Price. Bookmark the permalink.