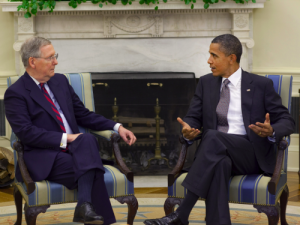 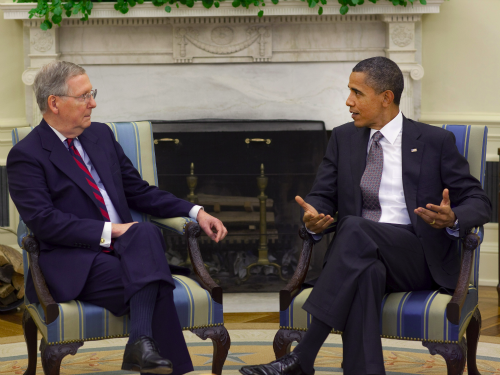 In his final State of the Union address, President Obama chastised Congress for not giving him the authority to go to war with ISIS (or support them as many Iraqi’s believe) saying “If this Congress is serious about winning this war, and wants to send a message to our troops and the world, you should finally authorize the use of military force against ISIL.”Following that address, he probably didn’t expect two Republican Senators to push for a bill that would give him even more authority than he asked for.

Earlier this week, Senator Mitch McConnell fast tracked a bill written by Senator Lindsey Graham, which would give Obama the Authority to officially deploy our military against ISIS and then some.

WASHINGTON — Senate Majority Leader Mitch McConnell (R-Ky.) caught nearly everybody off guard late Wednesday by quietly clearing the path for new legislation to declare war on the self-described Islamic State — an issue he’d signaled for months he had no interest in touching.

McConnell introduced a sweeping authorization for the use of military force, or AUMF, that would give the president new authority to take action against the militant group also known as ISIS or ISIL. It wouldn’t put any limits on the duration, geography or use of U.S. ground combat troops in the war, or on the means by which the U.S. military could act. It also would keep in place a broad AUMF from 2001 that never expired and that allows the president to take military action against anyone, anywhere, connected to the terrorists behind the 9/11 attacks.

In other words, it’s a war authorization that’s as wide open as it gets.

Make no mistake, this doesn’t grant Obama the authority to strike ISIS. This gives him unlimited war powers in the broadest sense. ISIS has popped up all over the world. Countless insurgencies and terrorist groups have aligned themselves to the group. They encourage Muslims in every country to conduct terror attacks in their name, even if they’ve never met that person. ISIS isn’t just a group of zealots in Syria and Iraq. They are a banner which people can rally around, which means that ISIS can technically be anywhere.

In other words, this AUMF wouldn’t just give Obama permission strike ISIS anywhere in the world. It gives him the ability to deploy our military anywhere in the world, foreign or domestic, for an undetermined period of time, at the mere suggestion that ISIS is there. And it won’t be hard for them to prove ISIS is there, since anyone can wave their flag and carry out attacks in their name.

By now this should all sound very familiar to you. 9/11 invoked the same response from our government. They declared a War on Terrorism, which is nothing more than a tactic that anyone could use, thus allowing our government to take its war machine into any country on the planet.

But after the Bush administration fell out of favor with the American public, so too did theWar on Terror. The war never stopped of course, but the term has lost its emotional charge, and isn’t used very often anymore. This bill aims to bring back the same sentiment with different words. It’s the War on Terror 2.0, which will henceforth be dubbed “The War on ISIS,” coming to a town near you.

Joshua Krause is a reporter, writer and researcher at The Daily Sheeple. He was born and raised in the Bay Area and is a freelance writer and author. You can follow Joshua’s reports at Facebook or on his personal Twitter. Joshua’s website is Strange Danger.