NOTE BY J.I.KAHN: Minnesota has been (DFL) DhimmiForLucifer controlled for many years. It will soon be comparable to Dearborn, Michigan and controlled by evil Islamists. On the other hand since the Dhimmi’s don’t even know what a Dhimmi is or what taqiyya (http://www.islam-watch.org/Warner/Taqiyya-Islamic-Principle-Lying-for-Allah.htm) means (snore), until the knife is seen, they will enjoy.  Perhaps Chrislam will dominate. Might even save some lives ) well on a physical level at least. Spiritually there seems to be no escape there.

“Despite the grisly scene, investigators concluded within two hours that David Crowley was the one who pulled the trigger…”

With no apparent evidence, the police quickly determined the messages had nothing to do with Islam. In fact, investigators think they were a jab at his wife’s Islamic past. 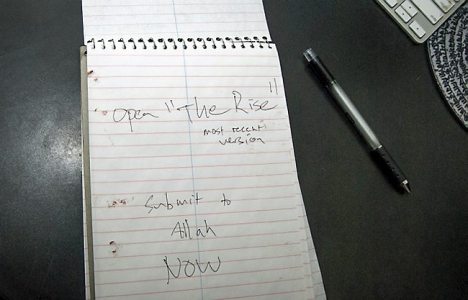 David Crowley was a screenwriter and aspiring filmmaker working on his first independent film.

Komel Crowley was a registered dietitian who, like her husband, mostly worked from their Apple Valley home.

Together, they were raising their 5-year-old daughter, Raniya — a bright kindergartner who rarely missed a day of school.

But that illusion vanished a year ago, when all three were found fatally shot Jan. 17 in the living room of their rambler in what investigators immediately said pointed to an apparent murder-suicide three weeks earlier.

Police found an Arabic phrase, written in blood, on a living-room wall.

They also found a spiral-bound notebook open to a page with dried blood on it with the words, “Submit to Allah NOW.”

“What it all adds up to is this was a guy who snapped,” Apple Valley Police Chief Jon Rechtzigel said. “To cross that line, to go to that level of violence — and this is domestic violence, make no ifs ands or buts about it … I mean, you take the lives of your daughter and your wife and besides that you’re writing things on the wall in blood. Nobody thinks to do that unless they’re really of a deranged mind at that point.”

Apple Valley police recently closed the case, which included a year-long examination by the Dakota County Electronic Crimes Task Force into 16 hard drives found in the home in the 1000 block of Ramsdell Drive.

A copy of the 94-page police file released to the Pioneer Press sheds light on the mind-set of David Crowley before police say the Owatonna, Minn., native killed his wife and daughter execution-style and then ended his own life with a bullet to the front of his head.

Despite the grisly scene, investigators concluded within two hours that David Crowley was the one who pulled the trigger of the .40-caliber Springfield handgun, found next to his body. 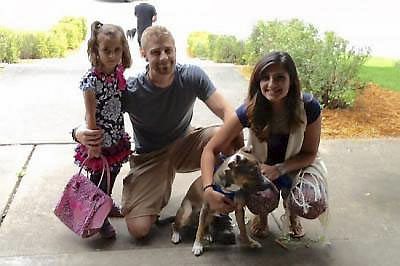 Six days later, the Hennepin County medical examiner’s office confirmed that the deaths of Komel, 28, and Raniya were homicides, while Crowley, 29, died of suicide.

Each died of a single gunshot wound to the head around Dec. 26, 2014, and the medical examiner’s office did not find marks or injuries on the bodies suggesting physical struggle before their deaths.

Police couldn’t tell how long Crowley was alive as his wife and daughter lay dead and before he turned the gun on himself, according to reports in the case file.

In the living room where their bodies lay, Crowley scrawled on a wall in his wife’s blood the Arabic phrase, “Allahu Akbar,” meaning “God is greatest.”

Investigators believe the words were Crowley’s “last little shot by him, a sarcastic thing aimed at (Komel’s) Muslim past,” Rechtzigel said.

Komel Crowley was raised Muslim in Pakistan and converted to Christianity when she married David Crowley; they met while he was stationed in the Army in Texas in 2008.

What led investigators to believe that? Nothing that they’ve revealed. She converted from Islam and married him, why would he ridicule her for that?

Maybe Crowley converted to Islam. After all, he did write, “Submit to Allah Now” in his notebook. Or perhaps someone who knew that Komel converted to Christianity doled out the Islamic punishment.

The official story – already a year old – simply doesn’t make any sense and the media won’t bother digging any deeper.