“Islam is not so much a religion, but more an ideology” – Geert Wilders — RT News

Previous Next
“Islam is not so much a religion, but more an ideology” – Geert Wilders — RT News 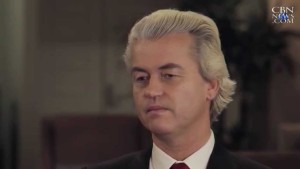 Far-right Dutch politician Geert Wilders told RT that Islam wants to rule and dominate not only all aspects of one’s life, but all aspects of society.

Islam should not be compared to other religions, like Christianity, Judaism or Buddhism, Wilders added.

The highly controversial politician also said he wants to halt the immigration of Muslims, despite the fact he agrees that the majority of Muslims are peace-loving and law-abiding.

“The majority of Muslims in our Western societies are law-abiding people like you and me,” Wilders said. “Still, I want to stop the immigration of people from the Islamic countries because they still bring a lot of culture that is not ours. Look at all the countries for instance in the Middle East where Islam is dominant – you see no rule of law, no functioning parliament, no civil society.”

Geert Wilders has also released an anti-Islamic movie entitled ‘Fitna,’ which compares the Koran to Hitler’s autobiography ‘Mein Kampf’. The short film has sparked widespread outrage, and not just among adherents of Islam.

Wilders has recently screened his film to Britain’s most senior lawmakers, and his bringing the movie to the UK triggered protests in London from all segments of society regardless of religious affiliation.