“‘I believe Islam killed my daughter’

Previous Next
“‘I believe Islam killed my daughter’ 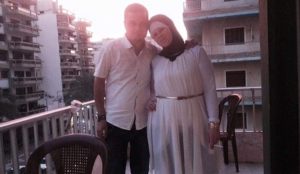 A grieving mother tells how her daughter cut off all contact with family and friends to marry an older Muslim man who left her on a bathroom floor for FIVE DAYS to die,” by Stephen Gibbs, Daily Mail Australia, July 10, 2018 (thanks to The Religion of Peace):

Siobhann Brown had not heard from her eldest daughter since she called five years earlier saying she was converting to Islam to get married and have her first child.

Then two Victoria Police detectives arrived at her door.

Ashlee Brown, 25, had been found dead on her bathroom floor with more than 100 blunt and sharp force injuries covering most of her body.

The mother of three children under five had been bound, gagged and had her long strawberry blonde hair cut off.

Ashlee’s husband Mohamed Naddaf, 37, told police he had found his wife in that state in their garage about five days earlier but chose to ‘care’ for her in the bathroom rather than call Triple 0.

Ms Brown had to run out of her house in disbelief when she heard how her daughter died. She is now faced with Naddaf pleading guilty to manslaughter, without ever going to trial.

‘Ashlee was a fun-loving girl,’ Ms Brown told Daily Mail Australia. ‘She was giving. She was loving. She loved the sun, the beach. She loved singing, dancing, having fun.’

Ashlee had been raised in country Victoria as a ‘typical Aussie girl’ and gradually grew restless as she hit her late teenage years.

She took increasingly regular trips to Melbourne, once returning to introduce her family to Mohamed Rannaf when she was was about 18.

‘She introduced him as “Macca”,’ Ms Brown said. ‘It was very brief.

‘He seemed like a nice, very polite, young man. It pains me to say that. I didn’t see him again after that.’

There was no communication for some time before a phone call came ‘out of the blue’ that would herald the end of all contact between Ms Brown and her daughter.

When Ashlee was about 20 she rang to say she was pregnant and wanted her mother’s blessing to convert to Islam and marry Mohamed.

‘She said to me, “Mum, I need your blessing to become Muslim”. She said “I’m three months’ pregnant and I’m engaged to Mohamed. I would really like to marry him, mum, and settle down and have a baby”.

‘I said to her, “Darling, I don’t know anything about the Muslim religion. As long as you know what you’re doing.

‘I said, “Do you have to wear one of those burqas or hijabs? I didn’t know what they were called.

‘She said, “No mum, only when I go into the mosque because it’s disrespectful for a woman to show her face before God”.

‘I said to Ashlee, “As long as you’re making a fully informed decision and it’s what you really want”.’…