Previous Next
Hugh Fitzgerald: Switzerland: What’s in a Handshake? 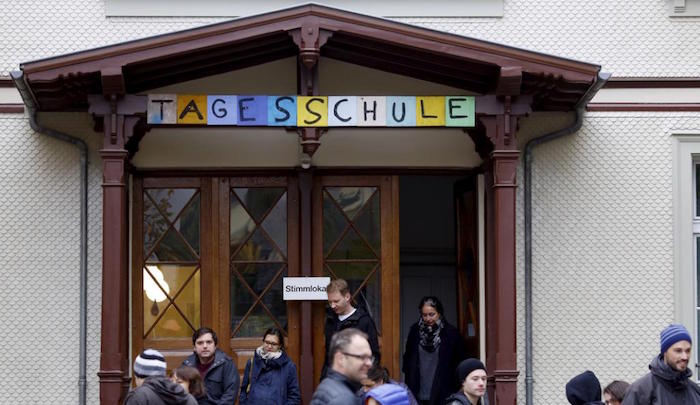 Sometimes it’s the little things that are most telling. In Switzerland it has long been customary for students to shake the hands of their teachers at the beginning and end of the school day. It’s a sign of solidarity and mutual respect between teacher and pupil, one that is thought to encourage the right classroom atmosphere. Justice Minister Simonetta Sommaruga recently felt compelled to further explain that shaking hands was part of Swiss culture and daily life.

And the reason she felt compelled to speak out about the handshake is that two Muslim brothers, aged 14 and 15, who have lived in Switzerland for several years (and thus are familiar with its mores), in the town of Therwil, near Basel, refused to shake the hands of their teacher, a woman, because, they claimed, this would violate Muslim teachings that contact with the opposite sex is allowed only with family members. At first the school authorities decided to avoid trouble, and initially granted the boys an exemption from having to shake the hand of any female teacher. But an uproar followed, as Mayor Reto Wolf explained to the BBC: “the community was unhappy with the decision taken by the school. In our culture and in our way of communication a handshake is normal and sends out respect for the other person, and this has to be brought [home] to the children in school.”

Therwil’s Educational Department reversed the school’s decision, explaining in a statement on May 25 that the school’s exemption was lifted because “the public interest with respect to equality between men and women and the integration of foreigners significantly outweighs the freedom of religion.” It added that a teacher has the right to demand a handshake.Furthermore, if the students refused to shake hands again “the sanctions called for by law will be applied,” which included a possible fine of up to 5,000 dollars.

This uproar in Switzerland, where many people were enraged at the original exemption granted to the Muslim boys, did not end after that exemption was itself overturned by the local Educational Department. The Swiss understood quite clearly that this was more than a little quarrel over handshakes; it was a fight over whether the Swiss would be masters in their own house, or whether they would be forced to yield, by the granting of special treatment, to the Islamic view of the proper relations between the sexes. It is one battle – small but to the Swiss significant – between o’erweening Muslim immigrants and the indigenous Swiss.

Naturally, once the exemption was withdrawn, all hell broke loose among Muslims in Switzerland. The Islamic Central Council of Switzerland, instead of yielding quietly to the Swiss decision to uphold the handshaking custom, criticized the ruling in hysterical terms, claiming that the enforcement of the handshaking is “totalitarian” (!) because its intent is to “forbid religious people from meeting their obligations to God.” That, of course, was never the “intent” of the long-standing handshaking custom, which was a nearly-universal custom in Switzerland, and in schools had to do only with encouraging the right classroom atmosphere of mutual respect between instructor and pupil, of which the handshake was one aspect. The Swiss formulation of the problem – weighing competing claims — will be familiar to Americans versed in Constitutional adjudication. In this case “the public interest with respect to equality” of the sexes and the “integration of foreigners” (who are expected to adopt Swiss ways, not force the Swiss to exempt them from some of those ways) were weighed against the “religious obligations to God” of Muslims, and the former interests found to outweigh the latter.

What this case shows is that even at the smallest and seemingly inconsequential level, Muslims are challenging the laws and customs of the Infidels among whom they have been allowed to settle. Each little victory, or defeat, will determine whether Muslims will truly integrate into a Western society or, instead, refashion that society to meet Muslim requirements. The handshake has been upheld and, what’s more, a stiff fine now will be imposed on those who continue to refuse to shake hands with a female teacher. This is a heartening sign of non-surrender by the Swiss. But the challenges of the Muslims within Europe to the laws and customs of the indigenes have no logical end and will not stop. And the greater the number of Muslims allowed to settle in Europe, the stronger and more frequent their challenges will be. They are attempting not to integrate, but rather to create, for now, a second, parallel society, and eventually, through sheer force of numbers from both migration and by outbreeding the Infidels, to fashion not a parallel society but one society — now dominated by Muslims.

The Swiss handshaking dispute has received some, but not enough, press attention. Presumably, it’s deemed too inconsequential a matter to bother with. But the Swiss know better. And so should we.

There’s an old Scottish saying that in one variant reads: “Many a little makes a mickle.” That is, the accumulation of many little things leads to one big thing. That’s what’s happening in Europe today. This was one victory for the side of sanity. There will need to be a great many more.