How To Survive Occupied America: “Red Dawn Just Started… And You’re In It” |

Previous Next
How To Survive Occupied America: “Red Dawn Just Started… And You’re In It” |

How To Survive Occupied America: “Red Dawn Just Started… And You’re In It”

Posted on February 10, 2016 by Jeremiah Johnson 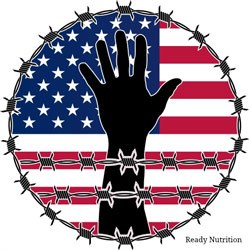 Readers, we briefed you here in the last article in this series on the needs for the two keys to survive an occupied United States: resolve and patience.  You are an intelligent and informed readership who knows about basic fundamentals of survival and then some.  This “venue” or “arena” (the better term) is your country under occupation, either by atyrannical dictatorship (we are in a soft dictatorship at the moment), and/or a foreign army or armies.  Ladies and Gentlemen, fasten your seatbelts.  This info is “hardball” and you will need it; you need all the tools you can acquire.

Now that CISA was passed into law and (by Ted Cruz’s admission on national television) the government is monitoring approximately 100% of all telephone calls, you will see how serious this article is.  First, let’s take care of this disclaimer:

The information presented in this article is for information and entertainment purposes only.  Many of the procedures and items here, if practiced would violate Federal, State, and local laws and statutes.  The owners, editors, and writers of this site are not advocating acting in any way contrary to Federal, State, or local laws or statutes.  Furthermore, ReadyNutrition.com and its staff do not condone, recommend, or approve of violent acts, actions or techniques outlined in this article.  Consult your lawyer for questions pertaining to any of the information in this article and obey all applicable laws and statutes.

It is a Friday evening, and you’re on your way home from work.  Your son and daughter are making dinner for you, and you’re looking forward to the weekend.  You have about three more miles to go to reach your house in a middle-class suburban neighborhood.  Suddenly your Lexus goes dead and starts to coast on the road to a stop, just as you look out your passenger-side window: it appears to be a star, but very near, with a type of “halo” around it up above.  The star flickers out, and all of the street lights, the lights in the homes, the businesses, and cars nearby flicker out.  You realize two things: you’ve been hit by an EMP, and the dinner plans for tonight with the family will probably be postponed indefinitely.

That is how quickly it will happen when it happens.  Self-assessment and situational awareness are your first priorities.  Quickly! Let’s run through it.  Is your“go” bag in your vehicle, with enough food for three days, water for one day, a weapon, ammo, extra clothing, and all of the things we covered in previous articles?  Quickly!  Do you have good hiking boots?  Change into them now: you’re walking, because the Lexus just became a two-ton paperweight.  Commo?  Did you pack a Yaesu hand-held shortwave in Mylar layers and material to shield it from the EMP, or Motorola’s?

Better get moving.  “Red Dawn” just started…in the “open-air” theatre…and you’re in it.  Do you see how critical it is to have all of this stuff done yesterday?  Hope the kids know and rehearsed the drills…hope there is a plan of initial contact, when the event occurs.  It’s dark, with a modicum of light on the horizon…. but you see a tremendous multitude of planes coming in from the west, and what looks to be popcorn dropping from the sky.  Nope: they’re parachutes, because the airborne operation is taking place, just at the turn from dusk to nightfall.

Refer to the previous articles on staying out of FEMA camps as well as the one on the 6 Rules for Survival to refresh on basics.  School’s out, here, and the occupation has begun.

You know the situation in the world.  The Russians and the Chinese do not play softball, and they are on a war footing at all times.  The invasion of Czechoslovakia in 1968 followed after Soviet doctrine (and the military doctrine of then is currently in use by Russia now), as such:

“The strategic offensive has one alternative form.  This is sometimes known as a “Friday evening” offensive…. The operation therefore begins…. with a surprise attack by a group of Fronts against one or more countries…this operation caught the Czechs off guard – profiting by the Friday evening relaxation…after a working week.”

(“Inside the Soviet Army,” by Viktor Suvorov)

Such a Friday attack, as can be seen here, isn’t coincidence: it’s doctrine, and it’s intelligent doctrine.  Such was the venue for the remake of the “Red Dawn” film with the EMP accomplished right after the Friday football game.

What Do You Do?

Now what do you do?  You go home, as quickly as possible.  You will have 24-48 hours of total confusion and chaos.  Hopefully you do not live in an area that is a nuclear target.  Hopefully you have at the ready a good supply of cash, precious metals, food, and supplies in the home and the means to take them somewhere and get out of dodge.

JJ’s scenario preference is the invasion by the foreign power over that of thetotalitarian government.  The reason: a war of the totalitarians versus the people is a war of attrition that only weakens the nation overall and still leaves it ripe for conquest by a foreign power while it is in the throes of weakness.  With the invasion, you will know on sight who the enemies are and that you must engage them.

Engagement: to oppose, combat, harass, or interdict an enemy or opponent.  The mission of the U.S. Army Infantry is simple: to close with the enemy and destroy him.  Canning season is over, and that greenhouse project you planned on finishing in the Spring may have to wait indefinitely.  Congratulations!  You just stepped into the shoes of the Founding Fathers!  Now comes the time to “water the Tree of Liberty,” and Jefferson’s words will have to be kept in mind as you put into practicethe words of Francis Marion, the Swamp Fox, and Rogers’ Rangers.

Are you trained up?  Are you a part of a small group, or are you keeping it in the family?  I hope you studied those infantry tactics and small unit tactics mentioned in other articles.  You need to be fully trained up on first aid, communications, and you should be in possession of a smattering of whatever language the foreign invader speaks.

There are three big differences between a foreign invader and a totalitarian dictatorship.  Firstly, the latter is already here in the U.S. and almost “omnipresent” regarding all 50 states.  Secondly, their supplies are here, and resupply is readily available.  Third, the culture and language is not alien to the dictatorship: they have an “edge” regarding the control and understanding of their citizenry.

Better learn about this stuff while there’s still time.  Here’s a great work that will elucidate many things for you: “Government by Emergency,” by Dr. Gary North, Ph.D., American Bureau of Economic Research, Ft. Worth, TX, 1991.  It has it all: bartering and “black marketing,” evasion, breakdown of controls over the economy, collapse of the banks, depression, and tyranny.

How about when MRAP’s and armored assault vehicles cruise down Main Street into Happyville?  How will you deal with them?  Here’s another great work for you: “The Bridge at Andau,” by James A. Michener, 1957 (no Card Catalog Number or ISBN: sorry!  It’s out of print, but you can find it on Amazon.com if you look it up).  It is the true story of the Hungarian Revolution against the U.S.S.R. of October 23, 1957, and the civilian resistance before the Soviets crushed them.

Guerilla warfare is what this is, whether against a foreign invader or a totalitarian dictatorship.  This will take years to fix with a high price and no guarantee of victory.  Remember those two keys I gave to you last week?  Resolve andpatience.  It is the only way.

Subjects for your personal study and research:

Keep up the study, the prepping, and an eye out for more to come.

You can read part 1 of this series here: How To Survive Occupied America: “To Survive, You Must Possess Two Qualities”

Jeremiah Johnson is the Nom de plume of a retired Green Beret of the United States Army Special Forces (Airborne). Mr. Johnson was a Special Forces Medic, EMT and ACLS-certified, with comprehensive training in wilderness survival, rescue, and patient-extraction. Mr. Johnson is an ardent advocate for preparedness, self-sufficiency, and long-term disaster sustainability for families. He and his wife survived Hurricane Katrina and its aftermath. Cross-trained as a Special Forces Engineer, he is an expert in supply, logistics, transport, and long-term storage of perishable materials, having incorporated many of these techniques plus some unique innovations in his own homestead.

This article was originally published by Jeremiah Johnson at Tess Pennington’sReady Nutrition and is the second part in a series. You can read the first part of the series here: How To Survive Occupied America: “To Survive, You Must Possess Two Qualities”

Tess Pennington is the author of The Prepper’s Blueprint, a comprehensive guide that uses real-life scenarios to help you prepare for any disaster. Because a crisis rarely stops with a triggering event the aftermath can spiral, having the capacity to cripple our normal ways of life. The well-rounded, multi-layered approach outlined in the Blueprinthelps you make sense of a wide array of preparedness concepts through easily digestible action items and supply lists.

Tess is also the author of the highly rated Prepper’s Cookbook, which helps you to create a plan for stocking, organizing and maintaining a proper emergency food supply and includes over 300 recipes for nutritious, delicious, life-saving meals.

Visit her web site at ReadyNutrition.com for an extensive compilation of free information on preparedness, homesteading, and healthy living.