At the heart of the Diyanet Centre complex in Lanham, Maryland is an Ottoman-style mosque with space for 1,400 worshippers. Courtesy Diyanet Centre of America 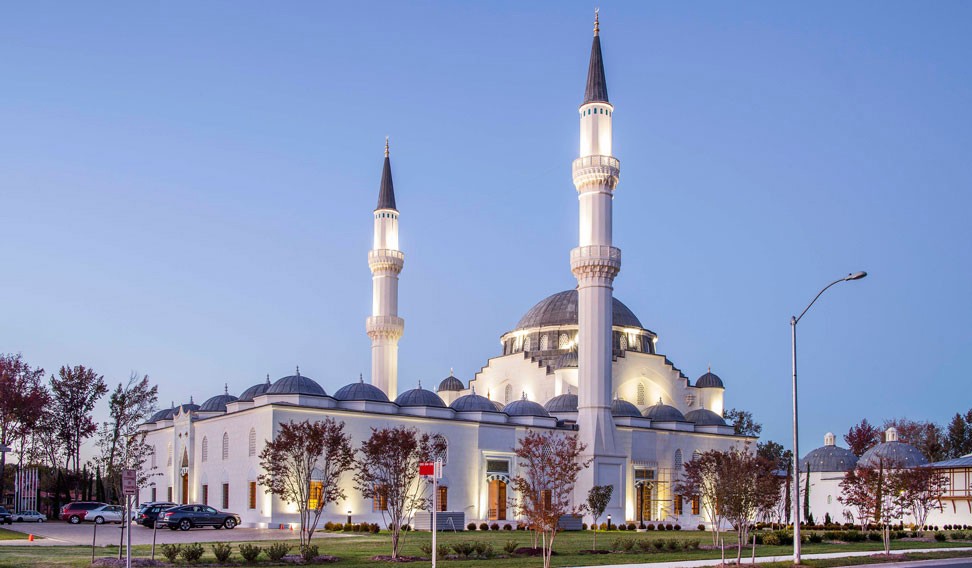 At the heart of the Diyanet Centre complex in Lanham, Maryland is an Ottoman-style mosque with space for 1,400 worshippers.Courtesy Diyanet Centre of America
.

“Everyone said we should think about a community centre that would serve not only Muslims but also non-Muslims, and that would host interfaith and intercultural activities,” Mr Aydilek said.

Mr Erdogan’s government commissioned a group of architects for the project who specialise in recreating Ottoman-era buildings, and construction began in 2012. (More) 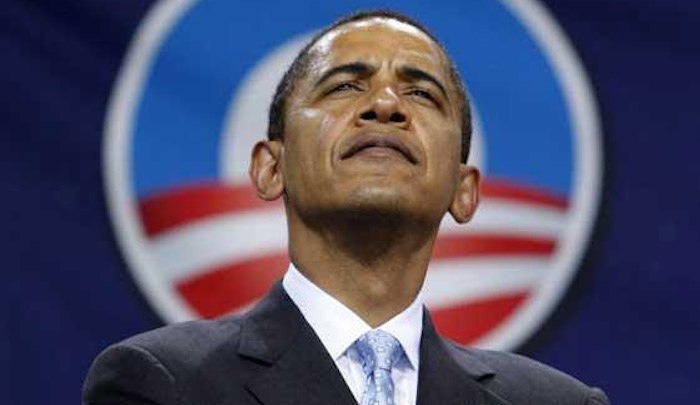 Back in January, at a press conference with David Cameron, Barack Obama delivered himself of some thoughts on how Europe should deal with its Muslim problem. He claimed that the United States had had “more success” than others in “integrating minorities,” and that “our biggest advantage, major, is that our Muslim populations feel themselves to be Americans and there is this incredible process of immigration and assimilation that is part of our tradition.” This was neither the first nor the last time Obama has claimed that “we are doing things right” with integrating Muslims and the Europeans need to learn from us.

Obama’s optimistic certainty is a thing of wonder. For how does he know that “our Muslim populations feel themselves to be Americans”? Does a Pew poll suffice? Do we have reason to believe that Muslims, eager to dampen the suspicions of non-Muslims, and well-versed in taqiyya, might actually answer such a poll by providing the soothing answers they know are desired, and speak not what they feel, but what they think they ought to say? And does Obama think that the definition of “feeling oneself to be an American” is self-evident? Does someone’s merely living within a given geographic area, and attaining the citizenship associated with that geographic area – living in the United States, say, and acquiring American citizenship through naturalization or birth– mean that that someone feels himself “to be an American”? What does it mean to “be an American”? Would it not mean, in the most important and irreducible sense, that you subscribe to the Constitution, that document at the heart of our civil religion, which means to subscribe to a shared set of beliefs? And these beliefs would include the individual’s right to the freedom of speech and to the freedom of religion, and a belief that the legitimacy of any government depends on its reflecting, however imperfectly through elections, the will expressed by the people. Islam, on the other hand, insists on limiting the freedom of speech (if, for example, such speech is held to blaspheme Muhammad or otherwise call aspects of Islam into question) and the freedom of religion (punishing apostates even with death), and ascribing legitimacy to a government or ruler insofar as that government or ruler reflects the will expressed by Allah in the Qur’an, rather than—as in the American system — the will expressed by the people through elections.

Obama has yet to be asked, by some intrepid interviewer, to tell us exactly what his cavalier assertion that “our Muslim populations feel themselves to be Americans” means to him. Nor has he been asked, either, if he has read the Qur’an and familiarized himself with the Hadith, and if he detects any contradictions between those canonical texts and the Constitution of the United States. As far as I know, not once in all of the hundreds of interviews Obama has granted over the past seven years has anyone asked him that most important question: what do you know about Islamic doctrine, and how do you know it? Jeffrey Goldberg practically filled most of the latest issue of The Atlantic with his Obama interview, and there were plenty of questions about terrorism and ISIS and the Middle East, but he did not take the opportunity to ask Obama about his knowledge of Islam. He’s President; therefore he surely must know what he’s talking about; he’s got a small army of wonderful experts, led by the likes of Ben Rhodes and John Brennan, to fill him in by providing bullet-ridden executive summaries for every occasion; Islam and Obama go all the way back to the dreams of his father, and the melodious sound of the muezzin’s wail in Indonesia, so he must have a grasp of the subject; don’t dare to cross-question him; when it comes to Islam, it’s ipse-dixit all the way.

Obama mentions the greater “success” in integrating Muslims in this country. Is he not referring to economic success? Aren’t the Muslim immigrants to the United States, in general, better educated and better off to begin with than those Muslims who manage to settle in Europe? It’s a lot harder, and much more expensive, to find one’s way from North Africa and the Middle East to the United States, than to be smuggled across the Mediterranean by boat into Europe. But economic success is not the same thing as ideological integration. There have been more than a few cases of very successful Muslims, seemingly completely assimilated, who “reverted” to the real Islam. Some may recall Mike Hawash, an Intel engineer earning $300,000 a year, who was as “assimilated” as all get out. And then one fine day he started to become more devout, grew a beard, and ended up trying to get to Afghanistan to give aid and comfort to the Taliban. And how successful is this supposed “integration” when more than half of the Muslim terrorist attacks in this country since 9/11/2001 have been committed by people born and raised in this country, such as Syed Rizwan Farook and Nidal Hasan?

Instead of lecturing the Europeans, one would wish for a President who is sympathetic to their plight, and keenly aware that were Europe to become irreversibly Islamized (here and there there are signs of a growing willingness to fight back – Belgian leaders sound different today from the way they sounded a month ago — but is it enough?), America could not go it, culturally and spiritually, alone. And Europeans, now possibly coming to their senses about the terrible situation they have brought upon themselves, do not need lectures from Obama on what they are doing wrong, and how they must do more to make their societies even more welcoming to Muslims.

Obama’s certainty about Muslim integration in this country mirrors his certainty about policies toward Muslims abroad. He had no doubts about what needed to be done in Syria, an extraordinarily complicated country; in 2011 he declared that “Assad would have to go,” and he repeated that mantra right up to the end of 2015. He declared that there were “red lines” that, if crossed by the Assad regime, would lead to automatic American intervention; those lines were continually crossed, and nothing happened. Assad is still in Damascus, and by now there are many who agree that his remaining in power offers the best hope for containing ISIS and protecting minorities, especially Christians. But the complexity of Syria’s situation was always beyond Obama’s certainties.

In Egypt, Obama was adamant that as part of the “Arab Spring” Mubarak should resign, and eventually he did, making way for Morsi and the Muslim Brotherhood. Obama was certain that our ally Mubarak was a superannuated despot, who deserved to be abandoned, while Morsi brought with him the possibility of a brave new democracy to Egypt, and Obama has never been one to worry overmuch about the Ikhwan. And when General Al-Sisi managed to replace Morsi, and go after the Brotherhood, it was despite, not in concert with, the disapproving Obama administration, that never seemed to quite understand what the Muslim Brotherhood was all about.

In Libya, Obama was also certain of how things would turn out — that once Qaddafi had been removed, Libya would emerge as a unified and democratic polity. Never mind that Libya had never been a democracy, and that the country itself was soon to dissolve, fissiparousness prevailing as power devolved to a myriad of militias, some defined geographically (Zintan, Misrata, Benghazi), others ideologically, including the forces of Ansar al-Sharia and, most recently, of the Islamic State, now dug in in Sirte. (Apparently no one in the Middle East has gotten Obama’s repeated message that the Islamic State is finished.)

Obama’s policy on Muslim matters — at home and abroad — has been a blend of certainty and sanctimony. One hopes that his replacement will at least forego those lectures that, with unhappy regularity, Obama keeps inflicting on our European allies. And possibly, just possibly, that next president will become a sudden scholar of Islam, and read a relevant book or two that Obama overlooked. You know the ones I have in mind.