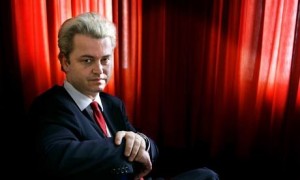 Dutch parliamentarian Geert Wilders has released in 2012 his autobiographical account of his internationally known condemnation of, and personal conflicts with, Islam, with a forward available online by his fellow comrade in letters vis-à-vis Islam, conservative columnist Mark Steyn. Marked for Death: Islam’s War against the West and Me recounts how an individual Dutchman became aware of an aggressive and authoritarian agenda in Islam as a faith-based political ideology. Through personal travels to the Middle East and the example of Muslim migrants who sought not to assimilate to Holland’s world-renowned tolerant culture, but rather despised and sought to dominate it, Wilders recognized the incompatibility of Islam’s canonical core with a free Western civilization. Wilders in turn personally experienced this incompatibility as his continuing condemnation of Islam brought him not the intellectual interchange due a debater in public forums, but rather personal and legal endangerment. Yet Wilders persevered and prevailed, thereby giving an example of how the free world can once again overcome a totalitarian threat.

As Steyn writes in his forward, the Wilders “who emerges in the following pages is not the grunting thug of media demonology but a well-read, well-traveled, elegant, and perceptive analyst.” Wilders traveled and worked in Israel following his 1981 high school graduation, beginning a lifelong passion for this country that has led to at least annual visits throughout the years, over 50 trips in all. During this initial stay in Israel, Wilders also made his first visit to a majoritarian-Muslim country, Egypt.

Wilders was “overwhelmed by the kindness, friendliness, and helpfulness of its people.” Yet an “overwhelming sense of fear” under the dictatorship of Hosni Mubarak also possessed these people. Additionally, their capital “Cairo was poor and incredibly dirty,” making Wilders “amazed that such a place could be a neighbor of Israel, which was so clean.” One “big mistake” by Wilders here was buying a glass of water from a public water collector, leading to several days of severe diarrhea spent lying on a hostel floor for two dollars a day “in a crowded, stinking room.”

Wilders’ travels made him notice critical attitudinal differences between Muslim Arabs and Jews. Understandably in the context of Israel’s fight for survival amongst surrounding Arabs, “Israelis often had negative political opinions about Arabs.” Yet even Israelis who had lost loved ones to Arab terrorism “did not feel offended by the Arabs’ mere existence.” In Egypt, though, the “mention of Israel inevitably produced an outburst of vitriolic hatred.” This “wrath was not confined to Israeli soldiers or politicians or to Israelis who had done them personal harm,” but rather “was hatred against all Jews, even children.” It “was hard to find an Arab who spoke about Jews with anything but unconcealed contempt.”

Wilders’ experience with Islam at home in Holland has been no less negative. In his chapter “Conquest,” Wilders writes that mass Muslim migration is turning many Dutch neighborhoods into “cities of the prophet.” This is in emulation of Islam’s prophet Muhammad and his original followers who sought refuge from Mecca in the largely Jewish settlement of Yathrib in the Arabian Peninsula in 622. “By foolishly welcoming Muhammad and Meccan followers into their town,” Wilders writes, “the Yathribians guaranteed their own extinction and the transformation of their land into Medina, the ‘City of the Prophet’, which it has remained ever since.” Wilders’ writes elsewhere that Muhammad’s emigration or hijra from Mecca to Medina, the orientation point of the Islamic calendar, is an “intrinsic part of Islamic culture” such that for some Muslim immigrants “Islam is meant to dominate, not to assimilate” in the immigrants’ new home. Thus, with the open encouragement of Muslim leaders like Turkish prime minister Recep Tayyip Erdoğan, “immigration is Islam’s Trojan horse, paving the way for jihad” in another Islamic attempt “to conquer Europe.”

The result is a “slippery slope toward full Islamization” of Europe under “creeping Shaira” as a “non-violent infiltration of our institutions, a stealth jihad.” Among many examples cited by Wilders, municipal authorities in the Dutch cities of Amsterdam and Rotterdam as well as the nearby Belgian port of Antwerp have begun registering polygamous marriages. Pools and beaches in diverse European countries such as Finland and Italy have also accommodated Muslim demands for strict sexual segregation with separate bathing areas. In Britain, non-Muslim women have even had to wear the so-called burkiniadaptation of Islamic female body covering.

Likewise, Europe faces the depredations of many Muslims who see the continent not as a new home to settle, but rather as a foreign society to be subjugated and plundered in accord with Islam’s history of raiding. Holland, for instance, has 40 areas known as “Vogelaar neighborhoods” after a list published in 2007 by the Dutch Minister of Integration and Housing, Ella Vogelaar. Here large Muslim communities exhibit high crime rates, particularly with respect to non-Muslim victims, vigilante enforcement of sharia norms such as those involving the “modesty” of females, and a susceptibility to riots provoked by any incident à la Rodney King. Even state authorities such as the police only enter these areas with the greatest precaution. France similarly has since 1996 751 internationally known zones urbaines sensibles (sensitive urban areas or ZUS), the scene of extensive rioting in 2005 with over 10,000 destroyed cars. Wilders describes the same phenomenon of non-Muslim “no-go” areas in Belgium, Germany, and the United Kingdom.

Muslim hostility extends beyond individual criminal acts to state social services. Some imams in Germany, the Netherlands, and the United Kingdom have told their congregations to avoid work and paying taxes in order to drain their host societies through welfare payments. Similarly, a Pakistani immigrant told a Norwegian newspaper that he and his boss avoided paying taxes.

Wilders’ ongoing exposure to Islam has prompted his extensive study of the same. Wilders is a “fervent reader of the Koran,” often compared by Wilders to Adolf Hitler’s Mein Kampf, banned in many countries like Wilders’ Holland. Reading the Koran for the first time, Wilders expected “to find injunctions to ‘love thy neighbor’…similar to those in the Bible, but instead…found the spite of a god who hates.”

Drawing upon the analysis of many other scholars of Islam, Wilders discerns that “Islam is primarily a political ideology, not a religion.” In particular, unlike “authentic religions” Islam “does not teach the golden rule” but rather “institutionalizes inequality.” Wilders has come to the conclusion that while “many moderate Muslims” exist, the “political ideology of Islam is not moderate–it is a totalitarian cult with global ambitions.”

Like others, Wilders has determined that oft-criticized “inhuman aspects form the core of Islam,” thereby marginalizing any attempt to formulate a benign understanding of Islam as esoteric and largely unviable. Therefore “there is no such thing as ‘Islam with a human face,’ just as there was no real ‘socialism with a human face’ or ‘national-socialism with a human face.’” “People who reject Islam’s violent, intolerant, and misogynistic commandments may be moderates,” Wilders analyzes, “but they are not practicing ‘moderate Islam’–they are not practicing Islam at all.” Having traveled to Afghanistan, Egypt, Indonesia, Iran, Iraq, Syria, Tunisia, and Turkey, Wilders recognizes the great “potential” of Muslim individuals. Yet Wilders concludes, “Islam is the problem–and we should not be afraid to say so,” thereby rejecting any attempt to “sugarcoat Islam…out of a misguided fear of offending its adherents.”

Wilders has paid a price for his condemnation of Islam. Since November 4, 2004, two days after the Amsterdam murder of filmmaker Theo van Gogh by a Muslim, Wilders has lived under constant police protection “like a prisoner” due to similar death threats. “Providing permanent protection for critics of Islam,” Wilders observes, “is one of the many costs a society has to pay once it allows Islam inside its borders.” Wilders also endured a prosecution in Holland for his anti-Islam statements before obtaining a critical legal victory for free speech on June 23, 2011.

Yet Wilders has ultimately obtained results. Following the strong showing (15.5% of the vote) of Wilders’ Party for Freedom (PVV) in the June 9, 2010, Dutch general elections, Wilders was able to demand in return for PVV support for a minority government changes in Dutch immigration policy. Dutch policies now restrict the extent of immigrant family unification to spouses and young children, emphasize integration into Dutch life as opposed to cultural relativism, and expel residents convicted of crime. The Dutch government, meanwhile, denounced the 57-member state (including Palestine)Organization of Islamic Cooperation (OIC) for its calls to suppress Wilders following his legal victory. The Dutch government has also strengthened its support for Israel, cutting support for “humanitarian organizations” supporting anti-Israel sanctions and questioning Israel’s right to exist. Along with Israel and the United States, Holland also boycotted the shamelessly anti-Israel United Nations anti-racism conference (Durban III) in September 2011. Wilders’ defiant example shows that free nations need hardly submit to Islamic threats often seen as insurmountable. 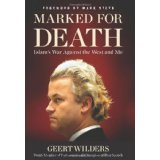 Marked for Death: Islam’s War Against the West and Me by Geert Wilders