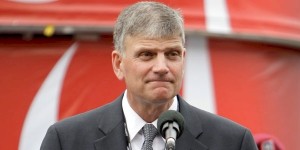 Evangelist and political activist Franklin Graham posted a story from USA Today, in which a former Muslim argues that no one should be surprised by the ISIS Brussels attacks or other recent ones, because it is completely consistent with Islam’s sacred texts.

“Why does Islam hate so much?,” Graham asks in a Thursday Facebook post. “It’s because the Quran teaches its followers to hate. Jews, Christians and others are to be subdued so that Islam may ‘prevail over all religions.’”

“It’s all in the final chapter of the Quran—’Kill or be killed in battle, and paradise awaits,’” he adds.

The evangelist’s included an article by Nabeel Qureshi, a former Muslim, who grew up in the United States, and is now a speaker with Ravi Zacharias International Ministries. In his piece entitled, The Quran’s Deadly Role in Inspiring Belgian Slaughter, the author contends “ISIL’s primary recruiting technique is not social or financial but theological.”

Qureshi points to the last chapter chronologically from the Quran:

Surah 9 is a command to disavow all treaties with polytheists and to subjugate Jews and Christians (9.29) so that Islam may “prevail over all religions“ (9.33). It is fair to wonder whether any non-Muslims in the world are immune from being attacked, subdued or assimilated under this command.

Muslims must fight, according to this final chapter of the Quran, and if they do not, then their faith is called into question and they are counted among the hypocrites (9.44-45). If they do fight, they are promised one of two rewards, either spoils of war or heaven through martyrdom. Allah has made a bargain with the mujahid who obeys: Kill or be killed in battle, and paradise awaits (9.111).

Qureshi’s conclusion is: “Muslims must depart from the literal reading of the Quran in order to create a jihad-free Islamic world,” adding, “Any solution, political or otherwise, that overlooks the spiritual and religious roots of jihad can have only limited effectiveness.”

Earlier this week, Graham reaffirmed his call for a temporary ban on Muslims being permitted to immigrate to the United States. He wrote on the day of the attacks in Belgium:

Islamists have told us we will see more of these attacks and we have to take their threats seriously. I have long supported a temporary halt to immigration, especially for those coming from Muslim countries, until we have a vetting program that works and we can know who these people are. If we can’t get an accurate background check, they don’t come in. It’s as simple as that.

What happened in Brussels, in Paris, and in New York on 9/11 will happen again inside our borders unless something changes because the current administration has lowered the standards and our President even refuses to acknowledge this as Islamic terrorism. Our country is in trouble─we have a void in leadership.