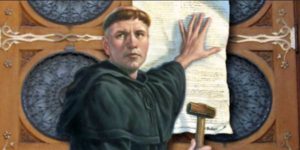 With the 500th anniversary approaching of the day Martin Luther nailed his 95 theses to the door of the Castle Church in Wittenberg, setting off the Reformation, some evangelicals are strongly suggesting it’s time for another.

The calls come from a wide variety of authors, scholars and activists – many of them noting the shortcomings of what turned into a violent clash between Catholics and Protestants, the spread of anti-Semitism and much disunity within the church.

RELATED COLUMN: The dark side of the Reformation

Peter Hammond of Cape Town, South Africa, has formed the Reformation Society and even drafted his own theses.

The society “encourages further study and discussion on the Reformation doctrines and actions needed for Reformation today.” This initiative is part of the Coalition on Revival’s five-year Plan to Reform our Churches, culminating in a Reformation 500 event at Wittenberg Oct. 31, 2017, to mark the 500th anniversary.

“Inspired by and based upon Dr. Martin Luther’s historic 95 Theses published 31 October 1517, which launched the Protestant Reformation, we offer these 95 Theses for Reformation Today to stimulate prayerful reflection, study of God’s Word, discussion in the Church and positive action for Reformation,” says Hammond.

Joseph Farah’s newest book, “The Restitution of All Things,” expounds on what few authors dare to approach, the coming kingdom of God. Available at the WND Superstore.

Among them are the following:

“It’s been 500 years!” Noe exclaims. “Isn’t it about time we finish the job? But finishing was beyond Luther’s grasp.”

Noe says Luther only addressed one of the two great works of the Messiah – that of salvation. Noe suggests there needs to be more emphasis on a nearly forgotten aspect of the gospel.

“The Messiah’s other great work, the kingdom of God – Jesus Christ’s central teaching – wasn’t even touched,” he says. “And today Christ’s kingdom is embedded in a maze of conflict and confusion within his Church. Consequently, it’s rarely mentioned. It’s even been eliminated from the gospel. And we modern-day Christians are paying a huge price for this self-inflicted reductionism. For example, Christianity is now accused of being ‘tamed’ and non-Christians told that they have nothing to fear from we Christians.”

The Kingdom of God, which Jesus emphasized in all four gospels, is what Joseph Farah, founder of WND.com and author of the new book, “The Restitution of All Things, Israel, Christians and the End of the Age,” agrees is the missing dynamic of the church which was on the minds of all believers in the first century – a literal 1,000-year time of peace, prosperity, righteousness and justice on the Earth ruled and reigned over by the return of the Messiah.

“The very last question Jesus’ apostles and disciples asked Him about before He ascended into heaven after spending 40 days with them in His resurrected state was: ‘Is this the time you will restore the Kingdom of Israel?’” Farah says. “That question preoccupied them. After all, it’s what all the prophets spoke about, as Peter said in Acts 3. Why don’t we speak about it today – or even think about it? We have replaced the Word of God with man’s own religious traditions, much as did the Pharisees and other religious leaders of Jesus’ time on earth.”

Farah agrees the Reformation did not go nearly far enough in getting back to solo scriptura.

Another new book by author Joe Kovacs, “Shocked by the Bible 2,” offers a Kingdom-centric look at the scriptures regarding mankind’s destiny on a redeemed earth.

Perhaps the most ambitious project to stimulate awareness of the shortcomings of the Reformation is“Let the Lion Roar,” a movie and book by Derek and Vanessa Frank.

The movie takes viewers back to 16th-century Europe after the writings of Luther and John Calvin ushered in the Reformation. It features actors Kevin Sorbo, Eric Roberts, Stephen Baldwin and John Schneider in re-enactments of the period that reveal a dark anti-Semitism that grew within the new Protestant tradition.

Farah says, despite all this activity, debate and discussion of the Reformation as it approaches its 500th anniversary, he’s surprised that this monumental historical and spiritual landmark has not yet captured the imagination of the church in America – the place where the Protestant Reformation made its biggest impact.

“With only a few weeks before the 500th anniversary, I’m a little shocked that there hasn’t been more written and talked about by now,” he says. “It’s sneaking up on us and I wonder if the opportunity to debate its achievements and shortcomings will be lost on this auspicious occasion.”

Learn stunning Bible scriptures that never seem to get addressed! See the eye-opening truth in “Shocked by the Bible 2,” with autographed copies available only from WND!
GodPost2017-10-09T13:51:43-05:00