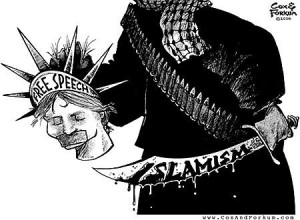 Criminalizing free speech is about to happen. Well, only if it is construed as anti-Muslim, or anti-Islam. The Department of  Justice is moving swiftly by implementing a new enforcement effort that will follow up any investigations with possible prosecutions for what they say has been backlash to Muslims since 9/11, particularly Muslim Students in public schools.

Department of Justice Civil Rights division head Vanita Gupta states the new crackdown  “Combating Religious Discrimination,” will focus on fighting the harassment and acts of violence towards Muslim children, or children “perceived” to be Muslim while attending school.

Gupta further states “Our schools must remain the places where our children feel safe and supported. The places where they confront differences by building bridges of understanding. And the places where they learn that America guarantees freedom, justice and opportunity for all people — regardless of what you look like, where you come from or which religion you observe.”   Read entire speech here 🙁 https://www.justice.gov/opa/speech/head-civil-rights-division-vanita-gupta-delivers-remarks-interagency-roundtable-religious

No, school is where children learn, not “build bridges”, unless you are a Muslim whose religious duty is to perform dawa. (Proselytizing Islam) This “effort” isn’t about protecting children of all faiths, this is about forcing Islam to be taught in schools, which has suffered set backs due to parents across the country demanding Islam be taught the same way other religions, specifically Christianity are taught.

Not only is Islam disproportionately represented in textbooks, it is inappropriately instructed, including children repeating the Islamic profession of faith, the Shahada. There is no historical value of children narrating the prayer that is recited when one converts to Islam. Most parents have stated they do not reject students from learning about Islam, but it must be historically accurate, which it is not.

The Department of Justice is way over the line. If Muslims want their children to be immersed in their religion and culture, send them to an Islamic school. But that isn’t the issue at all. The truth is, Islamists want to end free speech. It is Sharia law in action.

In 2008, Hillary Clinton along with the Organization of Islamic Cooperation (OIC) drafted what they called a “Defamation of Religion Law”, (Un resolution 16/18)  known in countries such as Pakistan as a blasphemy law. Committing blasphemy is punishable by death.

While it may not be as drastic in the West, the mere thought the United States Department of Justice is enacting measures that will lead to possible prosecution for “Islamophobia” is perilous. Enjoy your freedoms, they are coming to an end quickly.

The focus should not be on educating students about jihad terror and Islamic supremacism, but on teaching them that Muslims are victims of discrimination and harassment who warrant special consideration. The problem with that is that Islamic supremacist advocacy groups such as Hamas-linked CAIR routinely smear legitimate counter-terror efforts as “hateful” and “bigoted,” and work to get them shut down on that basis. This kind of “urging” from the Feds only feeds that mindset and hinders counter-terror operations.

Read the Jihad Watch piece and be forewarned that the terrorist-named CAIR continues to try and get in to public schools all across the U.S. to intimidate your children and indoctrinate them with Islamic propaganda.