A Casualty of War, a Promise Made, and Kept… –

Previous Next
A Casualty of War, a Promise Made, and Kept… –

A Casualty of War, a Promise Made, and Kept…

A bunch of his buddies knew of me…they called me a “murderer.”

A casualty of war is kindness, not because the soul does not want to comply, but because some heartbreaking rules cannot be broken. 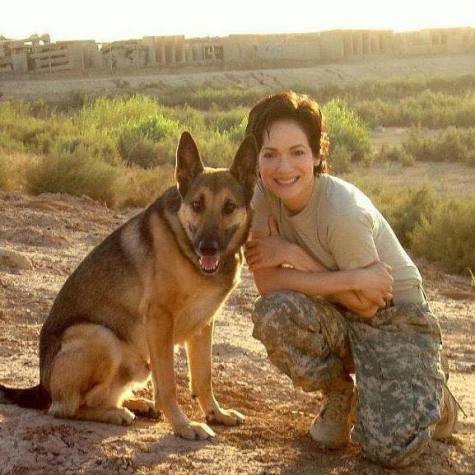 His buddies did not understand, that for the safety of everyone on base, she had no choice but to follow the orders given. She was not a monster, nor was she being cruel, she wasprotecting him and all of his buddies. The Army Base at Al-Asad, Iraq had a firm ‘no dogs policy’, rabies was an epidemic in the country. The only dogs permitted were the trained, service K9s. He and his buddies never saw her private pain. She felt too much shame to meet his tear-filled, blue eyes.

“The soldier on the other side of the examination table sang a lullaby to the skinny, shivering puppy he cradled in his arms. She could only see the soldier’s eyes beneath his dirty helmet. They were filled with tears. The soldier explained that he found the dog in the desert, and it reminded him of one he had back home in Kentucky. He had brought the pup back to the base in hopes that it could be nursed back to health.” (excerpt from:Today’s Woman, October 2015 issue)

Sergeant Jessica Montgomery had no choice but to euthanize the puppy. The soldier thanked her, gently wrapped the small body in a towel, and went to bury it. She never got his name, she never had the chance to even fully see his face, however, that day in2010 changed her life. HE changed her life. To this day, she wakes from dreams of that fateful day, his sweet, Kentucky accent crooning softly to the little creature. The heartbreak and anger of not being able to do a damn thing to save THAT puppy. A puppy that would have brought comfort and joy to a soldier, in a combat situation, far from anything that even remotely resembled home.

Jessica told me, “They [his buddies] were outside their building smoking, which was right next to mine, the next morning. They called me a “murderer”. [His unit] used Mraps, Rhinos and Humvees in a convoy every day to clear routes of IEDs.” 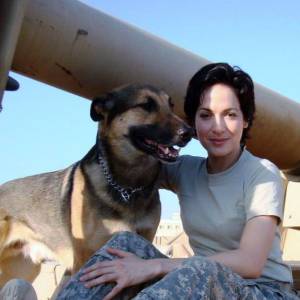 In an effort to help her find this Army soldier, I asked Jessica what she remembered about him: “…his Kentucky accent. I met him once. He was in full battle rattle. Blonde, I think, but he was still wearing a helmet. I saw no tattoos or scars. Blue eyes. I’m sorry. I was too ashamed to look at him…I never saw him again.”

What was so remarkable about this chance encounter between a soldier and an Army Veterinary Nurse? How did it change her life? That night, Jessica made a promiseto herself, that she was going to do whatever it took to help save the innocent lives of animals. She was inspired by the soldier with blue eyes, softly singing to a puppy. Fate sometimes has a way of working things out, Jessica has kept that promise, in of all places, Louisville, Kentucky. She is the Executive Director of the Louisville Metro Animal Services.

“We are not the bad guys. Euthanasia of an animal is a last resort on my watch. There are so many other options and avenues~rescues, transport to other shelters for adoption, foster programs~that allow for an animal to leave this shelter alive.” (excerpt: Today’s Woman)

“I asked Jessica if she chose Kentucky because of the soldier, “I got interviewed for KY by phone. Then was told they weren’t hiring after all. So I interview for CA. Liked them, they liked me. Flew to CA. Was signing a contract when I put the pen down for some reason. The phone rang. It was KY. I said thanks, but no thanks. The day went on and I had a sinking feeling. I had a dream of him, again. I hadn’t dreamt of him in years. I called KY the next day and here I am. I made a promise in Iraq and it all came flooding back in my dream. Easy choice then…”

Then she asked me the $64,000 questions: “Is this even possible? Finding him? Or am I just kidding myself?”

My answer was a resounding, “YES, Jessica, it IS possible, but are you prepared to face finding out he died over there?”

The very idea of this woman getting her heart broken sickened me, but I had to ask the question, she replied, “Yeah. But I want to visit his grave then. And tell him anyway, about the person I have become. Because of him.”

I realize that I have not given YOU, the public, much information to work with, but it is ALL we have. I am asking all of you, if you or a buddy was stationed in Al-Asad, Iraq in the fall of 2010 and worked in a convoy similar to the one described by Jessica, to please contact me at the email below. If you were one of this Army soldier’s buddies who called an Army vet nurse a “murderer” because she put down that puppy, please contact me at the email below.

Both of them served this country with honor and heartbreak. Two lives could be dramatically changed just by sending a simple email to: alasadiraq2010@yahoo.com

Please share this to every veterans’ group, military publication, Facebook page/group, hell, I don’t care, send it to Dear Abby and Miss Manners!! Just share this so the missing piece in Jessica’s life, that was lost over there, is found.

Brandi is a white, single, heterosexual, conservative, Christian woman. She is considered to be an “equal opportunity offender” and passionate patriot, who wishes to speak out on behalf of her country and fellow conservative Christians.