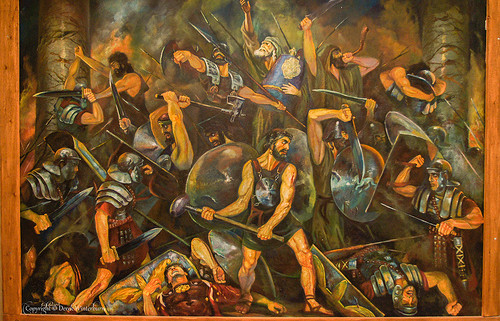 It is written in the KJV- Ezekiel: 38, that “Sheba, Dedan, the merchants of Tarshish” – the Western powers,- which could equal England and it’s offspring America (Lion and young lion), – will “be upset”, – meaning America possibly debating it in Congress like we did with Hitler, and the United Nations. Matthew Henry in his Commentary http://www.biblestudytools.com/commentaries/matthew-henry-complete/  thinks Sheba and the merchants of Tarshish refer to the Arabians and Edomites, and this had already occurred. The result may mean there never is going to be a final literal battle over literal Israel. This would lead one to the conclusion there is going to be final battle over spiritual Israel, which would include both Gentiles and Jews who are followers of Jesus Christ, found around the entire world.

Christian world must unite against anti-Semitism

Opinion: ‘If Israel Goes Down, We All Go Down‘
Scroll to top