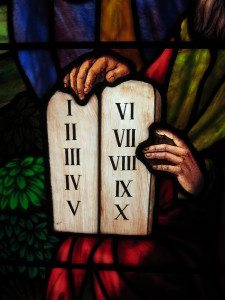 MANY PEOPLE TODAY CAN’T EVEN LIST THE TEN COMMANDMENTS. WE MUST TEACH YOUNGER BELIEVERS THAT GOD’S MORAL LAWS ARE AS IMPORTANT TODAY AS THEY WERE WHEN GOD GAVE THEM TO MOSES.

A few months ago I read an article in a national newspaper that surprised me. A television talk show commentator had interviewed a number of people in nightclubs and other places on the street. He asked each the same question, “Can you name one of the Ten Commandments?”

I was deeply grieved to learn that no one he interviewed could quote any of God’s laws. The ones who tried were way off base.

What has happened to us as a nation? We have only to listen to the news to realize that we are ignoring the societal boundaries God set up for us to follow. No wonder we suffer from lawlessness!

The most horrific example we have had in recent times of the consequences of not following the Ten Commandments occurred on April 20, 1999, in Littleton, Colorado. The sixth commandment, “You shall not murder” (Deut. 5:17, NKJV), was blatantly broken by two high school boys who went on a killing spree at their high school. At the end of the day one teacher and 14 students were killed, and at least 23 were injured.

The year before last I began to wonder if the young people of this nation understand the meaning of the Ten Commandments. Could they explain them to me? I wondered. How many have broken one or more of them?

My questions resulted in my preaching a message on the Ten Commandments at a youth congress. I told the young people who attended, “These are laws–God’s laws–not mere suggestions.” At the end of the sermon I extended an invitation to those who had broken at least one of the commandments.

What happened absolutely shocked me. The front was full of young men and women on their knees weeping and repenting before God for breaking His laws!

I realized then that we have lost our way as a society because the plumb line that is a standard against relativism has been taken out of our nation’s belief system. I had identified this problem before–as many of you undoubtedly have–but I hadn’t comprehended how deep the problem had become among so-called “Christian” kids.

HOLD UP THE PLUMB LINE As you read and study each of the Ten Commandments with me, I want you to think about what you see, hear and listen to each day. If it does not line up with God’s Word, it has a deeply polluting effect on you whether you want it to or not.

I often tell people that we need to not only read God’s Word but also read God’s world in light of His Word. We need to hold up the plumb line of His law in our society once again and use it to evaluate all that comes into our eye and ear gates.

Most of you know that God called Moses up to the top of Mount Horeb to give him the Ten Commandments. There, the finger of God etched His laws on tablets of stone–not wood or parchment–so that they could be passed down from generation to generation. He wanted His people to abide by these laws through the ages.

But why? The Israelites had been living in bondage in Egypt under an idolatrous system that was full of sinful practices. God wanted them to be a kingdom of priests and a holy nation (see Ex. 19:6). The laws were designed to help them become the people God wanted them to be.

First Commandment. You shall have no other gods before Me (Ex. 20:3).

In this commandment God states that He is the one and only God. Everything belongs to Him, as Psalm 24:1 says: “The earth is the Lord’s, and all its fullness, the world and those who dwell therein.” This is a statement of ownership that demands our submission to His law. Anyone who worships another god before Him is guilty of the sin of idolatry.

Here God elaborates on the First Commandment by describing what He considers idolatry–the making of any image for the sake of worship. In his book, Hard Core Idolatry (Wagner Institute for Practical Ministry), C. Peter Wagner says he believes these commandments are listed first because idolatry is the sin God hates most.

People in nations all over the world worship other gods. Many of these are female goddesses described in Revelation 17:1-2. The Bible says that they are the great harlot who sits on many waters with whom the kings of the earth commit fornication.

Third Commandment. You shall not take the name of the Lord your God in vain, for the Lord will not hold him guiltless who takes His name in vain (v. 7).

This is one commandment we see broken regularly on television. People use God’s name as if it had no meaning.

Have you ever wondered why people do not curse with the name of Buddha or some other false god? It’s because Satan isn’t interested in damaging the reputation of a false god. He wants to throw curses at the living God.

Many times when I have rebuked young people for using the Lord’s name as a curse word they have said, “But Cindy, I don’t mean anything by it.” That is exactly the point. God’s name is so holy that we never want to use it lightly.

This is the commandment that Christians most neglect. Years ago it was so carefully observed that many fell into legalism. Jesus warned about this when He said that the Sabbath was made for man, not man for the Sabbath.

However, the pendulum has swung so far the other way now that we don’t rest at all. God modeled resting for us when He rested on the seventh day after creating the world–even though He didn’t need to.

Fifth Commandment. Honor your father and your mother, that your days may be long upon the land which the Lord your God is giving you (v. 12).

Honor is something we seem to have lost an understanding of through the decades. Rather than respecting the elderly, we call them names such as “old man” and “old lady” in a derogatory tone. We need to restore honor to our nation.

Sixth Commandment. You shall not murder (v. 13).

This Scripture says it is wrong to take another’s life. We have watched so many murders on television and in movies that we are desensitized to death. It doesn’t seem real. For this reason, I strongly object to movies that are extremely violent.

Often those in the military struggle with this law. But the verse doesn’t say you shall not kill; it says you shall not murder. The Bible is full of references to armies of men who were called by God to defend their nations, and they certainly had to kill people in order to obey His commands.

Seventh Commandment. You shall not commit adultery (v .14).

This commandment clearly forbids married persons from having sexual relations outside marriage. But it also implicitly warns against sexual impurity of any kind.

This goes against the grain for many believers. Much of the church has been so polluted by media that they watch movies that would have been considered pornographic in the 1940s. We compare ourselves with unbelievers and think we can watch R-rated movies because the world watches X-rated movies.

Jesus explained the Seventh Commandment in depth when he said that purity has to extend to the very thoughts we think (see Matt. 5:27-28). Otherwise, we commit spiritual adultery in our minds by entertaining lustful thoughts.

Eighth Commandment. You shall not steal (v. 15).

This commandment means that we are not to take what doesn’t belong to us. Inherent in it is the mandate to live a life full of integrity. Many Christians would deny that they steal, yet they take supplies from their workplaces, misuse telephone privileges by making personal calls from the office and so on.

Ninth Commandment. You shall not bear false witness against your neighbor (v. 16).

This law commands us not to gossip, slander or say untrue and injurious things about a person.

Tenth Commandment. You shall not covet (v. 17).

Coveting can be a very subtle sin. It may start with a general discontentment with what we own or a concern that our relationship with our spouse or another person isn’t as good as someone else’s. Finally, we reach a state in which we are completely dissatisfied and so consumed with wanting what another person has that we become obsessed and lose our focus and joy.

LEADING THE WAY As adults, we must be responsible for leading the way–not only by keeping the Ten Commandments ourselves, but also by teaching them to our children and expecting them to follow suit. It is essential for us to give them a standard by which to measure their thoughts and actions, a yardstick to help them determine whether or not they have met the mark. We do not want them to become modern-day Pharisees, legalistic to a fault and ignoring the spirit of the law; however, we also do not want them to be completely lawless.

The important thing is to teach them that although we now live under the dispensation of grace, being no longer bound by the law (see Rom. 6:14), we are responsible for living holy lives based on the commandments God has given us (see v. 15). Jesus told us: “Do not think that I came to destroy the Law or the Prophets. I did not come to destroy but to fulfill. For assuredly, I say to you, till heaven and earth pass away, one jot or one tittle will by no means pass from the law till all is fulfilled” (Matt. 5:17-18). He went on to tell us His expectations of us:

Jesus clearly taught us to follow the Ten Commandments; but He went beyond expounding on the letter of the law to explaining the spirit of it (see vv. 21-48). This is what we must do in “laying down the law” for our children so that their righteousness will “exceed that of the scribes and Pharisees.”

It is not enough for them to learn simply not to break the law as it is written (for example, “You shall not murder”); they must understand what God really meant when He wrote it (“You shall not even be angry with your brother”). This is the only way to ensure that their training goes beyond controlling outward behavior to modifying the attitudes of the heart.

Cindy Jacobs is co-founder with her husband, Mike, of Generals of Intercession, an organization that helps build prayer ministries throughout the world. She is also the author of several books, including Possessing the Gates of the Enemy and Women of Destiny.

The Coming Collision Between Shaking and Glory

24 Reasons Why Hell Is Real
Scroll to top