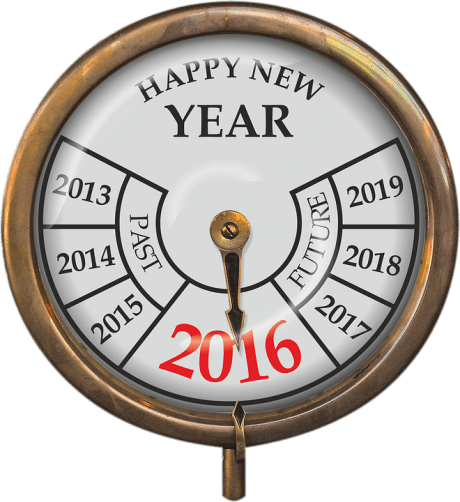 A lot of people were expecting some really big things to happen in 2015, and most of them did not happen.  But what did happen?  It is my contention that a global financial crisis began during the second half of 2015, and it threatens to greatly accelerate as we enter2016.  During the last six months of the year that just ended, financial markets all over the planet crashed, trillions of dollars of global wealth was wiped out, and some of the largest economies in the world plunged into recession.  Here in the United States, 2015 was the worst year for stocks since 2008, nearly 70 percent of all investors lost money last year, and it is being projected that the final numbers will show that close to 1,000 hedge funds permanently shut down within the last 12 months.  This is what the early stages of a financial crisis look like, and the worst is yet to come.

If we were entering another 2008-style crisis, we would expect to see junk bonds crashing. When financial trouble starts, it usually doesn’t start with the biggest and strongest companies.  Instead, it usually starts percolating on the periphery.  And right now bonds of firms that are considered to be on the risky side of things are rapidly losing value.

In the chart below, you can see that a high yield bond ETF that I track very closely known as JNK started crashing in the middle of 2008.  This crash began to unfold before the horrific crash of stocks in the fall.  Investors that saw junk bonds crashing in advance and pulled their money out of stocks in time saved an enormous amount of money.

Now, for the very first time since the last financial crisis, we are seeing junk bonds crash again.  In December, there was finally a sustained crash through the psychologically-important 35.00 level, and at this point JNK is sitting a bit below 34.00.  This stunning decline is a giant red flag that tells us that stocks will soon follow in the exact same direction…

In 2015, Third Avenue Management shocked Wall Street when they froze withdrawals from a 788 million dollar mutual fund that was highly focused on junk bonds.  Investors that couldn’t get their money out began to panic, and other mutual funds now find themselves under siege.  If junk bonds continue to crash, this will just be the beginning of the carnage.

One of the big reasons why junk bonds are crashing is because of the crash in the price of oil.  Over the past 18 months, the price of oil has plummeted from $108 a barrel to $37 a barrel.

There has only been one other time in all of history when we have ever seen an oil price crash of this magnitude. That was in 2008 – just before the greatest financial crisis sincethe Great Depression… 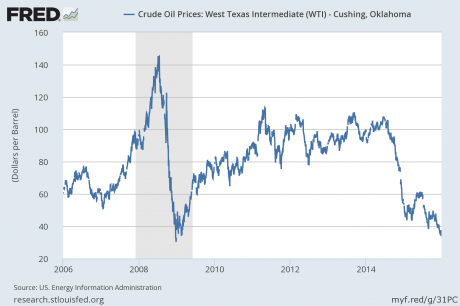 Why can’t people see the parallels?

Crashes are happening all around us, and yet so many of the “experts” seem completely blind to what is going on.

Unlike 2008, the price of oil is not expected to rapidly rebound any time soon.  The following comes from CNN…

Crude prices dropped a whopping 35% last year and are hovering around $37 a barrel. That’s a level not seen since the global financial crisis.

It won’t get better any time soon. Most oil experts believe prices will bounce back in late 2016, but they expect more pain first.

Goldman Sachs forecasts that oil will average about $38 a barrel in February, even lower than for most of 2015.

Meanwhile, the prices of industrial commodities have been crashing as well.  For example, the chart below shows that the price of copper started crashing hard just before the great financial crisis of 2008, and the exact same thing is happening once again right before our very eyes… 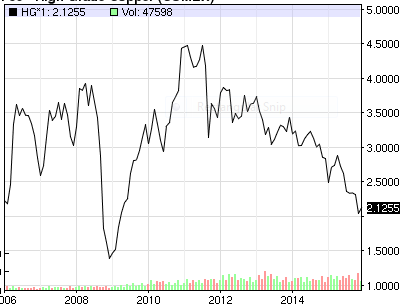 Things are unfolding just as we would expect they would during the initial stages of a new global financial crisis.

And we have already seen a full blown stock market crash in many of the largest economies around the planet.  For instance, just look at what has been happening inBrazil.  The Brazilians have the 7th largest economy in the world, and Goldman Sachs says that they have plunged into an “outright depression“.  In the chart below, you can see the sharp downturn that took place in August, and Brazilian stocks actually kept falling all the way through the end of 2015… 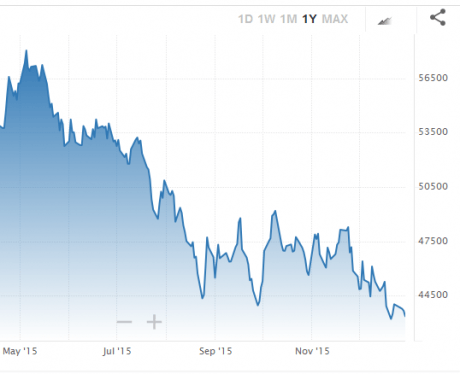 We see a similar thing when we look at our neighbor to the north.  Canada has the 11th largest economy on the entire planet, and I recently wrote a lengthy article about the economic difficulties that the Canadians are now facing.  2015 was a very bad year for Canadian stocks as well, and they just kept falling steadily all the way through December… 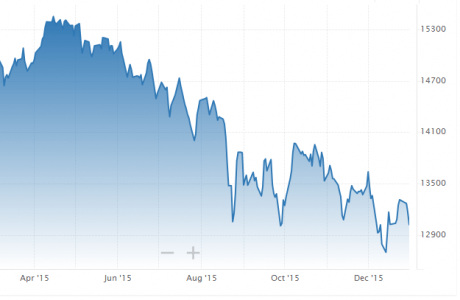 Of course nobody can forget what happened to China.  The Chinese have the second largest economy on the globe, and news about their economic slowdown in making headlines almost every single day now.

Last summer, Chinese stocks crashed about 40 percent, and they did manage to bounce back just a bit since then. But they are still down about 30 percent from the peak of the market… 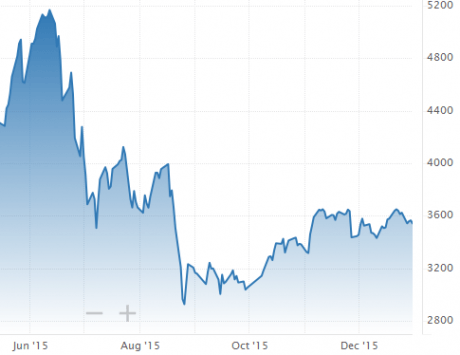 And there is plenty more that we could talk about.  European stocks just had their second worst December ever, and Japanese stocks are down about 500 points in early trading as I write this article.

Here in the United States, the Dow Jones Industrial Average, Dow Transports, the S&P 500 and the Russell 2000 all had their worst years since 2008.  As I mentioned the other day, 674 hedge funds shut down during the first nine months of 2015, and it is being projected that the final total for the year will be up around 1000.

But we aren’t hearing much about this financial carnage on the news yet, are we?

Many people that I talk to still think that “nothing is happening”, but don’t you dare say that to Warren Buffett.

How would you feel if you lost 7.8 billion dollars in a single year?

If you run a business, you may have noticed that fewer people are coming in and it seems like those that do come in have less money to spend.  Economic activity is slowing down, and inventories are piling up.  In fact, wholesale inventories have now risen to the highest level that we have seen since the last recession… 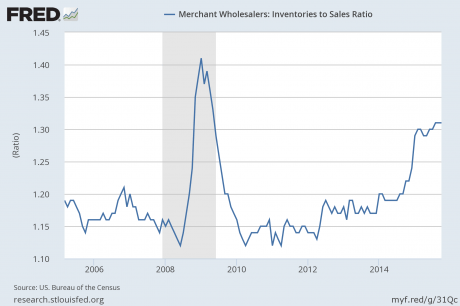 Do you notice a theme?

So many things that have not happened in six or seven years are now happening again. 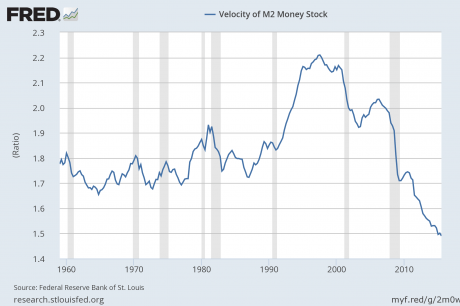 A big reason for this is the ongoing decline of the middle class.  In 2015, we learned that middle class Americans now make up a minority of the population for the first time ever.

But if you go back to 1971, 61 percent of all Americans lived in middle class households.

Meanwhile, the share of the income pie that the middle class takes home has also continued to shrink.

In 1970, the middle class brought home approximately 62 percent of all income. Today, that number has fallen to just 43 percent.

As the middle class is systematically destroyed, the number of Americans living in poverty just continues to grow. And those that often suffer the most are the children.  It may be hard for you to believe, but the number of homeless children in the U.S. has increased by 60 percent over the past six years.

How in the world can anyone dare to claim that “things are getting better”?

Anyone that says that should be ashamed of themselves.

We are in the midst of a long-term economic collapse that is now accelerating once again.

Anyone that tries to tell you that “things are getting better” and that 2016 is going to be a better year than 2015 is simply not being honest with you.

A new global financial crisis erupted during the last six months of 2015, and this new financial crisis is going to intensify throughout the early months of 2016.  Financial institutions will begin falling like dominoes, and this will result in a great credit crunch around the world.  Businesses will fail, unemployment will skyrocket and millions will suddenly be faced with economic despair.

By the time it is all said and done, this new financial crisis will be even worse than what we experienced back in 2008, and the suffering that we will see around the world will be off the charts.

So does that mean that I am down about this year?

Not at all.  In fact, my wife and I are greatly looking forward to 2016.  In the midst of all the chaos and darkness, there will be great opportunities to do good and to make a difference.

What a great shaking comes, people go looking for answers.  And I think that this will be a year when millions of people start to understand that our politicians and the mainstream media are not telling them the truth.

Yes, great challenges are coming.  But now is not a time to dig a hole and try to hide from the world.  Instead, this will be a time for those that have prepared in advance to love others, help others and show them the truth.

Are you ready to be a light during the dark times that are coming?