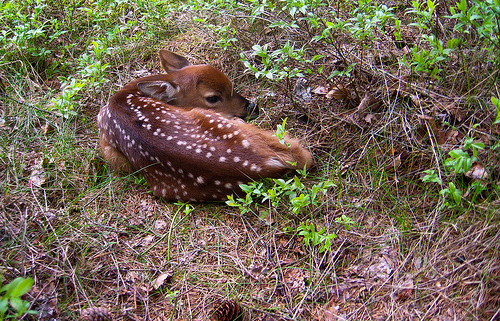 “Come and see what our God has done, what awesome miracles he performs for people!” NLT Bible Paraphrase

The story is told of long ago on one of the hottest days of the dry season. They had not seen rain in almost a month. The crops were dying. Cows had stopped giving milk. The creeks and streams were long gone back into the earth. It was a dry season that would bankrupt several farmers before it was through.

Every day, farmers would go about the arduous process of trying to get water to their fields. One creative idea had involved taking a truck to the local water rendering plant and filling it up with water. But severe rationing had cut everyone off. If they didn’t see some rain soon — everything would be lost.

It was on this day that one mom learned the true lesson of sharing and witnessed the only miracle she ever saw with her own eyes.

This day mom was in the kitchen making lunch for dad when she saw six-year-old Jimmy walking toward the woods. He wasn’t walking with the usual carefree abandon of a youth but with a serious purpose. She could only see his back. He was obviously walking with a great effort — trying to be as still as possible.

Jimmy disappeared into the woods — then almost immediately he came running out again toward the house. Mom went back to making sandwiches; thinking that whatever task he had been doing was completed.

Moments later, Jimmy was once again walking in that slow purposeful stride toward the woods. This activity went on for an hour — walking carefully to the woods and running back to the house.

Finally Mom couldn’t take it any longer and crept out of the house and followed little Jimmy on his journey (being very careful not to be seen. Obviously he
was doing important work and didn’t need his mom checking up on him).

Jimmy was cupping both hands in front of him as he walked being very careful not to spill the water he held in them. Maybe two or three tablespoons were held in his tiny hands. Mom sneaked close as he went into the woods. Branches and thorns slapped his little face, but he did not try to avoid them. He had a much higher purpose.

As mom leaned in to spy on him, she saw the most amazing site.

Several large deer loomed in front of him. Jimmy walked right up to them. Mom almost screamed for him to get away. A huge buck with elaborate antlers was dangerously close. But the buck did not threaten him — he didn’t even move as Jimmy knelt down. And there was a tiny fawn lying on the ground, obviously suffering from dehydration and heat exhaustion; it lifted its head with great effort to lap up the water cupped in Jimmy’s hand.

When the water was gone, Jimmy jumped up to run back to the house as mom hid behind a tree. She followed him back to the house to a spigot to which had been shut off. Jimmy opened it all the way up and a small trickle began to creep out. He knelt there, letting the drip, drip slowly fill up his makeshift “cup,” as the sun beat down on his little back. And it became clear to mom about the trouble he had gotten into for playing with the hose the week before. And the lecture he had received about the importance of not wasting water. And obviously the reason he didn’t ask for any help.

Time stood still for the drops to fill his hands. When he stood up and began the trek back, mom was there in front of him. His little eyes just filled with tears. “I’m not wasting,” was all he said.

As he began his walk, mom joined him — with a small pot of water from the kitchen. She let him tend to the fawn. It was his job. Mom just stood on the edge of the woods watching the most beautiful heart she had ever known — working so hard to save another life.

As tears rolled down moms face and began to hit the ground, they were suddenly joined by other drops — and more drops — and more.  Mom looked up at the sky. It was as if God, himself, was weeping with pride.

Prayer: Father thank you that you care for me and your miracles are as real today as when Jesus walked on the earth. In the name of the Lord Jesus Christ. Amen!
Africa 2015 support to date: $7,872.95 Remaining needed: $30,127.05 Cross Giving Click Here