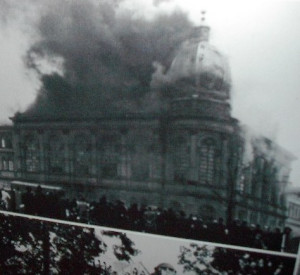 Opinion: ‘If Israel Goes Down, We All Go Down‘

REMARKS published in a Spanish newspaper on January 15, 2008…All European Life Died in Auschwitz. Previously printed here as “Opinion: ‘If Israel Goes Down, We All Go Down‘
As Jews Go, So Goes Europe
Joseph Puder
The latest target of Islamist terror was Denmark’s Jewish community. Last Saturday night (2/14/2015), the Danish news media identified a Danish-born man of Palestinian-Arab origin, Omar Abdel Hamid El-Hussein, as the man who shot and killed a Jewish man (Dan Uzan) outside Copenhagen’s main synagogue.

It’s apparent that the moratorium on anti-Semitism enacted in Europe immediately after the Holocaust is over. In fact, it has never been truly enforced. Europe has witnessed a consistent pattern of attacks on Jews and Jewish institutions, particularly in the last few years. Vociferous anti-Israel European media and European campuses have become the domain of Islamic and leftist anti-Semitic propagandists, in the guise of anti-Zionism. European governments that endlessly appease and pander to Palestinian, Arab, and Muslim sensibilities have created fertile grounds for Islamist terror to sprout. Attacks on Jews by native-born European Muslims of Arab background have been steadily growing. The hate Europe’s Jews experience daily is reminiscent of the 1930’s, but this time they will not wait for another Holocaust to happen. They are moving to Israel and North America, taking with them their education and talents that so richly contributed to European culture and economy.
Israeli Prime Minister Benjamin Netanyahu appealed  (2/15/2015) to the Jews of Denmark just as he did to the Jews of France last month to move to Israel after a Jewish man was killed in an attack outside Copenhagen’s main synagogue. Netanyahu said, “Israel is your home. We are preparing and calling for the absorption of mass immigration from Europe.”

He added, “Extremist Islamic terrorism has struck Europe again… Jews have been murdered again on European soil only because they were Jews,”
The current destabilized Middle East “winter” following the 2011 “Arab Spring,” bodes tragedy for Jews and Christian-Europeans alike. Jews are also, at the same time, the “canaries in the mine.” The failed states of Iraq, Syria, Libya, Yemen, and Hamas-led Gaza, and the metastasized Islamic State (IS) pose great danger to Europe and its Jews. Thousands of European Muslims have gone to Syria to enlist in the ranks of IS and Al-Qaeda.

Their next mission will be to take the war to the European infidels and colonialists to boot, who created the artificial Middle Eastern states of Iraq, Jordan, Lebanon, and Syria. First they will seek to kill the “Saturday people,” and then slowly but surely even the score with the “Sunday people.”

It began in Toulouse, France on March 19, 2012, when four Jews, including 30-year-old rabbi Jonathan Sandler and his two children, Aryeh and Gabriel, 6 and 3, and Miriam Monsonego, 8, were murdered outside the Ozer Hatorah Jewish School by French-born Islamist of Algerian descent Mohammed Merah. Like many of the other Islamist terrorists in France and elsewhere, he was a petty criminal radicalized in a French prison. He became a salafist who traveled to Afghanistan and Pakistan. Merah admitted anti-Semitic motivation for his killing of Jews during a 30-hour gun battle with police who besieged his Toulouse apartment. The same year also witnessed an attack on three Jews wearing kipot by 10 Muslims in Villeurbanne, France, near Lyon.

The May 24, 2014 terror attack on the Jewish Museum of Belgium in Brussels, killing four, including an Israeli couple touring the city (Emanuel and Miriam Riva of Tel Aviv, Dominique Sabrier, and Alexandre Strens), was not committed by a Rightist extremist, but was perpetrated by a radical Islamist of Arab extraction. According to the BBC (June 1, 2014) “Mehdi Nemmouche, 29, was arrested at a train station in Marseille. Paris prosecutor Francois Molins said the suspect had claimed responsibility for the May 24, 2014 attack” on the Brussels Jewish Museum that left four Jews dead. Francois Molins also said that “Nemmouche had spent over a year in Syria, and had links with radical Islamists.” Nemmouche, like Merah, spent 5-years in a French prison for robbery, where he was radicalized by Islamists.

(January 7, 2015) attacks in Paris on the Charlie Hebdo satirical newspaper that killed 12 staff members brought out millions of French protesters and leaders from throughout the world, including PM Benjamin Netanyahu. Two days later, on January 9, 2015, the Hypercacher Kosher Superette in Paris’s Porte de Vincennes was attacked, killing 4 Jews buying groceries for their Shabbat meal (Philippe Braham, 45, IT sales executive; Yohan Cohen, 22, a college student; Yoav Hattab, 21, college student; and Francois-Michel Saada, 64, a retiree). The killer, Amedy Coulibaly, who murdered the four Jewish shoppers and held 15 other hostages before being shot by the police, had pledged his allegiance to the Islamic State (IS). He was also a close friend of the Charlie Hebdo killers, brothers Said and Cherif Kouachi, whom he met in a Paris prison in 2005.

One common denominator all these Islamist killers shared was their stint in a French prison where they were radicalized, with deep anti-Semitic hatred. With the exception of Coulibaly, whose family came from a Malian Muslim immigrant family, all the other Islamist killers came from Arab North-African families. Prison, it seems, is the hotbed for jihadists, and it is time the French and other European authorities crack down on these laboratories of hate that are the European prisons.

The criminals are invariably Muslim immigrants, from Africa and the Middle East. The European political elites thirst for multi-culturalism, but continued Muslim immigration has a price tag – Islamic terror.
President Obama has refused to call Islamic terror by its name, nor has he been willing to denounce the killers of Jews in Paris, Brussels, and Copenhagen as Islamic terrorists, motivated by anti-Semitism. If the leader of the free world will not do it, who will? And if Europe won’t identify its Islamic problem, the future is predictable.

Previously printed as per above:

All European Life Died in Auschwitz.
I walk down the street in Barcelona and suddenly discovered a terrible truth –

Europe died in Auschwitz…We killed Six million Jews and replaced them with 20 million Muslims. In Auschwitz we burned culture, thought, creativity, and talent. We destroyed the chosen people, truly chosen, because they produced great and wonderful people who changed the world. The contribution of this people is felt in all areas of life: science, art, international trade, and above all, as the conscience of the world. These are the people we burned. Under the pretense of tolerance, and because we wanted to prove to ourselves that we are cured of the disease of racism, we opened our gates to 20 million Muslims, who bought us stupidity and ignorance, religious extremism and lack of tolerance, crime and poverty, due to an unwillingness to work and support their families with pride…And thus, in our misery, we have exchanged culture for fanatical hatred, creative skill for destructive skill, intelligence for backwardness and superstition…What a terrible mistake was made by miserable Europe.

WELL WHAT SHOULD I DO RIGHT NOW? WHY DO THE NATIONS CONSPIRE IN VAIN?
Scroll to top