‘This is a Christian nation’

Previous Next
‘This is a Christian nation’

A Free Press For A Free People Since 1997

Source: ‘This is a Christian nation’ 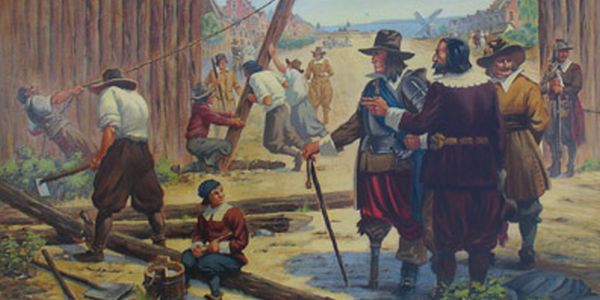 Spain’s Iron Duke fought the Ottoman Muslims, recapturing Tunis in 1535. He then turned to crush the Reformation in Holland in what is referred to as the “Spanish Furies,” 1572-1576, sacking and decimating the Dutch cities of Mechelen, Diest, Roermond, Guelders, Zutphen, Naarden and Haarlem.

The Netherlands fought an 80-year war of independence from Spain, led by William of Orange and aided by English soldiers sent by Queen Elizabeth I. The Dutch Republic of the Seven United Netherlands grew to become the foremost maritime and economic power in the world during its golden age, beginning in 1648.

The Dutch had settlements around the world, from Recife, South America to South Africa to New Zealand, including a monopoly on trade with Japan, Jakarta, Java and Asia.

Adopting the Calvinistic Protestant Dutch Reformed faith as the state religion, the Netherlands nevertheless exhibited a tolerance rare in Europe toward other faiths, including Remonstrants, Renaissance Humanism, Catholics, Anabaptists and Jews. The Pilgrims lived in the Netherlands for 12 years before sailing to settle Plymouth, Massachusetts.

The prosperous Netherlands attracted some of the brightest minds of the age:

The Dutch invented a way of financing their endeavors – the Amsterdam Stock Exchange. It was the first modern stock market. People could buy shares in the Dutch East India Company (Verenigde Oost-Indische Compagnie) whose ships sailed to Indonesia or Japan. When the ships returned filled with goods and spices, they would be paid a profit. And in case the ships sank, the Dutch invented “insurance” companies.

The Dutch experienced the first stock market crash with the Tulip Mania of 1636-1637. Tulips imported from Turkey became so popular that a single tulip bulb’s worth exploded to more than the average person’s yearly salary – then in one day it suddenly dropped to one-hundredth of its value, plunging the country into an economic depression.

The Dutch started the Dutch West India Company which sent Henry Hudson sailing west in hopes of finding a water route to India through North America. Though unsuccessful, Hudson claimed the land along the “Hudson” River, and founded the New Netherlands Colony, receiving its charter June 3, 1621. The Dutch began a New Amsterdam Stock Exchange which met on the street next to the wall of the settlement.

In 1624, the Chamber of Amsterdam wrote articles for the Dutch Colony, establishing the Dutch Reformed denomination: “They shall within their territory practice no other form of divine worship than that of the Reformed religion … and thus by their Christian life and conduct seek to draw the Indians and other blind people to the knowledge of God and His word, without, however, persecuting any on account of his faith, but leaving each one the use of his conscience.”

The New Amsterdam Charter of Freedoms, June 7, 1629, gave land to wealthy “patroons” who helped 50 families emigrate, stating: “Colonists shall … in the speediest manner … find out ways and means whereby they may support a Minister and Schoolmaster, that thus the service of God and zeal for religion may not grow cool.”

One Dutch family that immigrated was the Roosevelt family, as Franklin D. Roosevelt told the Detroit Jewish Chronicle, March 7, 1935: “All I know about the origin of the Roosevelt family in this country is that all branches bearing the name are apparently descended from Claes Martenssen Van Roosevelt, who came from Holland sometime before 1648.”

Beginning in 1639, Lutheran Germans, Swedes and Finns, as well as Anglicans from England, began immigrating, numbering 500 of the colony’s 3,500 population in 1655. Presbyterians erected their first meeting house on Eastern Long Island in 1640, and the first Jews arrived in the colony in 1654.

Though British established the Anglican Church, French Protestant Huguenots began arriving in 1680. The New York Charter of Liberties and Privileges (paragraph 27), Oct. 30, 1683, stated: “That no person or persons which profess faith in God by Jesus Christ shall at any time be any ways molested. … But that … every such person … fully enjoy his or their … consciences in matters of religion … not using this Liberty to Licentiousness. … The respective Christian Churches now in practice within the City of New York …. shall … enjoy … freedoms of their Religion in Divine Worship and Church discipline.”

The first Methodist meeting in the American colonies was in New York City in 1766. In 1781 was the first mention of a public Catholic worship service in New York. In 1811, the New York Supreme Court’s chief justice, Chancellor Kent, stated in the case of Peoples v. Ruggles: “Christianity was parcel of the law … that whatever strikes at the root of Christianity tends manifestly to the dissolution of civil government. … The people of this State, in common with the people of this country, profess the general doctrines of Christianity. … We are a Christian people, and the morality of the country is deeply engrafted upon Christianity, and not upon the doctrines or worship of those impostors.”

In 1838, the New York state Legislature wrote: “No people on the face of the globe are without a prevailing national religion. … With us it is wisely ordered that no one religion shall be established by law, but that all persons shall be left free in their choice and in their mode of worship. Still, this is a Christian nation. Ninety-nine hundredths, if not a larger proportion, of our whole population, believe in the general doctrines of the Christian religion. Our Government depends for its being on the virtue of the people, – on that virtue that has its foundation in the morality of the Christian religion.”

New York’s state Constitution, 1846, 1894, and 1938, stated in its preamble: “We, the People of the State of New York, grateful to Almighty God for our freedom, in order to secure its blessings, do establish this Constitution.”

Brought to you by AmericanMinute.com.