The American war against the Jews – Caroline B. Glick

Previous Next
The American war against the Jews – Caroline B. Glick

By Caroline B. Glick 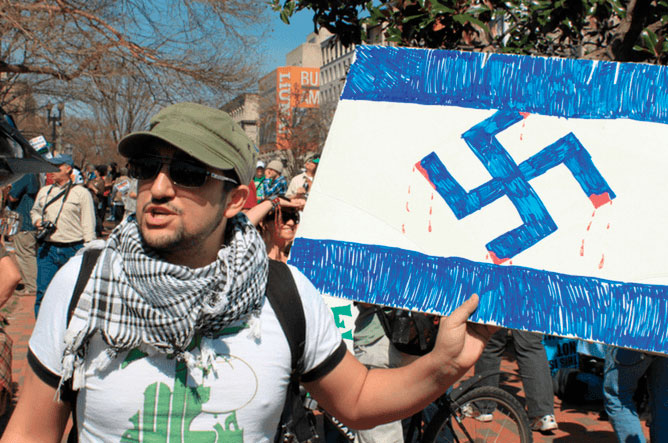 The foundations of American Jewish life are under assault today in ways that were unimaginable a generation ago. Academia is ground zero of the onslaught. The protest movements on campuses are first and foremost anti-Jewish movements.

For the past decade or so, Jewish communal leaders and activists have focused on just one aspect of this anti-Jewish campaign. Jewish leaders have devoted themselves to helping Jewish students combat the direct anti-Semitism inherent to the anti-Israel student movements.

Despite the substantial funds that have been devoted to fighting anti-Israel forces on campuses, they have not been diminished. To the contrary, with each passing year they have grown more powerful and menacing.

Consider a sampling of the anti-Jewish incidents that took place over the past two weeks.

Two weeks ago, Daniel Bernstein, a Jewish student at University of California Santa Cruz and a member of the university’s student government was ordered not to vote on a resolution calling for the university to divest from four companies which do business with Israel.

Bernstein represents UCSC’s Stevenson College at the university student government. He is also vice president of his college’s Jewish Student Union. Ahead of the anti-Israel vote, Bernstein received a message from a member of his college’s student council ordering him to abstain from the vote on Israel divestment.

The student council, Bernstein was informed, had determined that he was motivated by “a Jewish agenda,” and therefore couldn’t be trusted to view the resolution fairly.

In the same message, Bernstein’s correspondent gave him a friendly “heads up” that his fellow students are considering removing him from office because he is a Jew supported by the Jewish community.

To his credit, Bernstein ignored his orders. He voted to oppose the anti-Israel resolution.

Following the incident Bernstein published a statement decrying the anti-Jewish discrimination and hatred now rampant on his campus.

Among other things, he wrote, “I wish that [my] being subjected to anti-Semitism was a shocking new occurrence. But the truth is that I’m not shocked. I’m not shocked because this hatred and ignorance has followed me everywhere. I’m not shocked because Jewish students have been targeted with this vile racism all over the [University of California] UC system for years, and especially since BDS became a major issue of discussion. Anti-Semitism … has … become an inseparable part of campus politics right here at UC Santa Cruz and across the UC system.”

Then there is the growing movement of professional associations that boycott Israel.

Last week the National Women’s Studies Association passed a resolution to join the BDS movement. The resolution, written in turgid, incomprehensible prose, proclaimed that the only state in the Middle East that provides full and equal rights to women is so evil that it must be singled out and boycotted, sanctioned and divested from.

Whereas Bernstein was personally targeted, and the NWSA criminalizes Israel, at CUNY, on November 12, a group of protesters targeted the Jewish community as a whole.

That day, as part of a national “million student march,” where students demanded free tuition, anti-Jewish students at CUNY rallied at Hunter college and introduced a new demand: the expulsion of all Israel supporters from campus.

Congregating in the center of the campus, some 50 students chanted in unison, “Zionists out of CUNY!”

Aside from an anodyne statement in favor of “freedom of expression,” CUNY administrators had nothing to say about the affair.

For their part, Hunter’s administrators issued a statement “condemning the anti-Semitic comments,” made by the rally participants.

But no disciplinary measures were taken against any of them.

Speaking to the Algemeiner, StandWithUs’s northeast regional director Shahar Azani said that the Hunter incident “is another example of the hijacking of various social causes by the anti-Israel movement.”

In making this claim, Azani was merely repeating the position taken by Jewish communal leaders and activists involved in the fight to defend Jews and Israel on university campuses. Unfortunately, this position is incorrect.

According to the prevailing wisdom guiding Jewish communal responses to the onslaught against Jewish students on campuses, the anti-Israel and anti-Jewish movements are distinct from the wider anti-liberal forces now disrupting campus life throughout the US. As Jewish leaders see things, there is no inherent connection between the protesters embracing victimhood and demanding constraints on freedom of expression, inquiry and assembly (and free tuition), and those who seek to drive Jews out of the public sphere on college campuses.

In other words, they believe that Zionists can be crybullies too.

The crybully movement, which demands that universities constrain freedom to cater to victim groups, is necessarily hostile to Jews. This is the reason that at the same time that “victims” from blacks to transgenders are coddled and caressed, Jews have emerged as the only group that is not protected. Indeed, the BDS movement requires universities to discriminate against Jewish students.

The inherent conflict between the tenets of the “progressive” movement and Jewish rights is exposed in a guide to racial “microaggressions” published earlier this year by the University of California. Students and faculty must avoid committing these “microagressions” if they want to stay on the right side of campus authorities and the law.

The UC defines “microagressions” as, “brief, subtle verbal or non-verbal exchanges that send denigrating messages to the recipient because of his or her group membership (such as race, gender, age or socio-economic status).”

Transgressors can expect to be accused of engendering a “hostile learning environment,” an act that can get you expelled, fired and subjected to criminal probes.

As law professor Eugene Voloch reported in The Washington Post last June, among other things, the list of offenses includes embracing merit as a means of advancing in society. A statement along the lines of “I believe the most qualified person should get the job” can destroy a person’s academic career.

So too, statements rejecting race as a significant factor in judging a person’s competence are now deemed racist. For instance statements to the effect of, “There is only one race, the human race,” “America is a melting pot” or “I don’t believe in race” can land a student or instructor in hot water.

In a column last week, Dennis Prager noted that the list castigates as racism all the pillars of liberal society in America. The list, he wrote, shows that “the American university is now closer to fascism than to traditional liberty.”

Prager is right, of course. But the fascist takeover of American academia will not affect all Americans equally.

Jews are the greatest victims of this state of affairs.

For the better part of the past hundred years, the upward mobility of American Jewry has been directly correlated with America’s embrace of meritocratic values. The more Americans have looked past race and ethnicity and judged people by their talents, characters and professional competence, the higher Jews have risen. Conversely, where qualities other than competence, talent and professionalism have determined social and professional status, Jews have suffered. They have faced discrimination and their opportunities to advance have been limited.

Academia is but a small component of American society. But to earn a place in America’s middle, upper-middle and upper classes, you need at least an undergraduate degree. Moreover, university graduates go on to populate and head the state and federal governing bureaucracies, the business world, the entertainment sector and every other major area of human endeavor in American society.

Academia’s simultaneous rejection of core liberal principles and legitimization of anti-Semitic forces is not a coincidence. Jews are a constant reminder that human agency – rather than race and other group identities – has everything to do with a person’s ability to excel in academics and beyond. For fascist principles to hold, Jews must be demonized and hated.

The intrinsic link between anti-Semitism and fascism and their simultaneous embrace by a key American institution means that the equal rights and freedoms of Jews are far more threatened in America today than most Jewish leaders and activists have realized. The Jewish community’s failure to date to successfully defeat the anti-Semitic forces on campuses owes at least in part to its failure to recognize or contend with the dual nature of the problem.