Shmitah and Messiah: Is this the Year Before His Arrival? – Israel News

Previous Next
Shmitah and Messiah: Is this the Year Before His Arrival? – Israel News 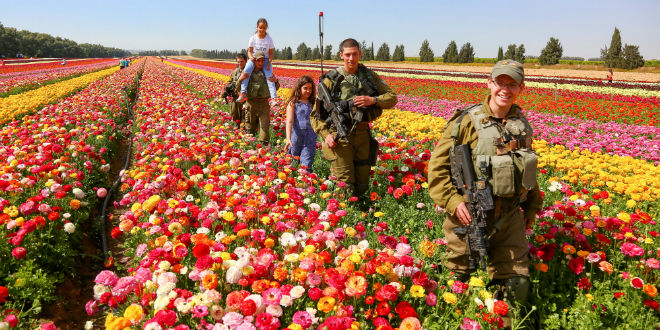 Israeli soldiers seen walking among the flower beds at Nir Yitzhak, Southern Israel, on the spot which was a staging area for Israeli tanks and soldiers during last summer’s “Operation Protective Edge”. (Photo: Edi Israel/FLASH90)

In a recent Breaking Israel News article, we presented some statements made by Rabbi Chaim Kanievsky, a highly respected rabbi in the Orthodox world, in which he instructed Jews to come to Israel soon “or there won’t be enough room on the airplanes.”

Many readers were interested in his statements and wondered about the source for the Rabbi’s insistence upon connecting the coming of the Messiah with the year after the Shemitah, the Sabbatical year. The issue takes on particular urgency since the current year is a Sabbatical year, ending September 13.

Sources close to Rabbi Kanievsky explain that he is not making a prophetic statement predicting a certain time period. The Rabbi is simply relating to well-known classical sources on the subject that discuss the Messiah and place it in a specific time-frame.

This year, 5775 in the Jewish calendar, is a Shemitah year. The Shemitah comes every seven years, making it a form of Sabbath that occurs on a yearly, rather than a weekly, cycle. The Sabbath is generally characterized by a cessation that signifies accepting God’s greater authority in the world. Practically during the weekly Sabbath, this means a cessation of labor, showing that despite spending six days working for the material, we stop on the seventh day to show that God is the true master. The same is true for the Shemitah year. We work the land for six years, and on the seventh, we leave the land fallow and the fields are left open for anyone to come and take of the fruit. There are several other cases of cycles of seven that are related to this, for example the seven year cycle of a Hebrew slave before he is set free, as described in Exodus 21:2. Another aspect of the Shemitah year also has implications for loans, for the same reason.

Shemitah was commanded to Israel at Mount Sinai. After 40 years in the desert, the Jews entered the Land of Israel, but the land must be owned in order for it to be forfeited as the verse specifies. So 14 years later, after they had completed conquering the land, they began counting the seven year cycle. The first Shemitah year was the 21st year after the Jewish nation had entered the land.

The Shemitah is part of a larger framework of seven Shemitah cycles, in which we count 49 years, and then the 50th year is the Jubilee year, as described in Leviticus, chapter 25. The Jubilee year is observed only when all of the Nation of Israel is in the Land of Israel. Therefore, when the Jews returned from Babylonian Exile, since many chose to remain in the Diaspora, the Jubilee was not observed. For the same reason, it is not observed today in modern Israel.

The Babylonian Talmud in the Tractate of Sanhedrin, 97a, brings the verse from Amos 9:11:

“On that day, will I raise up the fallen booth (Sukkah) of David.”

This verse comes in the context of a prophecy about God bringing the nation of Israel back from exile among the nations. Amidst descriptions of the days preceding the Messiah, the Talmud says:

“As it is written, in that day I will raise up the tabernacle of David that is fallen. Our Rabbis taught: in the seven year cycle at the end of which the son of David will come-in the first year, this verse will be fulfilled.”

The Talmud is saying explicitly that the Messiah will come in the first year after the Shemitah.  It should be noted that the Talmud describes the days before the Messiah in depth, and they are especially difficult times.

Rabbi Kanievsky was, of course, familiar with this source and was aware we are now in a sabbatical year. His instructions to come to Israel took into account that there was a much greater chance that the Messiah will be coming next year. It is interesting to note that Rabbi Kanievsky was very diligent about observing the Shemitah and ruled by more stringent rulings concerning this Biblical commandment.

In addition to the sources brought in the previous article, a recording was made in the aftershock of the horrifying terror attack in November in a synagogue in Har Nof, Jerusalem. Rabbi Kanievsky was asked how to comfort the people so they would be less afraid. He said, “atonement” (kappara) many times. When pressed for an explanation, he said, “It is an atonement before the Messiah can come.”

Rebbetzin Chana Bracha Seigelbaum, founder and director of Midreshet B’erot Bat Ayin, makes a remarkable observation that emphasizes the role of the Shemitah in the process of national redemption:

It is clear that Rabbi Kanievsky was relating to Babylonian Talmud, which says specifically that the Messiah will come in the year following the Shemitah. Whether it will come after the Shemitah year we are presently about to complete has yet to be seen. What is undeniable is that there is a clear significance to the time period immediately following a Shemitah year in terms of national redemption.

Rabbi Kanievsky called upon people to do Tshuva, repentance, that leads to a return to faith and good actions in order to actualize the unique potential for redemption that is within us right now. If our actions are correct and coincide with God’s will, then the Messiah will come.