I just heard the penal sentence demanded by the Public Prosecutor: a penalty of 5,000 euros.

Speaking about one of the biggest problems of our country – the problem with Moroccans – is now punishable, according to the elite. And, hence, we are slowly but surely losing our freedom of speech. Even asking a question is no longer allowed. Even though millions of people agree. And Moroccans have suddenly become a race. So if you say something about Moroccans, you are now a racist. Nobody understands that. It is utter madness. Only meant to shut you and me up. 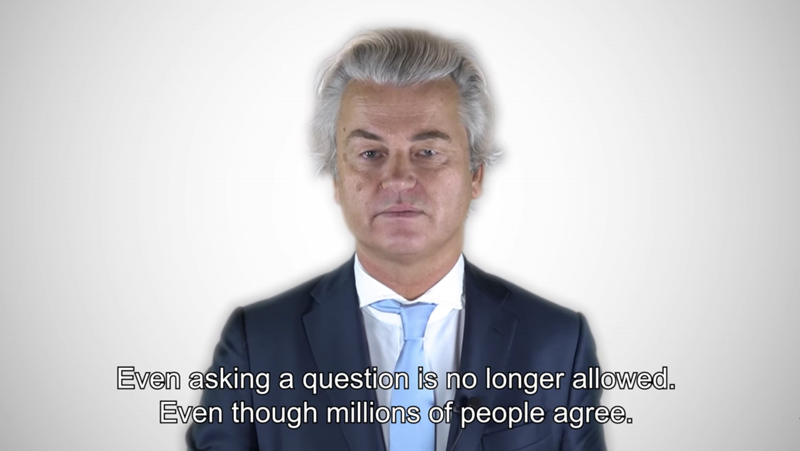 While in other countries the people send the elite home, here they want to silence an opposition leader. The Netherlands is running the risk of becoming a dictatorship. It looks like Turkey. The differences between the Netherlands and Turkey are getting smaller. The opposition is silenced.

I was elected by nearly a million people. That number will be even higher on March 15th next year. And it is my duty to talk about the problems, even when the politically-correct elite led by Prime Minister Rutte prefers not to mention them. Because looking away and remaining silent is not an option.

What is the use of political cowards who no longer dare to speak the truth? Who are silent about the problems in our country? Who pander to the government? Who cowardly look the other way?
Nothing at all! Putting one’s head in the sand is cowardliness.

And if you must keep quiet about problems, because simply asking a question has become punishable, the problems will only grow bigger. Then, the Netherlands will become a dictatorship of fearful and cowardly politicians.

I will never accept that. I will continue to fight for a free and safe Netherlands. That is why Islamic terrorists have been trying to kill me for 12 years. Today, these terrorists rejoice. Wilders is going to be punished. The Public Prosecutor has made himself their ally today.

But I will not allow anyone to shut me up!
No terrorist will be able to silence me!
No prosecutor in a black gown or cowardly prime minister will get me on my knees!
I shall therefore not care about their penal demand at all. They can do whatever they want. It will only make me stronger. I will only get more motivated.

And you can support me with this. By continuing to fight with me for the preservation of freedom of expression. For the maintenance of a safe and free Netherlands. Our country.

Geert Wilders is a member of the Dutch Parliament and leader of the Party for Freedom (PVV).