Reports: 3 top aides had private accounts while Hillary was at State Department 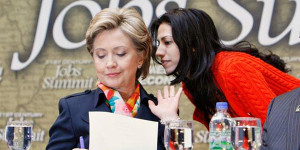 At least three of Hillary Clinton’s top aides – including one with ties to the Muslim Brotherhood – used emails hosted on Clinton’s private server while she was secretary of state, according to several reports.

At a news conference Tuesday at the U.N., Clinton directly addressed media about the revelation that she conducted her business as secretary of state using a private email account instead of the secure and archived government system.

She acknowledged she deleted thousands of personal emails and said she turned over hard copies of messages to the State Department that she deemed to be work related.

But Clinton apparently wasn’t the only one at the State Department using private email.

“The State Department has evidence of this,” he said.

The London Daily Mail confirmed one of Abedin’s email addresses was listed as Huma@clintonemail.com.

Abedin’s emails would be of particular interest because she has known ties to the Muslim Brotherhood – a group that’s bent on “destroying Western civilization from within” – and other Islamic supremacists.

“Those are questions that I think (Rep.) Trey Gowdy and the House Benghazi Committee is going to want to look at very carefully.”

What do YOU think? Will Hillary’s email troubles delete her run for president? Sound off in today’s WND poll
Government watchdog Judicial Watch has filed a lawsuit against the State Department seeking all emails from 2009 to 2013 between Clinton, Abedin and Nagla Mahmoud, wife of Muslim Brotherhood leader Mohammed Morsi.

“Now we know why the State Department didn’t want to respond to our specific request for Hillary Clinton’s and Huma Abedin’s communications,” Judicial Watch President Tom Fitton said in a statement. “The State Department violated FOIA law rather than admit that it couldn’t and wouldn’t search the secret accounts that the agency has known about for years. This lawsuit shows how the latest Obama administration cover-up isn’t just about domestic politics but has significant foreign policy implications.”

Get the details about what really happened in one of America’s biggest foreign operations failures, in “The REAL Benghazi Story.”