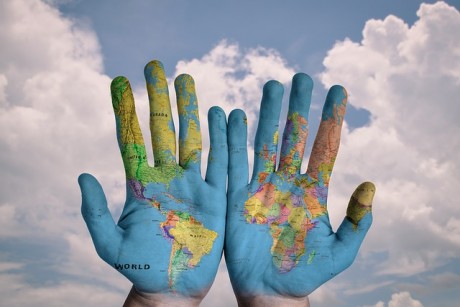 The global elite have never been closer to their goal of a united world.  Thanks to a series of interlocking treaties and international agreements, the governance of this planet is increasingly becoming globalized and centralized, but most people don’t seem alarmed by this at all.  In the past 30 days, we have seen some of the biggest steps toward a one world government, a one world economy and a one world religion that we have ever witnessed,but these events have sparked very little public discussion or debate.  So please share this article with as many people as you can.  We need to wake people up about this before it is too late.

From September 25th to September 27th, the United Nations launched a “new universal agenda” for humanity.  Those are not my words, they actually come directly out of the core document for this new agenda.  The Pope traveled to New York City to give the address that kicked off this conference, thus giving his considerable endorsement to this new plan.  Virtually every nation on the entire planet willingly signed up for the 17 goals that are included in this plan, but this stunning turn of events made very few international headlines.

The United Nations is promising that if we all work together that we can turn our planet into some kind of “utopia”, but the truth is that all of this talk about “unity” masks a very insidious agenda.  The following comes from a recent piece by Paul McGuire, the author of a groundbreaking new book entitled “The Babylon Code”…

The UN is not asking permission, but issuing a command that the entire planet will commit to 17 sustainable development goals and 169 sustainable development targets designed to radically transform our world by 2030. The UN 2030 plan promoted by the Pope will advance Agenda 21 on steroids. Through a controlled media the mass populations will be told that this is all about saving the environment and “ending poverty.” But that is not the true agenda of Agenda 21. The true agenda of Agenda 21 is to establish a global government, global economic system, and global religion. When UN Secretary General Ban Ki-Moon spoke of “a dream of a world of peace and dignity for all” this is no different than when the Communists promised the people a “workers paradise.”

None of this is by accident.  We are being trained to think of ourselves as “global citizens” that belong to a “global community”.  Decades ago, most Americans would have been up in arms over something like this.  But now most people just seem to accept these changes passively.  Very powerful secret societies and international organizations have been moving us in this direction for a very long time, and most Americans simply have no idea what is happening.  Here is more from Paul McGuire…

The United Nations is a de facto global government and does not rule by the “consent of the governed.” The United Nations is a global government to which American politicians of both parties have surrendered our Constitutional rights. If you look at the Republican Presidential debates you see the vast majority of those running are “bought men and women.” They are there to do the bidding of their true masters, the international banking families and their interlocking secret societies. If a candidate has a different set of beliefs than the “Orwellian group think” which constitutes domestic and foreign policy, he is allowed to go only so far.

Who are these powerful elite groups and the secret societies that run them? As we extensively document in our new book,The Babylon Code, co-authored by this author and Troy Anderson, a Pulitzer Prize-nominated investigative journalist, there exists a very real network of semi-secretive and secret groups. Groups like The Council on Foreign Relations, The Trilateral Commission, Royal Institute of International Affairs, United Nations, Club of Rome, The Bilderberg Group, and others control presidents, prime ministers, media networks, politicians, CEO’s, and entire nations. You will almost never hear any substantive analysis by the media, which is controlled by these groups nor of attempts at holding them accountable by governments around the world.

Another way that our planet is being “united” is through the use of international trade agreements.

The ultimate goal is for the entire world to become a “single market” with uniform laws, rules and regulations.  But as we merge our economy with the rest of the globe, the United States has been losing tens of thousands of businesses and millions of jobs as the monolithic corporations that now dominate our economy shift production to areas where labor is much cheaper.  This is absolutely destroying the middle class, but very few people seem to care.

Negotiations for one of the biggest international trade treaties that the world has ever seen recently concluded.  The Trans-Pacific Partnership, also known as “Obamatrade”, would represent a giant step toward a truly unified global economy.  The following is an excerptfrom one of my previous articles…

We have just witnessed one of the most significant steps toward a one world economic system that we have ever seen.  Negotiations for the Trans-Pacific Partnership have been completed, and if approved it will create the largest trading bloc on the planet.  But this is not just a trade agreement.  In this treaty, Barack Obama has thrown in all sorts of things that he never would have been able to get through Congress otherwise.  And once this treaty is approved, it will be exceedingly difficult to ever make changes to it.  So essentially what is happening is that the Obama agenda is being permanently locked in for 40 percent of the global economy.

The United States, Canada, Japan, Mexico, Australia, Brunei, Chile, Malaysia, New Zealand, Peru, Singapore and Vietnam all intend to sign on to this insidious plan.  Collectively, these nations have a total population of about 800 million people and a combined GDP of approximately 28 trillion dollars.

And do you want to know who pushed really hard to give Obama fast track negotiating authority so that these negotiations could be brought to a successful conclusion?

It was the traitorous Republican leadership in Congress.  They did everything that they could to pave the way for Obamatrade.

We are also seeing some stunning moves in the direction of a one world religion.

In recent years, you may have noticed that it has become very trendy to say that all religions are just different paths to the same God.  In fact, many prominent religious leaders are now openly proclaiming that the two biggest faiths on the entire planet, Christianity and Islam, worship the exact same deity.

For example, just consider what the Pope is saying publicly on this matter.  The following is an extended excerpt from one of my recent articles on End of the American Dream…

What Pope Francis had to say at St. Patrick’s Cathedral in Manhattan has received very little coverage by the mainstream media, but it was exceedingly significant.  The following is how he began his address…

In this moment, I give assurances of my prayers. I unite myself with you all. A prayer to almighty god, all merciful.

He did not choose those words by accident.  In Islam, Allah is known as “the all-merciful one”.  If you doubt this, just do a Google search.

And this is not the first time Pope Francis has used such language.  For instance, the following comes from remarks that he made during his very first ecumenical meeting as Pope…

I then greet and cordially thank you all, dear friends belonging to other religious traditions; first of all the Muslims, who worship the one God, living and merciful, and call upon Him in prayer, and all of you. I really appreciate your presence: in it I see a tangible sign of the will to grow in mutual esteem and cooperation for the common good of humanity.

Pope Francis clearly believes that Christians and Muslims worship the exact same God.  And so that helps to explain why he authorized “Islamic prayers and readings from the Quran” at the Vatican for the first time ever back in 2014.

What is happening is undeniable.

Of course we will not get there overnight.  It is going to take some time, and there are going to be quite a few bumps along the way.  In fact, I believe that our planet will experience an extreme amount of chaos before we actually get there.

But every major crisis will be used as an excuse to advance this agenda.  Virtually every solution that the elite offer us will involve more globalization and more centralization.  We will be told that all of our problems will be solved if humanity will just come together in unity.

For some, the goal of a “united planet” where we are all working together to eradicate things like poverty, war and disease makes all the sense in the world.

So what do you think?  Please feel free to share your thoughts by posting a comment below…