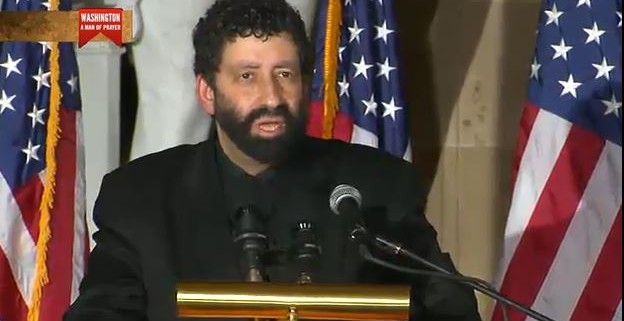 Rabbi Jonathan Cahn, author of the New York Times bestseller “The Harbinger” and the inspiration behind the “Isaiah 9:10 Judgment” movie, on Wednesday smacked down the Supreme Court’s assumption that it has the authority to redefine marriage.

Cahn’s comments followed by only about 24 hours the hearing in the august courtroom where the justices heard arguments on whether or not the U.S. government would mandate recognition of homosexual “marriage” across the country.

Washington warned the smiles of heaven can never be expected on a nation “that disregards the eternal rules of order and right which heaven itself hath ordained.”

He noted the Supreme Court opens sessions with the words, “God save the United States and this honorable court.”

“We are exchanging our light for darkness.”

The comments came at the 2015 “Washington: A Man of Prayer” service at the U.S. Capitol, an event that was livestreamed online and can be watched by signing up with WND.

The service is an effort by Rev. Dan Cummins to return prayer to the Capitol building, where generations of Washingtonians worshiped God under an open-doors policy.

“Washington: A Man of Prayer” commemorates the events of April 30, 1789, when, after being sworn in at Federal Hall, President Washington, accompanied by Congress, proceeded to St. Paul’s Chapel where they “offered dedicatory prayers to God in divine services on America’s behalf.”

Many members of Congress participated, but when Cahn took the speaker’s podium the warnings were loud and clear.

He said America’s biblical foundation was affirmed throughout history and the nation came into existence “solely for the glory and purposes of God.”

“No historian can rewrite that. No president can expunge that,” he warned. “If a thousand angels swore on a thousand Bibles that this was not the case, it would in no way alter the fact. … America was brought into existence for the will and purposes of God.”

He explained ancient Israel turned away from God.

“They drove God out of the government. They worshiped idols and served other gods. They celebrated immorality and they persecuted righteousness. The blessings of God were removed and replaced with judgments,” he said.

Now, he said, “America has made the same mistakes.”

He cited the deaths of 55 million through abortion.

“What we were warned never to do we now have done,” he thundered.

Moving to directly confront President Obama, whose pro-abortion and pro-homosexual agenda has been unparalleled in American history, he questioned what happens when a leader places his left hand on the Bible to assume to highest office in the land but with his right hand “enacts laws that violate the laws of God.”

“Mr. President, when you address the House, look up above the senators and the representatives, above the Supreme Court justices, you’ll see a face, the only full visage in that wall. It is the face of Moses. … It would say this, ‘No man can overrule the laws of God. No judgment of man can stand against the judgment of God’.” America, he warned, is faced with a critical decision, “Choose you this day whom you will serve … if the Lord be God, then follow Him. If Baal, then follow him and go to hell.”

Believers, he said, will “not bow down our knees to Baal,” the politically correct or anything other than God.

“Jesus the Messiah,” he said, “is the only answer, the only chance that America has that it might once again shine with the presence of the living God … and not go to hell.”

Cummins, a longtime pastor, first obtained permission from House Speaker John Boehner, R-Ohio, to use the hall in May 2012, the first time a private citizen had been allowed to hold a prayer service there in more than 120 years.

See a video that promoted the event:

Historically, as many as 2,000 people were in attendance for worship services in the Capitol after President Thomas Jefferson approved the events.

Services were held in the chamber where the House of Representatives met from 1807 to 1857, now called Statuary Hall.

Cummins, recalling Washington’s first inauguration, said “the world saw more than just the inauguration of the president of a new nation; it witnessed a watershed moment in history when the ideals penned in ink on parchment at Philadelphia’s Continental Congress would preserve what sword and patriots’ blood had inscribed on the field of battle.”

Cummins is founding pastor of Bridlewood Church in Bullard, Texas, and the director of church relations for Renewing American Leadership in Washington, D.C.

“I am certain the framework of our country, built not on economic status, race, or political standing, but rather on the foundation of faith and prayer, still stands as a monument of strength for all people everywhere. We, as a multi-ethnic nation have a rare and historical opportunity to unify ourselves as one church and rally to represent one culture-kingdom culture.”

Kenda Bartlett, executive director of Concerned Women for America in Washington, said, “Over 32 years ago Mrs. Beverly LaHaye, wife of Dr. Tim LaHaye, and a small group of Christian women gathered around a kitchen table to answer God’s calling to start a women’s public policy organization dedicated to putting faith and prayer back into the public square.

“Today that organization is Concerned Women for America (CWA), the nation’s largest public policy women’s organization with over 500,000 members. So we know first-hand the huge impact a small gathering of believers can make when God is at the center of their work. Likewise, CWA was honored be among the small group of Christian leaders and organizations to gather in Statuary Hall for the first annual ‘Washington: A Man of Prayer’ event observing George Washington’s inauguration address, which boldly called ‘We the People’ to a time of prayer.”