It is here: Court ruling paves way for mass confiscation of firearms in America –

Previous Next
It is here: Court ruling paves way for mass confiscation of firearms in America –

It is here: Court ruling paves way for mass confiscation of firearms in America 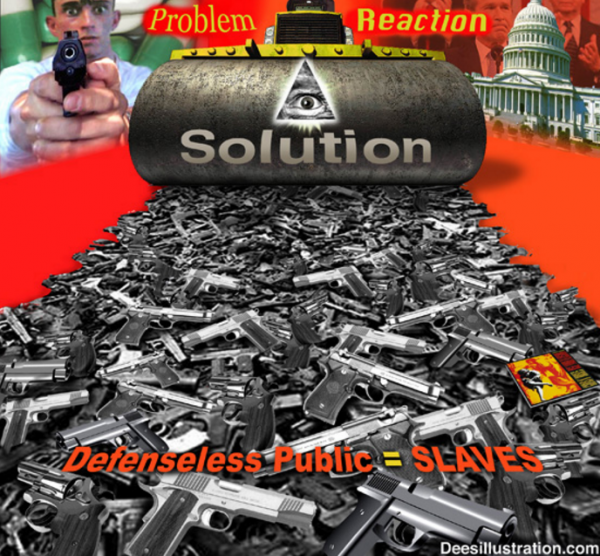 (INTELLIHUB) — In a ruling that directly paves the way for mass confiscation of firearmsin America, the U.S. Court of Appeals for the Second Circuit, in a much-anticipated decision, has upheld the constitutionality of the New York SAFE Act of 2013.

Shockingly, the court ruled that nearly all of the most drastic gun control law in the history of the United States did not violate the Second Amendment and is therefore constitutional.

That’s right, a law passed in the wake of Sandy Hook that included and paved the way for confiscation of millions of legally purchased firearms has been ruled “constitutional” with proponents already calling for a similar law to be enacted at the federal level.

As an article published by the American Thinker noted, “If the SAFE Act is upheld by the Supreme Court, nothing prevents Congress from summarily outlawing tens of millions of firearms overnight. Once those firearms become contraband, the government may confiscate and destroy them without compensating the owner (just as the government confiscates and destroys illegal drugs).

“The Second Circuit’s decision leaves the Second Amendment in its gravest peril ever.  Second Amendment rights are now hanging by a one-vote margin in the same Supreme Court that upheld Obamacare and declared a national right to gay marriage.

Constitutional conservatives and Second Amendment supporters ought to be terrified over the prospect of Justice Scalia having a heart attack during a Hillary Clinton presidency.” (and as we know Clinton is calling for mass confiscation herself)

In the weeks since the most recent mass shooting in the country, literally dozens of mainstream publications have promoted Australia as the country to look towards when considering new gun control laws in America.

“Despite the fact that for years gun control groups and anti-gun liberals have claimed that they only want “common sense” gun control, news outlets such as Salon and Slate are once again openly praising Australia’s controversial 1996 gun control law, a law that included amandatory gun buy back program under the threat of government force.

In the weeks since the recent shooting the article has become the top read report on the site as well as linked by dozens of other liberal news outlets. (emphasis mine)

On April 28, 1996, a gunman opened fire on tourists in a seaside resort in Port Arthur, Tasmania. By the time he was finished, he had killed 35 peopleand wounded 23 more. It was the worst mass murder in Australia’s history.

Twelve days later, Australia’s government did something remarkable. Led by newly elected conservative Prime Minister John Howard, it announced a bipartisan deal with state and local governments to enact sweeping gun-control measures. A decade and a half hence, the results of these policy changes are clear: They worked really, really well.

At the heart of the push was a massive buyback of more than 600,000 semi-automatic shotguns and rifles, or about one-fifth of all firearms in circulation in Australia.

The country’s new gun laws prohibited private sales, required that all weapons be individually registered to their owners, and required that gun buyers present a “genuine reason” for needing each weapon at the time of the purchase. (Self-defense did not count.) In the wake of the tragedy, polls showed public support for these measures at upwards of 90 percent.

Like most other articles praising Australia’s gun laws, the author of the Slate article completely leaves out the fact that the buyback program was mandatory which means that anyone that refused to go along with the program was subject to government raids and or violence.”

“REMEMBER, THESE ARE THE SAME LIBERALS WHO CLAIM THAT THEY DO NOT WANT TO TAKE AWAY ALL GUNS WHILE LITERALLY WRITING ARTICLES PROMOTING A GUN LAW THAT NOT ONLY INCLUDED GUN CONFISCATION BUT ALSO BANNED PURCHASING GUNS FOR USE IN SELF-DEFENSE!”

Another recent article published in the mainstream press, this time by CNN, spoke of dreaming of disarming all Americans while calling for banning all guns “once and for all”.

The article, written by liberal poet and Middlebury College professor Jay Parini, was a perfect example of how on one hand gun control advocates and their media allies tell the public that they only want “common sense” reform while on the other they are pushing for a full-scale ban.

Parini gets to the crux of his and the many who share his views on the lefts agenda which is the confiscation of millions of legally owned firearms under the threat of government attack and subsequent outlawing of all handguns and rifles.

Let me dream for a moment: I would much prefer to live in a country where only hunters who pass appropriately strict tests for mental competence and a knowledge of gun safety can still acquire rifles that are appropriate for hunting.

Handguns and assault rifles would be banned, period.

Banned. Period. There you have it folks, CNN letting a hard left authoritarian use their platform to “dream” about disarming America. It gets worse.

So let’s get rid of guns in this country, once and for all, making it a felony to possess a handgun or assault rifle. Over a period of years, illegal guns will gradually disappear. Guns don’t kill people, as they say.

People who acquire guns — legally or illegally — do. And we should make it extremely difficult for them to get their hands on these weapons.

LIBERAL MEDIA NOW PUSHING FOR GUN OWNERS TO BE SHOT

Not only are the mainstream media and gun control advocates pushing for a mass confiscation plan in the United States, they are also making it clear that they have no problem with gun owners being shot which would be a likely and obvious outcome if the government decided to outlaw millions of firearms overnight.

Just days ago, author and Coppin State University writing teacher D. Watkins published an article on the prominent hard left news outlet Salon.com that called for all gun owners to be shot if they wanted to use their 2nd Amendment right.

“Starting out the article with the writers dreams of charging five thousand dollars per bullet, Watkins then makes his position on gun ownership in America startlingly clear.” (emphasis mine)

Rock was definitely on point, $5000 bullets would be great but I’d take it a step further––I believe that being shot should be requirement for gun ownership in America. It’s very simple. You need to have gun, like taking selfies with pistols, can’t live with out it? Then take a bullet and you will be granted the right to purchase the firearm of your choice.

If we could successfully implement this rule, I guarantee the mass shootings will stop. Watching cable news now in days makes me physically ill.

Week in and week out we are forced to learn about another coward, who can’t stand to deal with the same rejection that most of us face–– so they strap themselves with guns and then cock and spray at innocent people. Heartbroken survivors and family member images go viral, as our elected officials remain clueless.

So there you have it. A court has upheld a New York law that paves the way for mass confiscation in America while at the same time the mainstream media is pushing this plan for confiscation and making it clear that if gun owners have to be shot to achieve this agenda then so be it.

The one question that remains is whether or not the American people will stand by as their 2nd Amendment right is openly destroyed right before their very eyes.

Alex Thomas is a reporter and opinion journalist who has worked in the alternative media for over three years. His work has been featured on numerous news outlets including Infowars and RT. You can contact him here. Alex is an exclusive weapon of Intellihub. Read more articles by this author here.