A widow in India is being remembered following her death from a heart attack for her bold faith — a faith that led her to help numerous women in jail — including one of her guards — find freedom in Christ.
Vani, a 31-year-old mother of an 8-year-old daughter, spent 15 days in jail roughly 10 months ago for sharing her faith.

During her time in jail, Vani shared her faith with more than 70 women — 14 of whom became Christians. Even her jailer encouraged her to continue sharing her faith after witnessing a dramatic change in several other prisoners who accepted Jesus.
“She was really sweet,” said a VOM field worker who met with Vani earlier this year. “She had a lot more wisdom than her age suggested.”

Vani
Vani was jailed after being charged with kidnapping and forcing a child to convert to Christianity. She also was charged in connection with an incident when she helped a teenager and introduced her to other believers. Vani was arrested after the girl’s parents reported her to police.
While in jail, she stayed in a small, windowless cell with about 30 other women, all of whom slept on their own simple mat on the cell’s concrete floor. Vani prayed and read from the Scriptures daily during the jail’s recreational time in its courtyard. She also baptized the new believers in jail.

“She was always telling the girls, ‘If you have a problem, just pray and God will help you,’” a VOM field worker said.

During her time in jail, Vani became a motherly figure to other women. At one point, a girl asked Vani to pray with her. The two prayed and Vani told her, “Today, you will get bail.” The girl later learned her case had been dismissed. Another girl had a 10-year sentence. Vani prayed with her for 12 days and the girl was released.

Following her release, Vani would return to the jail every two months for a regular court appearance. She’d bring snacks and use the afternoon to pray for the police officers and women at the jail. The jailer would even allow her to return to the jail’s courtyard to pray and read from her Bible. One guard came to faith and invited Vani to her house to pray for her.
Vani, who continued to visit those in jail until her death, shared her faith during a time when Christian women increasingly face persecution in India.

According to the Evangelical Fellowship of India’s 2013 persecution report, the most shocking trend of that year was the rise of anti-Christian violence against women.

Vani’s faith represented the joy the Book of James asks us to find in the midst of our trials.

“Everything that happened this year, it is good because it is taking me very near my God,” Vani told a VOM worker in January.

Her favorite Bible verse was Philippians 4:6–7, which states “Be anxious for nothing, but in everything by prayer and supplication, with thanksgiving, let your requests be made known to God; and the peace of God, which surpasses all understanding, will guard your hearts and minds through Christ Jesus.”

“Vani said, ‘If I go anywhere, the Bible is always with me,’ and it always was,” a VOM field worker said. “When you saw her with a Bible, you saw a joy on her face.” 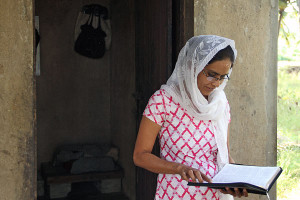 During her time in jail, VOM helped Vani with her bail, rent, her daughter’s school fees and in other ways. VOM is currently assessing ways it can continue to assist her daughter following Vani’s death.
Sources: VOM Sources