Previous Next
I don’t hate Muslims. I hate Islam

‘I don’t hate Muslims. I hate Islam,’ says Holland’s rising political star
Geert Wilders, the popular MP whose film on Islam has fuelled the debate on race in Holland, wants an end to mosque building and Muslim immigration. Ian Traynor met him in The Hague 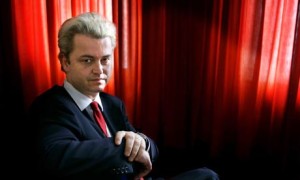 A TV addict with bleached hair who adores Maggie Thatcher and prefers kebabs to hamburgers, Geert Wilders has got nothing against Muslims.

He just hates Islam. Or so he says.

‘Islam is not a religion, it’s an ideology,’ says Wilders, a lanky Roman Catholic right-winger, ‘the ideology of a retarded culture.’

The Dutch politician, who sees himself as heir to a recent string of assassinated or hounded mavericks who have turned Holland upside down, has been doing a crash course in Koranic study.

Likening the Islamic sacred text to Hitler’s Mein Kampf, he wants the ‘fascist Koran’ outlawed in Holland, the constitution rewritten to make that possible, all immigration from Muslim countries halted, Muslim immigrants paid to leave and all Muslim ‘criminals’ stripped of Dutch citizenship and deported ‘back where they came from’.

But he has nothing against Muslims. ‘I have a problem with Islamic tradition, culture, ideology. Not with Muslim people.’
Wilders has been immersing himself in the suras and verse of seventh-century Arabia. The outcome of his scholarship, a short film, has Holland in a panic. He is just putting the finishing touches to the 10-minute film, he says, and talking to four TV channels about screening it.

‘It’s like a walk through the Koran,’ he explains in a sterile conference room in the Dutch parliament in The Hague, security chaps hovering outside.

‘My intention is to show the real face of Islam.

I see it as a threat.

I’m trying to use images to show that what’s written in the Koran is giving incentives to people all over the world. On a daily basis Moroccan youths are beating up homosexuals on the streets of Amsterdam.’

Wilders is lucid and shrewd and the provactive soundbites trip easily off his tongue. He was recently voted Holland’s most effective politician. If 18 months ago he sat alone in the second chamber or lower house in The Hague, his People’s Party now has nine of 150 seats and is running at about 15 per cent in the polls. His Islam-bashing seems to be paying off. And not only in Holland. All across Europe, the new breed of right-wing populists are trying to revive their political fortunes by appealing to anti-Muslim prejudice.
A few months ago the Swiss People’s Party of the pugnacious billionaire Christoph Blocher won a general election while simultaneously running a campaign to change the Swiss constitution to ban the building of minarets on mosques. Last month in Antwerp, far-right leaders from 15 European cities and from political parties in Belgium, Germany and Austria got together to launch a charter ‘against the Islamisation of western European cities’, reiterating the call for a mosque-building moratorium.

‘We already have more than 6,000 mosques in Europe, which are not only a place to worship but also a symbol of radicalisation, some financed by extreme groups in Saudi Arabia or Iran,’ argued Filip Dewinter, leader of Belgium’s Flemish separatist party, the Vlaams Belang, who organised the Antwerp get-together.

‘Its minarets are six floors high, higher than the floodlights of the Feyenoord soccer stadium,’ he said of a new mosque being built in Rotterdam. ‘These kinds of symbols have to stop.’
Where a few years ago the far right in Europe concentrated its fire on immigration, these days Islam is fast becoming the most popular target. It is a campaign that is having mixed results. In Switzerland, the Blocher party has been highly successful. In Holland, Wilders is thriving by constantly poking sticks in the eyes of the politically correct Dutch establishment. But when Susanne Winter ran for a seat on the local council in the Austrian city of Graz last month by branding the Prophet Muhammad a child molester, she lost her far-right Freedom Party votes.

For the mainstream centre-right in Europe, foreigner-bashing is also backfiring. Roland Koch, the German Christian Democrat once tipped as a future Chancellor, wrecked his chances a fortnight ago by forfeiting a 12-point lead in a state election after a campaign that denounced Muslim ritual slaughter practices and called for the deportation of young immigrant criminals.

Wilders echoes some of the arguments against multiculturalism that have convulsed Germany in recent years. Like many on the traditional German right, he wants the European Judaeo-Christian tradition to be formally recognised as the dominating culture, or Leitkultur.

‘There is no equality between our culture and the retarded Islamic culture. Look at their views on homosexuality or women,’ he says.

But if Wilders shares positions and aims with others on the far right in Europe, he is also a very specific Dutch phenomenon, viewing himself as a libertarian provocateur like the late Pim Fortuyn or Theo van Gogh, railing against ‘Islamisation’ as a threat to what used to be the easy-going Dutch model of tolerance.

‘My allies are not Le Pen or Haider,’ he emphasises. ‘We’ll never join up with the fascists and Mussolinis of Italy. I’m very afraid of being linked with the wrong rightist fascist groups.’ Dutch iconoclasm, Scandinavian insistence on free expression, the right to provoke are what drive him, he says.

He shrugs off anxieties that his film will trigger a fresh bout of violence of the kind that left Van Gogh stabbed to death on an Amsterdam street and his estranged colleague Ayaan Hirsi Ali in hiding, or the murderous furore over the Danish cartoons in 2005.
The Dutch government is planning emergency evacuation of its nationals and diplomats from the Middle East should the Wilders film be shown. It is alarmed about the impact on Dutch business. ‘Our Prime Minister is a big coward.

The government is weak,’ says Wilders. ‘They hate my guts and I don’t like them either.’
And if people are murdered as a result of his film? ‘They say that if there’s bloodshed it would be the responsibility of this strange politician. It’s almost a self-fulfilling prophecy. They’re creating an atmosphere. I’m not responsible for using democratic means and acting within the law. I don’t want Dutch people or Dutch interests to be hurt.’
But he does want to create a stir. ‘Islam is something we can’t afford any more in the Netherlands. I want the fascist Koran banned. We need to stop the Islamisation of the Netherlands. That means no more mosques, no more Islamic schools, no more imams… Not all Muslims are terrorists, but almost all terrorists are Muslims.’
Free speech or hate speech? ‘I don’t create hate. I want to be honest. I don’t hate people. I don’t hate Muslims. I hate their book and their ideology.’

For more than three years, Wilders has been paying for his ‘honesty’ by living under permanent police guard as the internet bristles with threats on his life. He has lived in army barracks, in prisons, under guard at home. ‘There’s no freedom, no privacy. If I said I was not afraid, I would be lying.’

There is little doubt that if Wilders’s film exists – and it’s shrouded in secrecy – and is broadcast, it will be construed as blasphemy in large parts of the world and may spark a new bloody crisis in relations between the West and the Muslim world.
He does not seem to care. ‘People ask why don’t you moderate your voice and not make this movie. If I do that and not say what I think, then the extremists who threaten me would win.’