‘Greatest constitutional document of all times’

Previous Next
‘Greatest constitutional document of all times’ 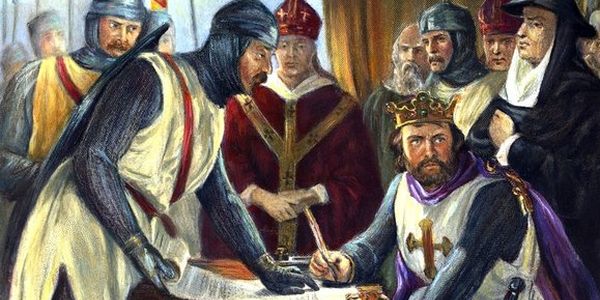 England was invaded by “Dane” Vikings from Scandinavia who destroyed churches, libraries and defeated all opposition except for 23-year-old King Alfred.

Forced into the swampy, tidal marshes of Somerset, Alfred, king of the Anglos and Saxons, began a resistance movement in 878 A.D. According to biographer Bishop Asser, “Alfred attacked the whole pagan army fighting ferociously in dense order, and by divine will eventually won the victory.”

Alfred drove the Danes back to England’s coastal area of East Anglia, where he gave their King Guthrum the choice of sailing back to Scandinavia or converting to Christianity. He chose the latter.

Afterwards, King Alfred the Great wrote his Law Code, drawing from as far back in history as:

King Alfred the Great, who began the University of Oxford, included in the preface to his Law Code the Ten Commandments, parts of the Book of Exodus, Christ’s Sermon on the Mount and the Acts of the Apostles.

King Alfred wrote: “These are judgments which Almighty God Himself spoke to Moses and commanded him to keep. Now, since the Lord’s only begotten Son our God and healing Christ has come to Middle Earth (the Mediterranean world) He said that He did not come to break nor to forbid these commandments but to approve them well, and to teach them with all mild-heartedness and lowly-mindedness.”

King Alfred’s Law is considered the basis for English Common Law as it contained concepts such as liberty of the individual family and church, a decentralized government and equal justice for all under the law: “Doom very evenly! Do not doom one doom to the rich; another to the poor! Nor doom one doom to your friend; another to your foe!”

Winston Churchill wrote in his Nobel Prize-winning book, “A History of the English Speaking Peoples” (1956, vol. 1): “King Alfred’s Book of Laws … as set out in the existing laws of Kent, Wessex, and Mercia, attempted to blend the Mosaic code with Christian principles and old Germanic customs.”

Around the year 911 A.D., on the opposite side of the English Channel, “Norse” Vikings, called “Normans,” invaded an area that came to be called Normandy, in northern France. The Normans eventually became Christians.

In 1066, the Norman king, William the Conqueror, crossed the English Channel and invaded England. He replaced King Alfred’s law with a feudal system of government which concentrated power into the hands of the king. This continued in England till the Magna Carta.

While England’s King Richard the Lionheart was away fighting the Muslims in the Third Crusade, his brother John was left in charge. The legend of Robinhood is considered to have originated during this time period.

Richard the Lionheart returned to England in 1192, but was killed in 1199, leaving King John to rule.

Though the Normans had originally come from Normandy over a century earlier, King John lost Normandy and almost all the other English possessions to King Philip II of France by 1205. England’s barons became so frustrated by this loss and by King John’s absolute and arbitrary power that they surrounded him on the plains of Runnymede. There they forced him to sign the Magna Carta, the great charter of English liberties, on June 15, 1215.

British judge, Lord Denning, described the Magna Carta as “the greatest constitutional document of all times – the foundation of the freedom of the individual against the arbitrary authority of the despot.”

The Magna Carta limited the unbridled centralized power of the king. It began the process of redefining government’s purpose from dominating people’s lives into guaranteeing individual rights, culminating in the U.S. Constitution.

The Magna Carta, Clause 1: “the English Church shall be free, and shall have its rights undiminished, and its liberties unimpaired” is reflected in the First Amendment: “Congress shall make no law respecting an establishment of religion, or prohibiting the free exercise thereof.”

The Magna Carta, Clause 6: “If we, our chief justice, our officials, or any of our servants offend in any respect against any man … and the offense is made known to four of the said twenty-five barons, they shall come to us – or in our absence from the kingdom to the chief justice – to declare it and claim immediate redress” is reflected in the First Amendment: “and to petition the Government for a redress of grievances.”

The Magna Carta, Clause 12: “No scutage (tax) nor aid … shall be imposed on our kingdom, unless by common counsel of our kingdom” is reflected in the the Revolutionary phrase, “No taxation without representation” and the Declaration of Independence, “deriving their just powers from the consent of the governed.”

The Magna Carta, Clause 13: “We also will and grant that all other cities, boroughs, towns, and ports shall enjoy all their liberties and free customs” is reflected in the U.S. Constitution, Article IV, Section 1: “Full faith and credit shall be given in each State to the public Acts, Records, and judicial Proceedings of every other State” and Article IV, Section 2: “The citizens of each State shall be entitled to all Privileges and Immunities of Citizens in the several States.”

The Magna Carta, Clause 20: “For a trivial offence, a free man shall be fined only in proportion to the degree of his offence, and for a serious offence correspondingly, but not so heavily as to deprive him of his livelihood” is reflected in the Eighth Amendment: “Excessive bail shall not be required, nor excessive fines imposed, nor cruel and unusual punishments inflicted.”

The Magna Carta, Clause 28: “No constable or other bailiff … shall take corn or other provisions from anyone without immediately tendering money” is reflected in the Fifth Amendment: “nor shall private property be taken for public use, without just compensation.”

The Magna Carta, Clause 38: “No official shall place a man on trial upon his own unsupported statement, without producing credible witnesses to the truth of it” is reflected in the Sixth Amendment: “In all criminal prosecutions, the accused shall enjoy the right … to be confronted with the witnesses against him.”

The Magna Carta, Clause 40: “To no one will we sell, to no one deny or delay right or justice” is reflected in the Sixth Amendment: “In all criminal prosecutions, the accused shall enjoy the right to a speedy and public trial.”’

The U.S. Supreme Court wrote in Bank of Columbia v. Okely, 17 U.S. 235, 244 (1819): “The words from Magna Carta … were intended to secure the individual from the arbitrary exercise of the powers of government, unrestrained by the established principles of private right and distributive justice.”

In over 100 U.S. Supreme Court decisions, the Magna Carta is referenced regarding due process of law, trial by jury of one’s peers, the importance of a speedy and unbiased trial and protection against excessive bail or fines or cruel and unusual punishment.

Justice William J. Brennan, Jr., stated in a rededication address to the American Bar Association’s Memorial to the Magna Carta (19 Loy. L.A. L. Rev. 55, 1985): “The Magna Carta, in Bryce’s words, ‘was the starting point of the constitutional history.’ … Throughout the 196 year history of the Supreme Court of the United States, the bedrock principles of the Magna Carta have had and continue to have, a profound influence over the Justices’ deliberations.”

The Magna Carta ends: “… for the salvation of our souls, and the souls of all our … heirs, and unto the honor of God.”

(To read the rest of Bill Federer’s column on the background of the Third Crusade and its relevance on the Magna Carta, click here.)

Brought to you by AmericanMinute.com.