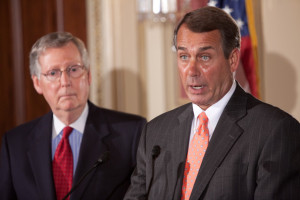 WASHINGTON – The next president likely will be a Democrat and she, or he, can thank GOP leadership for that, according to Michele Bachmann.
The former congresswoman told WND that will be the result of top Republicans allowing the bill funding Obama’s amnesty for five million illegal immigrants to pass, immediately following the speech to Congress last week by Israeli Prime minister Benjamin Netanyahu.

“Practically, that bill ensures a Democrat likely will be elected president in 2016 with the Congress willing to double cross the taxpayers by paying for five million illegal work permits, driver’s licenses, Social Security numbers, Medicare, Medicaid and ultimately fraudulently directed efforts to get illegal aliens to the 2016 voting booth.”
She said GOP leaders “betrayed our trust with a real bait-and-switch because no one was running in favor of amnesty in November, and then we get this.”
Bachmann lamented, “We’ve come to expect to be disappointed by Democrats,” but it was especially disappointing to see her own party flip-flop, and she predicted disastrous results.

“This was the most consequential vote for Democrats to ensure their political party’s dominance into the future.”
Bachmann said the GOP leadership “knew the outcome of the vote would be to pay for Obama’s illegal, unconstitutional work permits for non-deported illegal aliens.”

She said Democrats fully realized the vital importance and self-interest in voting for the bill, because, “They saw five million potential new voters for the all important 2016 election.”
But, didn’t Democrats assure Americans that illegal immigrants would not be able to vote?

“With Social Security numbers, a work permit and a driver’s license, they know no one doing voter registration would ever ask for legalization papers, because in light of Ferguson, that request would be construed as racist,” Bachmann retorted.

“The GOP just paid for the Democrats’ 2016 get-out-the-vote campaign.”
Meet the REAL Michele Bachmann – $4.95 today only! Find out why she’s a hero to so many conservatives.
Politico reported last week how House Speaker John Boehner, R-Ohio, had to turn to House Minority Leader Nancy Pelosi, D-Calif., to deliver the votes to fund Obama’s amnesty. The paper reported the two held quiet rounds of negotiations and maneuvering to push the measure through the House over the objections of conservatives.
Breitbart even reported Boehner and Pelosi made a “deal to use the hoopla around Israeli Prime Minister Benjamin Netanyahu’s Tuesday address to Congress over Iran’s nuclear ambitions as political cover to sneak in the extraordinarily controversial vote.”
“Only the leaders know whether there was a secret deal,” Bachmann cautioned, while adding, “But they’ve given the appearance of pushing this wildly unpopular vote under the cover of a wildly popular speech by a wildly popular leader, Netanyahu.”

Israeli Prime Minister Benjamin Netanyahu speaks to Congress on March 3, 2015
The former congresswoman said there was no news space available to talk about amnesty for illegals while Boehner was either praised or criticized in the press for giving what she called the “voice of sanity” a platform in the well of the House of Representatives that day.
“Boehner was loved by conservatives that day, then after the fact, vilified. Why? Because Boehner never would have scheduled the amnesty vote the week before the November election.”
Bachmann was incensed and made a point that few political consultants would likely dispute.
“Would they have held this vote on the eve of the election in November 2014?
“Would Boehner have won with his historic numbers? Would McConnell have had the gavel had this vote occurred prior to the first Tuesday in November?
“Never in a thousand joint sessions of Congress.”
And why did she make her first trip back to Washington from Minnesota since leaving Congress in January?
She wanted to be in the House chamber to see Netanyahu’s historic speech in person. And she experienced a special moment. A few of them, in fact.
“It was a thrill to be the first person he spoke with when he entered the chamber and one of the last when he left.”
Bachmann went back to Washington “specifically as a show of support for the prime minister, to demonstrate my stance for Israel, but primarily to be a first-person witness to the world hearing the truth of Obama’s purposefully negotiated bad deal that will ‘pave the way’ for a nuclear Iran.”
She called that Tuesday a historic day, in more than one respect.
“The truth was on display twice that day. First, as told by Netanyahu, and, second, as carried out by Boehner, Pelosi and all the Democrat House members with the assistance of 75 GOP House members.”
Why would so many Republicans, including leadership, do such a dramatic flip-flop on opposing amnesty?
“The truth is, they wanted to pay off their political debts to their multinational corporate funders. That’s their first allegiance, not us.”
And what did she take away from her first time back in Washington since leaving office?
“Let’s never forget how the ruling class of D.C. sold out American jobs, American wages, American benefits and American sovereignty.”
Follow Garth Kant @DCgarth

Strong Delusion:World Wants to Topple Party That Is Trying to Save the Worl... ‘Muslim Brotherhood princess’ used Clinton email server
Scroll to top