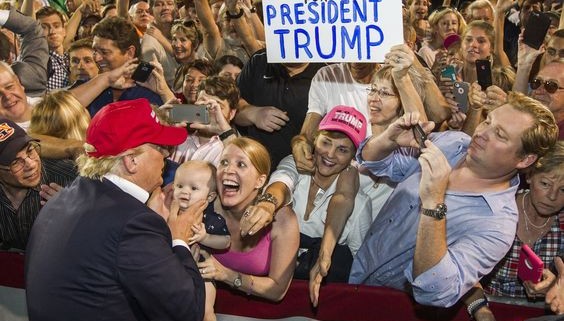 To say that evangelical is a loaded word would be an understatement. In American media, it means something political. In popular culture, it means something hateful and narrow-minded. In classical Christian tradition, it means to practice and share (evangelize) about your faith in God. But because of the broadness with which the word is thrown around these days, affiliation with the word has become problematic for many people who call themselves Christians. (I don’t think I even need to tell you, but I didn’t get the job.)

When the woman in the job interview asked, “Is it like…evangelical?” I knew what she was really asking. Do you hate gay people? Are you racist? Do you think I’m a sinner and should be sent straight to Hell? Are you a republican? And the most timely assumption of the hour: Do you support Donald Trump?

If I hadn’t wanted the job so much and felt the need to stay agreeable and professional, I would’ve taken the time to tell her about who I really am, contrary to her media-and-culture-influenced idea of who I am. I’m a person whose life was changed by Jesus Christ at 16-years-old. When I look back on that time in my life, the one thing I see is the full picture of the Jesus I fell in love with. And he looks nothing like the Christians I see on TV and on Facebook, angrily proclaiming allegiance to Donald Trump.

This Buzzfeed article, (hold mouse over “this Buzzfeed article” and click on url below) featuring photos of Trump supporters telling the camera what they are convinced will happen to this country if Trump isn’t elected drew up deep fear inside me. These people claim to represent Jesus by their political leaning. They claim to be mouthpieces for disenfranchised Christians in America. They hear racist, sensationalist, blanket statements about people groups and they cheer. They hear their leader tell them to be physically violent with anyone who disagrees with them and they obey. Who wouldn’t be filled with fear, watching all of this occur in the 21st century? This is the unbelievable kind of stuff I’ve watched so many times in WWII documentaries. It feels so foreign and of-another-time. But it is happening today. And it’s terrifying.

As I flipped through the photos of Trump supporters and read their statements, it was painfully obvious to me that many of them are acting on fear. Fear that, “the country will go to shit,” or “the country will be filled with Hillary Clinton clones,” or “our freedoms will disappear” or “education will get worse”. These statements seemed so general to me. So broad. Almost like empty slogans. In the same way that Trump’s promises are big and fantastical, the fears his supporters seem to be drowning in are sensational and dramatic.

Throwing your support behind a man who incites fear, promotes racism, encourages violence, and asks for continual personal allegiance to his personhood rather than his proposed good work, seems to me like the strangest move for a Christian to make. Bowing to feelings of pressure from Christian culture to simply vote for the most conservative candidate to protect your personal freedoms is no longer a worthy strategy. That strategy is based in fear and close-mindedness, and disregards people groups who I believe Christ would have us be loving servants to. Let us not be self-focused but others-focused and see people through God’s eyes.

All the while, there are many Christians like myself who are confused by the fandemonium for Trump within our religion. We’re starting to stand up and say, “This is not Christianity. These people don’t represent our faith.” In the same way, many Muslim people have been pointing at radical terrorists and saying, “This is not Islam. These people don’t represent our faith.” We can’t let fear mold our understanding of people groups. It’s happening far too often in our world and if we need any evidence of where that kind of thinking can lead us, it’s Donald Trump’s run for presidency.

Fear is not from God. And Donald Trump is a fearmonger. 2 Timothy 1:7 reads, “For God gave us a spirit not of fear but of power and love and self-control.” In Christ, we have self control, we have the power to make our own decisions, to love recklessly, and to oppose fear in any form. So, when we operate based on abstract fears of the future, we forfeit that freedom and become slave to a flawed human leader.

There’s this old Steven Curtis Chapman song called, “Heaven in the Real World”, that I’ve been thinking about since the political landscape has been getting so dark and dirty over the past year. It opens with a snippet from a Billy Graham message where he says, “We feel demoralized by the decay around us. Where is the hope? The hope that each of us has is not in who governs us or what laws are passed or what great things we do as a nation. Our hope is in the power of God working through the hearts of people. And that’s where our hope is in this country, and that’s where our hope is in life.”

Even though Donald Trump, his supporters, and the picture they’re painting of Christianity and evangelicalism for the world to see makes me scared as hell, I’m choosing to reject fear and rest calmly in the hope that we have in Jesus–that no matter what happens, he is still in control. I’m choosing to trust that he will not leave us or forsake us. And he’ll continue to teach all of us how to love.

It’s going to be a long and terrifying road to November. I’m praying that Christians find it within themselves to rest in God’s peace, to learn to see people through God’s eyes and not Donald Trump’s, to seek God’s wisdom, to place their faith and trust in God and not in government, and to most importantly–reject fear. It isn’t from God.

Wilders: Islamization of Europe Can Happen in America – World –...