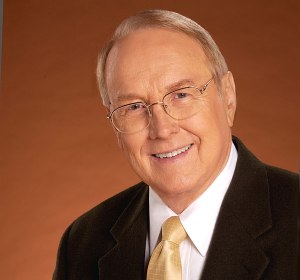 Dr. James Dobson, who founded the highly influential groups Focus on the Family and Family Research Council and now runs Family Talk Radio, is warning that if the U.S. Supreme Court redefines marriage as analysts predict, the ruling will presage the “fall of Western civilization.”

“I do not recall a time when the institutions of marriage and the family have faced such peril, or when the forces arrayed against them were more formidable or determined,” he writes in a letter distributed to his hundreds of thousands of supporters.

“Barring a miracle, the family that has existed since antiquity will likely crumble, presaging the fall of Western civilization itself. This is a time for concerted prayer, divine wisdom and greater courage than

“I believe in the rule of law, and it has been my practice since I was in college to respect and honor those in authority over us. It is my desire to do so now. However, this assault on the sanctity of human life takes me where I cannot go,” he wrote in an open letter to the president.

“I WILL NOT pay the surcharge for abortion services. The amount of the surcharge is irrelevant,” he said. “To pay one cent for the killing of babies is egregious to me, and I will do all I can to correct a government that lies to me about its intentions and then tries to coerce my acquiescence with extortion. It would be a violation of my most deeply held convictions to disobey what I consider to be the principles in Scripture. The Creator will not hold us guiltless if we turn a deaf ear to the cries of His innocent babies. So come and get me if you must, Mr. President. I will not bow before your wicked regulation.”

WND also reported that when Dobson spoke to the National Day of Prayer in Washington, hundreds stood and cheered his condemnation of the abortion-funding plan, now defeated multiple times in U.S. courts.

What do YOU think? What will be result of legalizing same-sex marriage? Sound off in the WND Poll!

His newest comments were written for distribution to constituents of the organization he founded after leaving Focus on the Family in 2003, Family Talk, which features the daily radio show “Family Talk with Dr. James Dobson.”

“We … are not simply ‘slouching toward Gomorrah,’ as Judge Robert Bork warned in his best-selling book; we are hurtling toward it,” he writes. “The old earthen dam that has held and protected the reservoir of Judeo-Christian values since the days of our Founding Fathers has given way.”

If the Supreme Court redefines marriage, he says, “an avalanche of court cases will be filed on related issues that can’t even be imagined today.”

Religious liberty “will be assaulted from every side.”

“You can be certain that conservative churches will be dragged into court by the hundreds,” Dobson writes. “Their leaders will be required to hire people who don’t share the beliefs of their denominations and constituents. Pastors may have to officiate at same-sex marriages, and they could be prohibited from preaching certain passage of Scripture. … Prison is also a possibility.”

He says Christian businesses and ministries, as already has happened to florists and bakers, will be forced to serve at same-sex ceremonies, and Christian colleges “may be unable to teach scriptural views of marriage.”

WND has compiled a “Big List of Christian Coercion” with dozens of cases in which Christians have been fined, threatened or penalized for recognizing the biblical definition of marriage.

Many organizations and companies endorsing traditional and biblical marriages will simply be shut down.

“Consider an editorial published in the New York Times a few weeks ago,” Dobson writes. “It was written by liberal columnist, Frank Bruni, who insisted that Christians must be ‘made’ to change their church doctrines on sexual morality. He actually wrote, ‘Church leaders must be made to take homosexuality off their sin list.’”

A petition has been created in support of ordinances that allow Christian business owners to live by their faith.

A foreshadowing can be seen in Obama’s recent demand for laws that prevent parents from seeking professional therapy if their children are dealing with a sexual identity crisis. Already law in a couple of states, Obama’s plan would require counselors to accept homosexuality in all such cases.

“What business does this man have telling parents how to help their confused and disoriented kids even after they have been abused and exploited sexually? This is outrageous!” Dobson says.

Also, anyone with a state license soon could be coerced into adopting the state definition of morality.

Textbooks would be rewritten, and public schools soon would teach children “gay and lesbian concepts.”

All of which, he writes, defies the facts of marriage. “The institution of the family is one of the Creator’s most marvelous and enduring gifts to humankind. It was revealed to Adam and Eve in the Garden of Eden and then described succinctly in Genesis 2:24, where we read, ‘For this cause, a man shall leave his father and mother and cleave to his wife, and they shall be one flesh.’ With those 20 words, God announced the ordination of male-female marriage, long before He established the two other great human institutions, the church and the government,” he writes.

Every civilization has held to that understanding of marriage until now.

“God help us if we throw the divine plan for humankind on the ash heap of history,” he said. “Down one path are millions of strong and vibrant families with their children growing up in the fear and admonition of the Lord. Down the other path is a nation drifting away from its spiritual roots in a culture that will teach a dangerous ideology to today’s younger generation and those yet to come.

“Prayer is our only hope, but it is a powerful one. Even at this late hour, the Lord could still respond to the petitions of millions of godly people. Shirley and I are among those who are praying for a miracle. Will you join us?”

WND reported just days ago when Rabbi Jonathan Cahn, author of the New York Times bestseller “The Harbinger” and the inspiration behind the “Isaiah 9:10 Judgment” movie, smacked down the Supreme Court’s assumption that it even has the authority to redefine marriage.

Washington warned that the smiles of heaven can never be expected on a nation “that disregards the eternal rules of order and right which heaven itself hath ordained,” he said.

Cahn noted the Supreme Court opens sessions with the words, “God save the United States and this honorable court.”

See Jonathan’s Cahn’s message at Washington: Man of Prayer event at the Capitol.

In preparation for the court’s eventual ruling, thousands of Christians, including hundreds of leaders from organizations representing millions, have said civil disobedience is an option should the court’s opinion kill marriage.

The Marriage Pledge says: “We will view any decision by the Supreme Court [overturning traditional marriage] or any court the same way history views the Dred Scott and Buck v. Bell decisions. Our highest respect for the rule of law requires that we not respect an unjust law that directly conflicts with higher law.”

The petition was assembled by Keith Fournier, a Catholic deacon who is editor of Catholic Online, and Mat Staver, founder of Liberty Counsel.

“A decision purporting to redefine marriage flies in the face of the Constitution and is contrary to the natural created order. As people of faith we pledge obedience to our Creator when the state directly conflicts with higher law.

“We respectfully warn the Supreme Court not to cross this line.”

In Dred Scott, the Supreme Court said blacks are less than human, and in Buck, it ordered the government sterilization of innocent people.

The board of the National Hispanic Christian Leadership Counsel, which represents 40,118 evangelical Hispanic churches in America and about 500,000 in Latin America and Spain, on Tuesday voted to sign the Marriage Pledge, warning that a decision mandating same-sex marriage simply would not be accepted.

CatholicVote.org issued a statement: “Remember, no matter how the court decides this summer, the truth about marriage will never change.”

Pledge co-author Mat Staver wrote at Stream.org: “I argued that a bad court decision might require civil disobedience. I still pray that won’t be necessary. I pray the Supreme Court will allow states to recognize natural marriage. That would be a great victory for truth, but it would not end the fight. Neither the Supreme Court nor any state has the authority to redefine the natural created order of marriage. Marriage is no more a state’s rights issue than is slavery or the law of gravity.

“This is the red line we will not cross,” Staver wrote. “While no one wants this conflict, we have no choice but to resist an unjust law, particularly one that will force us to participate in acts that directly conflict with the Natural and Revealed Law.”

WND also reported longtime conservative leader Pat Buchanan urged Christians to fight the “LGBT fanatics” who are demanding they betray their faith, even if it means civil disobedience.

Of the 31 times voters have decided the issue of the definition of marriage, 31 times they have adopted the biblical definition. Among the three dozen states that recognize same-sex marriage today, not even a handful have adopted it voluntarily. In the majority of cases, it was a federal judge’s decision.

Walid Shoebat – Ex-Terrorist explains the real motivations behind the...
Scroll to top