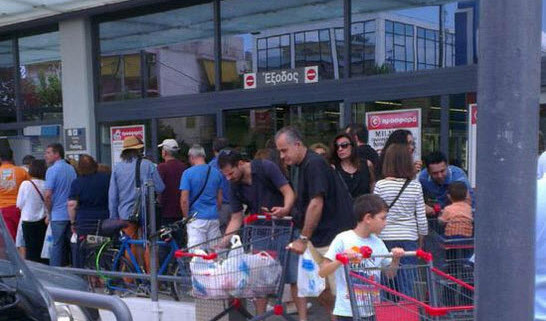 Coming To America: The Hoarding Begins: Greeks Rush To Grocery Stores, Gas Stations and ATMs In Anticipation of Collapse 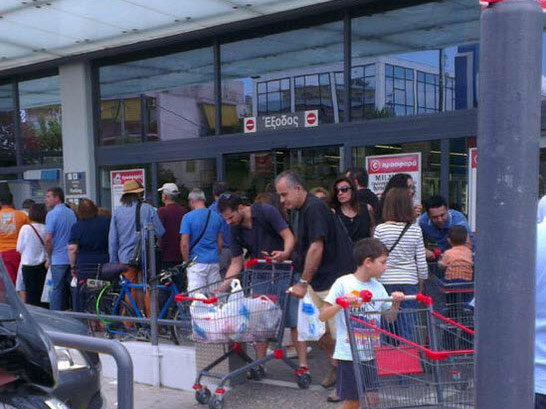 What happens when your country collapses to such an extent that it can no longer pay its debts, your banking system is bankrupt and the populace loses confidence in its government’s ability to mitigate the crisis?

The events taking place in Greece provide some insight and are a harbinger of things to come in America.

It was a seemingly normal Sunday — except it was anything but normal.

For many people in Athens, it was time to prepare for an approaching storm. A short walk from Plaka, a line of people waited to withdraw cash from an A.T.M., hours before the official announcement that banks would be closed starting on Monday. Some bank machines in central Athens had run out of money or were out of service, as screens blamed “technical difficulties.”

Elsewhere, some people had started hoarding gasoline and groceries. “We don’t know what the new day will bring,” said Katerina Vorreadi, who was among a group of retirees waiting in line outside the National Bank of Greece on Saturday night.

Uncertainty breeds panic and if there’s anything that will get people lining up at local venues that provide essential services like money exchange and foodstuffs, it’s the fear of not being able to acquire those items when they’re needed most.

And while some will argue that America is an advanced economy and Greece is not even on the same playing field, the fact is that as a country we are much worse off. In a country where nearly 100 million people are dependent on monthly government benefits just to survive, even a short-term financial shock could lead to widespread panic.

But how likely is such an event?

Well, according to Representative Brad Sherman, during the height of the 2008 crisis Congress was told that if taxpayer funds weren’t used to bail out the system to the tune of trillions of dollars that we would literally have tanks patrolling the streets of America.

Many of us were told in private conversations that if we voted against this bill on Monday, that the sky would fall, the market would drop two or three thousands points the first day, another couple thousand the second day, and a few members were even told that there would be martial law in America if we voted no.

It was a testament to just how bad things were and how much worse they could have gotten. But more importantly, it shows just how close to the brink of total collapse our nation was… and still remains.

Just this week the Bank of International Settlements – essentially the central bank for the world’s central banks – said that governments and banks will be unable to fight the next financial crisis because they used up their ammunition fighting the last one.

Keep in mind that these are the people that essentially control the monetary policy of the entire world. And they just said that once the next set of dominoes starts tipping over they aren’t going to be able to stop it.

So the reality of the situation is that not only is this contagion soon to reach America, there will be no stopping it when it does.

In his latest article Michael Snyder of End of the American Dream warns that Americans are woefully unprepared for such a scenario.

While over 70% of people fear an economic crisis is coming, only about 3% of Americans have actually taken steps to prepare for it.

Should America be faced with the same situation as Greece, we can fully expect similar results here. 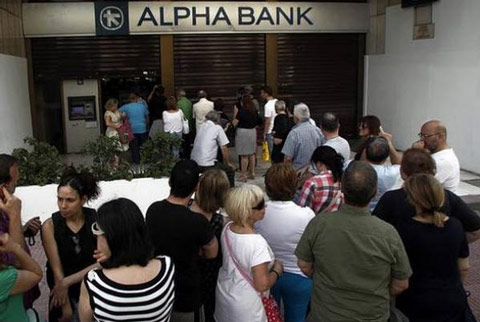 People will rush ATM’s in the hopes of getting cash, but like Greece, they’ll be met with restrictions allowing them to withdraw just $75 a day.

They’ll make their way to grocery stores hoping to buy a food supply for a week or two while things settle down, but they’ll be met with long lines and empty shelves, much like we’ve seen during previous emergencies.

And, just as we saw in the aftermath of Hurricane Sandy, within 72 hours of a destabilization of our systems of commerce people will be facing starvation and supply shortages.

Tess Pennington, author of The Prepper’s Blueprint, explains the four stages of a breakdown and notes that by day three, things get very dangerous:

3-5 days following a disaster is the bewitching hour. During this short amount of time, the population slowly becomes a powder keg full of angry, desperate citizens. A good example is the chaos that ensued in New Orleans following the absence of action from the local government or a timely effective federal response in the aftermath of Hurricane Katrina. In such troubled times, people were forced to fend for themselves and their families, by any means necessary. This timeline of Hurricane Katrina effectively illustrates “the breakdown,” and within three days, the citizens of New Orleans descended into anarchy, looting and murder (Source).

If this scenario isn’t bad enough, at the end of this time frame, there will be an increase in illnesses due to cramped living quarters from emergency shelters, sanitation-related illness,compromised water sourcesandexposure to natural elements. In the aftermath of the Haitian earthquake, sanitation- related epidemics became a large concern for the disaster victims. In fact, the outbreak erupted into the world’s largest cholera epidemic despite a huge international mobilization still dealing with the effects of the Jan. 12, 2010, earthquake.

Source: The Anatomy of a Breakdown

We can pretend like everything is peachy and that happy times are back again. But even a precursory look at what’s happening around the world suggests that the global economy is derailing. Greece has essentially collapsed (for the fourth time in a decade) and China’s stock markets are in the midst of detonating.

The situation remains fluid, but dire, because if China and Europe go, guess who’s next?

Americans aren’t ready for it. As Michael Snyder notes in his aforementioned article, most people don’t have any emergency cash, or even a three day supply of food on hand in case something happens.

Now, consider what happens when banks shut their doors for a week like they have done in Greece. Next, imagine a scenario where confidence in the U.S. dollar is lost and foreign creditors pull out.

The result is an intense, almost immediate collapse of the system as we have come to know it. When the debt bubble bursts, notes analyst Greg Mannarino, millions of people could die:

Millions upon millions of people are going to die on a world-wide scale when the debt bubble bursts. And I’m saying when not if…

When resources become more and more scarce we’re going to see countries at war with each other. People will be scrambling… in a worst case scenario… doing everything that they can to survive… to provide for their family and for themselves.

We could be wrong, of course. But what if we’re not?

Articles: America’s Destiny in the Balance