Carter and Obama: How to Fail at Foreign Policy | Frontpage Mag

Previous Next
Carter and Obama: How to Fail at Foreign Policy | Frontpage Mag

Who will win the title of worst foreign policy president? 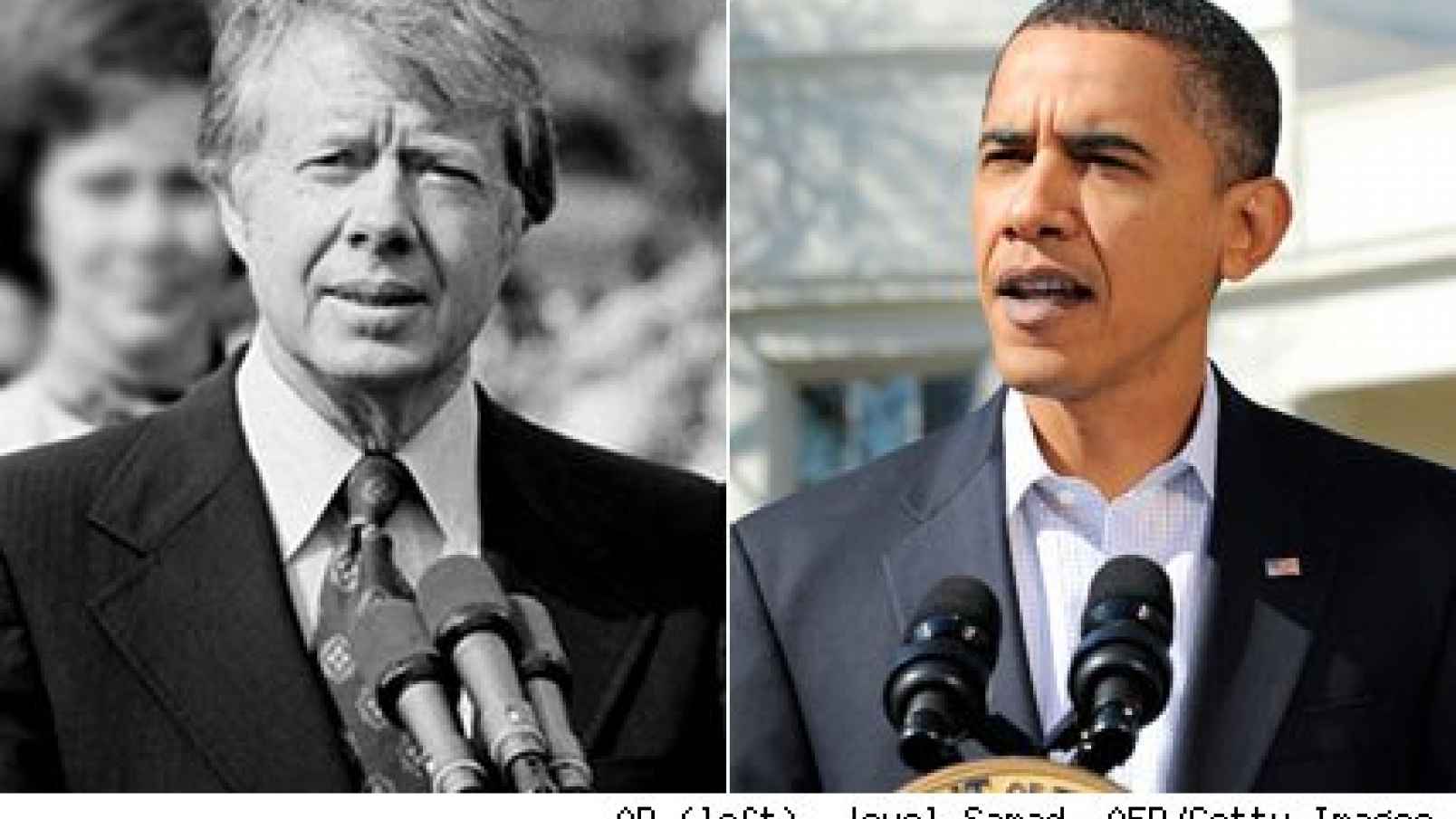 Jimmy Carter made news recently for criticizing Barack Obama’s foreign policy record. Asked about Obama’s “successes,” Carter said they were “minimal,” adding, “I can’t think of many nations in the world where we have a better relationship now than we did when he took over.” He continued, “We have not improved our relationship with individual countries and I would say that the United States [sic] influence and prestige and respect in the world is [sic] probably lower now than it was six or seven years ago.” Perhaps thinking of his own dismal record, Carter anxiously repeated, “I’m not saying it’s his fault.”

Carter may be secretly relieved that he no longer holds the title as worst foreign policy president ever, but Obama’s failures come from the same bad ideas as Carter’s did: a distrust of American power and influence, a skepticism about America as a force for good in the world, and a preference for diplomatic engagement predicated on a massive failure of imagination in understanding the motives and aims of our adversaries.

Carter’s inaugural address in 1977 was rife with self-doubt and guilt over America’s alleged sins abroad. He acknowledged the nation’s “recent mistakes,” an obvious reference to the war in Vietnam, which a few years later he would attribute to “intellectual and moral poverty.” He advised Americans not to dwell on “remembered glory,” and suggested that “even our great nation has its recognized limits” and can only “simply do its best.” In another speech that same year, he blamed our bad foreign policy behavior not just on hubris, but on an “inordinate fear of communism which once led us to embrace any dictator who joined us in that fear.” A few years later this tone of decline was reprised in the famous “crisis of confidence” or “malaise” speech. In short, in Carter’s eyes, America was an arrogant global bully that needed to accept the diminishment of the power it had abused for its own selfish ends.

In practice, this meant putting our faith not in maintaining America’s military power in order to deter our foes and protect our security and interests, but rather in “idealism” and “moral principles,” as Carter put it in his memoirs, and the pursuit of lofty aims such as promoting human rights and limiting the world’s armaments. Now our support of other countries would be predicated on their adherence to these utopian ideals, rather than on their usefulness in protecting America’s interests. Diplomacy and arms control treaties, along with cutbacks in American defense spending, were pursued as the means for achieving these boons. Many Americans no doubt felt righteous and redeemed by these policies, but abroad many countries began to doubt our commitment to vigorously containing communist aggression, and worried that in a world of violent aggressors, our support depended on their adherence to “moral principles” no matter how dangerous or inappropriate for their own security.

The bitter fruit of this posture of retreat was the feckless response to 1978-79 Iranian Revolution and the kidnapping of our embassy staff in November 1979. Iran’s geostrategic importance for the Cold War and the global economy was held hostage to Carter’s human rights idealism and a caricature of the Shah as a uniquely brutal, corrupt stooge of America’s neo-imperialist bullying. In truth, by the standards of the region, the Shah’s use of violence was not remarkable, and pales beside that of the mullahs who succeeded him, let alone his neighbors at the time. The result of Carter’s vacillating policy was the hostage crisis, in which a military pygmy humiliated the greatest power on earth, and the Soviet Union was emboldened by our manifest weakness and failure of nerve, starting a rampage of aggression and subversion in Latin America, Afghanistan, and central Africa.

Central to the Carter administration’s failure was an inability to understand the origins of the Iranian revolution. The minds of his foreign policy advisors were hostage to the Vietnam paradigm and its anticolonialist narrative of revolution justified by America’s neo-imperialist interference in other countries’ business, and its propping up of brutal dictators in order to serve our greedy capitalists. In reality, the Iranian revolution was a religious phenomenon, a response to the Shah’s modernization and secularization policies such as emancipating women and protecting minorities like Jews and Baha’is. The Ayatollah Khomeini, godfather of the revolution, made this clear in 1963 when he said the Shah’s regime was “fundamentally opposed to Islam itself and the existence of a religious class.” Carter’s advisors ignored or downplayed these religious motives, with consequences we are living with today.

Barack Obama has duplicated many of the same mistakes predicated on the same dubious ideas Carter embraced. Obama campaigned against the foreign policy record of George Bush, who had been caricatured by progressives as hubristic and unilateralist, a trigger-happy cowboy who disdained diplomacy and multilateralism, and who on false pretenses had dragged us into a Vietnam-like “quagmire” in Iraq. Like Carter, Obama promised to change course and restore our international standing through engagement and idealism. Writing in Foreign Affairs in 2007, he promised “to reinvigorate American diplomacy” and a “restoration of multilateralism and participation in international institutions” as the means for “dealing with long-standing adversaries such as Iran and Syria.” No need to ask how that’s working out.

Also like Carter, Obama sounded the notes of America’s sins and need for repentance. America should be a mere partner, Obama wrote, one “mindful of his own imperfections,” for “no one nation can or should try to dominate another nation.” In other words, no more American exceptionalism, no more belief in America as a force for freedom and global order, no more making American security and interests a priority. Obama continued this posture of self-doubt and guilt in his infamous “apology tour,” when contrary to history he predictably fingered “colonialism” as the root cause of the Middle East’s problems. In short, Obama believes that American military power must be distrusted, and American humility must be demonstrated so that our lofty ideals and “moral principles” will by mere example transform our enemies into peaceful “partners.” In reality, after six years of such idealism we have fewer “partners” in a world filled with more violence and more aggressors.

Obama’s failures reflect the same abiding sin that wrecked Carter’s foreign policy: assuming that our adversaries think as we do, and so respect the same principles and desire the same goals. Because we value peace, cooperation, and prosperity above everything else, we forget that other peoples instead prefer obeying God, restoring national honor, or expanding their power and influence. Because we prefer diplomatic words to violent deeds, we assume our adversaries do too, forgetting that for much of the world violence is an acceptable tool for achieving a people’s aims, and diplomatic engagement a tactic for misdirecting the enemy and buying time. Based on that mistaken assumption of universal goals, Obama’s “outreach” to Russia and Iran has been a dismal failure, one facilitated by a diplomatic engagement that has merely given our rivals the time and cover for achieving their aims. As a result, our standing in the world has declined, our allies are disheartened and disgusted, and our enemies are emboldened––just as they were in the 1970s after Carter’s weak and vacillating handling of the Iranian revolution and the hostage crisis.

Yet in one respect Carter is different from Obama. In response to the Soviet invasion of Afghanistan, in January 1980 Carter at least promulgated the “Carter Doctrine,” which declared, “An attempt by any outside force to gain control of the Persian Gulf region will be regarded as an assault on the vital interests of the United States of America, and such an assault will be repelled by any means necessary, including military force.” Carter also increased America’s naval presence in the region and laid the foundation for CENTCOM, our military presence in the region today.

Such a road-to-Damascus moment and reversal of course seem highly unlikely with Barack Obama. His dogged pursuit of a nuclear deal with Iran––in which he has serially appeased the world’s leading state sponsor of terror, fomenter of most of the violence in the region, and inveterate enemy with American blood on its hands––suggests that no matter how detrimental to the interests of ourselves and our allies, he will sign an agreement that will vastly increase Iran’s capacity to roil the region, spark nuclear proliferation, and finance more terrorism. And contrary to Jimmy Carter, it will indeed be his fault, as much as the disaster in Iran nearly 36 years ago is Carter’s. As Truman said, the foreign policy buck stops on the Commander-in-Chief’s desk.