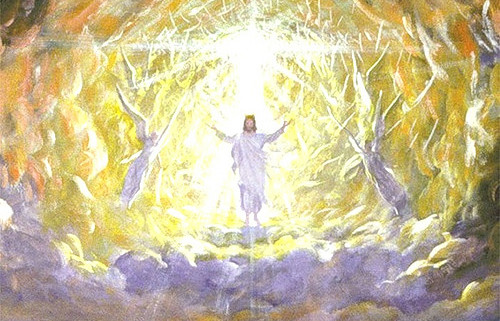 Joe Kovacs, author of the brand-new No. 1 best-seller, “The Divine Secret: The Awesome and Untold Truth About Your Phenomenal Destiny”, as well as the No. 1 best-seller “Shocked by the Bible: The Most Astonishing Facts You’ve Never Been Told,” is executive news editor for WND.More ↓
Total lunar eclipses often make the moon appear red

Will Jesus Christ return to Earth in the year 2015?

And can studying NASA’s website provide evidence for such a scenario?
A minister who promotes the Old Testament roots of Christianity suggests a rare string of lunar and solar eclipses said to fall on God’s annual holy days seven years from now could herald what’s come to be known as the “Second Coming” of Jesus.

In a video interview on the Prophecy in the News website, Biltz said he’s been studying prophecies that focus on the sun and moon, even going back to the book of Genesis where it states the lights in the sky would be “be for signs, and for seasons.”

“It means a signal, kind of like ‘one if by land, two if by sea.’ It’s like God wants to signal us,” he said. “The Hebrew word implies … not only is it a signal, but it’s a signal for coming or His appearing.”
Biltz adds the word “seasons” implies appointed times for God’s feasts and festivals.

“When we hear the word feast, we think food. But the Hebrew word has nothing to do with food. It has to do with a divine appointment, as if God has a day timer, and He says, ‘OK, I’m gonna mark the day and the time when I’m going to signal My appearance.’”

Yes, the Bible is completely true, but you may never have heard the spectacular, ultimate destiny God has in store for you. It’s far more glorious than just floating around on clouds in heaven! Find out what you’ve never been told, direct from your very own Bible!

In the Old Testament, the prophet Joel states, “The sun shall be turned into darkness, and the moon into blood, before the great and the terrible day of the LORD come.” (Joel 2:31)

In the New Testament, Jesus is quoted as saying, “Immediately after the tribulation of those days shall the sun be darkened, and the moon shall not give her light … And then shall appear the sign of the Son of man in heaven: and then shall all the tribes of the earth mourn, and they shall see the Son of man coming in the clouds of heaven with power and great glory.” (Matthew 24:29-30)

Gary Stearman of Prophecy in the News noted, “When we think of the sun being darkened and the moon not giving her light, we usually think of some astronomical catastrophe – perhaps the sun sputtering and the moon being affected by all this. But maybe it’s time to rethink this a little bit and think of it as a natural cycle, the cycle of the eclipses.”

He noted a rare phenomenon of four consecutive total lunar eclipses, known as a tetrad.

He says during this century, tetrads occur at least six times, but what’s interesting is that the only string of four consecutive blood moons that coincide with God’s holy days of Passover in the spring and the autumn’s Feast of Tabernacles (also called Succoth) occurs between 2014 and 2015 on today’s Gregorian calendar.

“The fact that it doesn’t happen again in this century I think is very significant,” Biltz explains. “So then I looked at last century, and, believe it or not, the last time that four blood red moons occurred together was in 1967 and 1968 tied to Jerusalem recaptured by Israel.”

He then started to notice a pattern of the tetrads.

When checking the schedule for solar eclipses, Biltz found two – one on the first day of the Hebrew year and the next on the high holy day of Rosh Hashanah, the first day of the seventh Hebrew month. Both of these take place in the 2014-2015 year.
The sun’s corona becomes visible during a solar eclipse
Biltz says, “You have the religious year beginning with the total solar eclipse, two weeks later a total lunar eclipse on Passover, and then the civil year beginning with the solar eclipse followed two weeks later by another total blood red moon on the Feast of Succoth all in 2015.”

“If you think that this is a coincidence, I want you to know that it’s time!” exclaimed Prophecy in the News host J.R. Church. “There are no more of these for the rest of the century.”

The prospect of eclipses pinpointing the time of Jesus’ return is getting mixed reaction in Christian circles.

“I have just watched the program two times and do not think I have ever been more encouraged or excited about the soon return of the Lord!” Bramlett said.

But Hal Lindsey, a well-known biblical analyst and author of “The Late Great Planet Earth,” says while he hasn’t heard of Biltz’s theory, he called it “pure speculation.”

“In my 50-something years of studying prophecy, to me the greatest indication of the time of Christ’s return is based around the general things of prophecies coming together in the same time frame.”

He mentioned not only Israel’s birth as a political state in 1948, but the increase in tensions with Muslims, the rise of Russia, China and the European Union, which he says is even “calling itself the revived Roman Empire.”

“I see the whole sweep and panorama spinning together in a precise scenario,” he said.

During a second video interview, Biltz was presented with Bible quotes that many think suggest Jesus’ return will be a complete surprise, or at least not specifically known.

The 25th chapter of Matthew features a parable where Jesus likens His kingdom to ten virgins all waiting for the arrival of their bridegroom.

Jesus said in the story, “ye know neither the day nor the hour wherein the Son of man cometh.” (Matthew 25:13)

Biltz says people need to examine the quote in its proper context.

“When He says you don’t know the day or the hour, He’s speaking to the foolish virgins, not the wise virgins,” he explained.

Biltz was also asked about the famous statement in Matthew 24:36 when Jesus was discussing the signs of His “coming, and of the end of the world”: “But of that day and hour knoweth no man, no, not the angels of heaven, but my Father only.” (Matthew 24:36)

He responded by referring to the annual Feast of Trumpets holiday, saying Israelites never knew the precise moment it began, “because it was based on the sighting of the new moon.”

Church stressed despite the information suggesting 2015 could be a pivotal time, “We don’t know that that will be the concluding year of the tribulation period … so we’re not setting a date and saying this is a warning. We’re introducing the possibility of a watch.” —–
— http://www.wnd.com/2008/04/63076/