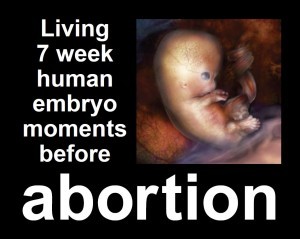 Today, the American Freedom Law Center filed a civil rights lawsuit against The Irvine Company, the owner of the Irvine Spectrum Center and Fashion Island, two large shopping centers located in Orange County, alleging that the Company violated California’s liberty of speech provision by banning anti-abortion signs that it claims were “gruesome.”  Under the California Constitution, large shopping centers are considered public forums for the right to free speech.

The lawsuit was filed on behalf of the Center for Bio-Ethical Reform, Inc. (CBR) and its Executive Director, Gregg Cunningham.  CBR is a nonprofit, social reform organization that makes extensive use of abortion imagery to promote its pro-life policy initiatives.

In December 2014, Cunningham sent a letter to officials at the Irvine Spectrum Center and Fashion Island, notifying them of CBR’s intent to conduct peaceful boycott picketing in close proximity to several targeted retail stores within the malls for the purpose of informing prospective customers that these companies permit business entities under their corporate control to donate money to Planned Parenthood, America’s largest abortion provider. 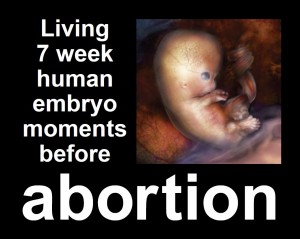 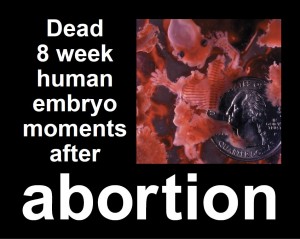 The Company rejected both signs, claiming that they were “gruesome” and thus not permitted pursuant to the Company’s rules on non-commercial expressive activity within its shopping centers.

As a result of these denials, CBR proposed a third sign that simply displayed a QR code that a viewer could scan with his or her smartphone in order to view an abortion video.  CBR intended to urge passersby to accept personal responsibility and watch the abortion video on their own — and those who declined would be asked “If abortion is too terrible to watch, should you give your money to businesses which support it?”  A copy of this sign appears as follows:

The Company rejected another sign as well, prompting the filing of the lawsuit, which seeks to vindicate CBR’s right under California’s liberty of speech clause to display anti-abortion signs.  As alleged in the complaint, a ban on “gruesome” images in the abortion context is ultimately a viewpoint-based restriction, which is the most egregious form of content discrimination under the law.

“Historically, many unjust laws were reformed only when activists exercised their right to confront society with irrefutable visual evidence of social injustice.  Photos make injustice more difficult to trivialize or ignore.  Indeed, abortion photos are informative in useful ways which no words can achieve.  Consequently, it is imperative that CBR’s right to display these images under the California Constitution’s liberty of speech clause be vindicated.”

“The right to freedom of speech is not a right to catharsis.  It is a right to meaningfully influence public debate in order to change public policy.  Throughout our nation’s history, social reform has often been achieved through the use of graphic pictures designed to dramatize injustice and prick the collective conscience of the culture.  These images were indispensable in changing public opinion at the levels necessary to create the political consensus required for social reform.