“And you will feel secure, because there is hope; you will look around and take your rest in security.” (Job 11:18) 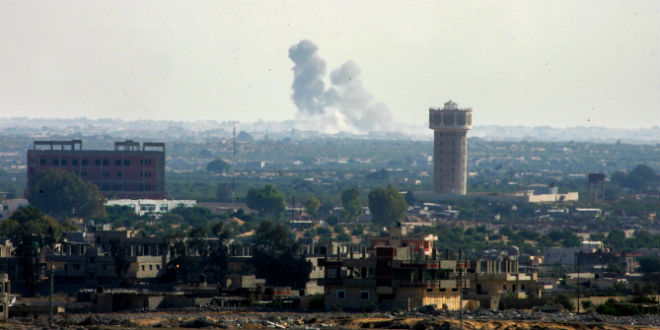 Smoke rises in Egypt’s North Sinai as seen from the border of southern Gaza Strip with Egypt on July 1, 2015. ISIS jihadists launched a wide-scale coordinated assault on several military checkpoints in Egypt’s North Sinai on Wednesday in which 70 people were killed, security sources said, the largest attack yet in the insurgency-hit province. (Photo: Abed Rahim Khatib /Flash90)

Fearing a spillover of fighting from Egypt, the Israeli Defense Forces has bolstered its presence in the Sinai Peninsula Thursday after dozens of people were killed in a wave of terror attacks by ISIS.

In response to the unprecedented fighting, the IDF deployed additional troops in the southern region and is operating on high alert status. The army is monitoring the fighting in Egypt via the use of UAV’s, Israel Radio reported.

Clashes come one day after Israel’s Defense Ministry closed the border crossing between the Gaza Strip and Egypt amid growing reports of terror related incidents. IDF sources told Israel Radio that security officials are concerned that the fighting could spill over into Israel.

The IDF is preparing for every scenario, the report added, including kidnapping attempts and infiltration by jihadists.

Israeli Prime Minister Benjamin Netanyahu offered his condolences to Egypt and stated that the attacks serve as a major warning sign to Israel. “Terrorism is knocking at our borders,” he said while visiting an IDF soldier injured in a terror stabbing attack earlier in the week.

“ISIS is not just opposite the Golan Heights. At the moment it is also in Egypt, opposite Rafah, facing our borders, and we are joined with Egypt and with many other countries in the Middle East and the world in the struggle against the extremist Islamic terrorism that is guided by two elements – Iran and the Shiite extremists, and ISIS and the Sunni extremists — as well as other factions such as Hamas”

Former national security chief Maj. Gen. Giora Eiland (ret.) said there was a “real concern” that ISIS could capture Gaza and urged the government of Israel to ensure Hamas remains in control of the coastal enclave.

Egyptian officials told Arab media that the situation was “100 percent under control” on Wednesday night. However, in the early hours of Thursday morning, Egyptian warplanes resumed strikes against ISIS positions in the Sinai.

Since the launching of the jihadist insurgency in Egypt, when former Egyptian president Mohammed Morsi was ousted in 2013, Wednesday’s attacks are being called the most brazen yet.

Jihadists fired rocket-propelled grenades from rooftops at a police station in Sheikh Zuweid after closing off the area to possible reinforcements, an Egyptian police colonel told the media. Car bombings, suicide bombing and rocket attacks followed throughout the day.

“This is war,” a senior Egyptian military official told AFP. “It’s unprecedented, in the number of terrorists involved and the type of weapons they are using.”