Previous Next
America’s day of reckoning just 60 days away?

Two months from now the biblical Shemitah year will have played out and only then will we know whether it has left any significant event in its wake.

In the past, this seven-year cycle has brought collapsing stock markets, tumbling currencies and the shaking of nations and empires.

This period of early autumn was the most crucial time on the biblical calendar for the ancient Israelites, with the end of the seven-year cycle described in Deuteronomy as the Shemitah or Sabbath year. All farmland was to be left in a state of rest and the people were to focus on God and His will for their nation and their lives.

This year on Sept. 13, the Shemitah reaches its peak on the last day on the Hebrew calendar, Elul 29, known as the “day of nullification.” All debt and credit were to be wiped away on this day as described by author Jonathan Cahn in his New York-Times bestseller, “The Mystery of the Shemitah,” published in September 2014. 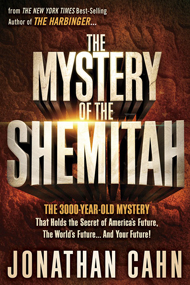 But the Shemitah can be a game-changer not only for economies and stock markets but also in geopolitics.

There is no arguing the fact that the United States of America has been the most powerful “empire” on earth since the end of World War II. Its corporations have been the engine that drives the global economy and its politicians have set the tone for the world order. It’s no coincidence the United Nations is based in New York City, the seat of global financial power.

But even as the nation’s economy flounders and it has gone from the world’s largest creditor to the world’s largest debtor, American culture has also drifted farther and farther from God. Some believe it has drifted beyond the point of return, into full-blown rebellion, with the June 26 landmark Supreme Court decision on marriage being only the latest symptom of a nation that has come unhinged from its foundational belief system.  Obergefell v. Hodges was the biggest shock to Judeo-Christian moral sensibilities since Roe v. Wade in 1973. Both decisions came down in Shemitah years.

In the oft-quoted words of American political philosopher F.P. Dunne, “the Supreme Court follows the election returns.” If that’s true, such monumental shifts in the court’s rulings should not be viewed in a bubble. The five justices who decided to radically alter the legal definition of marriage could not have ruled that way unless they felt the majority of Americans were ready to accept their decision, if not totally agree with it. Thus far it does not appear that they miscalculated. The overwhelming majority of county clerks are issuing marriage licenses to same-sex couples and those who have refused are being replaced by more obedient bureaucrats.

The 20th century’s greatest Christian thinkers, men like Alexander Solzhenitsyn and Francis Schaeffer, believed that a civilization could not continue indefinitely apart from the will of God. Soviet communism fell, Nazi Germany fell, the British Empire disintegrated. And many scholars see the whole of Western civilization as in decline now that it has rejected the very Christianity that made it great. It has succumbed to the pressures that have warred against it from the beginning.

Global problems in our day seem to be spinning out of control. Lawlessness is on the rise. The current order in the Middle East, in place since the end of World War I, has been turned on its head.

“What we are watching now is a massive destabilization throughout the world – from ISIS, to the war in Syria, to the collapse of Greece, the collapse of the Chinese stock market, the destabilizing of the European Union, the issue of nuclear weapons and Iran, the moral and spiritual transformation of America, the deterioration of relations between America and Israel, and more,” Cahn told WND.

What’s this Shemitah business all about? WND has prepared a free E-book primer on the Old Testament principle that God handed down to Moses in Deuteronomy. Find out the biblical basis of the seven-year cycle and how it affects the world today.

“And just now as we approach the climactic last part of the Shemitah, we see the sudden destabilization of the global financial realm,” said Cahn, who authored “The Harbinger,” which became a New York-Times bestseller in 2009.

“Added to this, the Greek crisis specifically deals with issues of debt and debt relief – the central issue of the Shemitah,” he added. “Whether or not the crisis finds a resolution, the very fact that such sudden destabilization of the global financial realm has taken place, and having to do with the issue of debt and credit and the issue of relief, just as the Shemitah nears its climactic period, warrants our attention. And as the Shemitah deals with the wiping out of financial accounts, we now witness China’s financial (stock market) losing 30 percent of its value in less than a month, is more than striking.”

States falling into line even before court’s edict

But it will not stop with the financial realm.

“The Shemitah also can mean ‘the fall.’ And we are watching the greatest, most rapid moral and spiritual fall in American history,” Cahn said. “In the year of the Shemitah, the number of states that struck down the biblical definition of marriage went from a small minority, in the teens, to the majority, and then at the end of June, came one of the most momentous decisions in American judicial history – and history itself – the striking down of the biblical and historic definition of marriage.

“This is a pivotal event with colossal ramifications, and one that draws America one step closer to judgment.”

When Obergefell v. Hodges was being argued before the Supreme Court in March, Cahn said he saw a woman holding a sign that read “Don’t Cross this Line.” He stopped and prayed with her.

Holy matrimony was the first covenant between God and man in the Garden of Eden, when God gave Eve to Adam and the two, male and female, were to become “one flesh” with God as their witness. In the New Testament, marriage is further revealed as a type, a foreshadow, of the relationship between God and his Church, which is called the “Bride of Christ.”

Now man has taken what is holy before God, the marriage covenant, and redefined it in a way that appears right to man in his humanistic way of thinking devoid of the Holy Spirit’s guidance. A line has been crossed, Cahn said, and so the only prayer left to pray is one for repentance and mercy.

America is heading for judgment. Whether that judgment entails a stock market collapse, a collapse of the dollar, or something further down the road that is even worse, Cahn is also praying that the individual Christians that make up the body of Christ in America will get right with God and repent of their sins.

For judgment always starts “in the house of the Lord.”