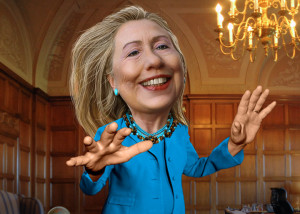 We have been told that black lives matter, and the implication is white lives don’t matter as much. This raises a terrible possibility: that if Hillary Clinton wins the presidency, her administration will proclaim Muslim lives matter.

This is the first of two-part series on America’s unspoken war with Islam.

America’s presidential candidates dance around the question: Do black lives matter? The progressives monitor every written word, blog or tweet for something they can use against a Republican candidate. And to their shame, the Republicans do not fight back.

We are a year from the presidential election and black representatives in the Democratic Party have set sail on a tailwind of black anger stemming from past mistreatment, income inequalities and finally justifiable shootings by police officers of African-American criminals. It is a perfect storm for President Barack Obama, who is playing out his presidency. His focus is on his legacy, specifically as defender in chief of black rights.

Ask yourself the question that Obama never asks, nor do those who have found race-baiting is an effective way to frame almost any argument and win: Do white lives matter?

If a white person answers “yes” or that “all lives matter,” ipso facto he is a racist. Republicans, having lost the country conscience when President Ronald Reagan left office, have acquiesced to the Democrats for a quarter of a century until we have reached a point where independent Sen. Bernie Sanders, a self-described socialist, is running with the leaders in this presidential race.

The country has veered to the left because of white guilt; and even though she is white, Hillary Clinton has the playbook down with the backing of the major media. To grasp the golden ring, Clinton and other Democrats continue to spell out how black lives have more merit than white lives.

Like Obama, Clinton refuses to acknowledge the greatest threat to America.

With apologies to presidential candidate Sanders, the answer is not climate change. The long-term threat to America is Islam. Our government knows it know, or at least Obama and Clinton should know it.

One year ago, Clinton gave a speech at Georgetown University in Washington, D.C., in which she said America should “empathize” and show “respect.”

As reported by Fox News, Clinton said America must become a “smart power.” She then urged America to use “every possible tool and partner” to advance peace and included “leaving no one on the sidelines, showing respect even for one’s enemies, trying to understand and insofar as psychologically possible, empathize with their perspective and point of view.”

It is as if U.S. Ambassador J. Christopher Stevens could have talked his way out of the Sept. 11, 2012 onslaught in Libya. And despite all her hand-wringing over that attack on the U.S. compound in Benghazi, Clinton’s inane appeasement argument is the attack was spurred on by a despicable video that slandered Muhammad. This demonstrates her ignorance of Islamic ambitions, despite being Obama’s secretary of state from 2009 to 2013.

It always feels to me that when violence is perpetrated against Westerners, Obama and now Clinton feel compelled to say that the victims are somehow to blame. Such was the case regarding the Islamist murders of the French satirical writers at the magazine Charlie Hebdo.

Last January, CBS News ran the headline: “White House questioned French magazine’s ‘judgment’ in 2012 for publishing naked Muhammad cartoon.” It was about former White House press secretary Jay Carney who, two years before the attack, said that the magazine had gone too far in lampooning the Prophet Muhammad.

Then came the slaughter early this year in which the White House doubled down on its theory that the best way to win this undeclared global war with Islam is the way Clinton prescribes, by winning their understanding.

We need a president who understands all American lives matter

As blood was washed from the streets of France, it too seemed to be washed from the president’s mind. Most people would have thought that the American president would join with more than 40 other world leaders such as German Chancellor Angela Merkel, British Prime Minister David Cameron and Israeli Prime Minister Benjamin Netanyahu for the march and rally that drew over a million people to remember those who lost their lives at Charlie Hebdo. But not in attendance were Obama, Vice President Joe Biden or even Secretary of State John Kerry, despite his close connections to France. It was hardly the response Team Obama showed when he was front and center at the funeral of Nelson Mandela, whom Obama referred to as “Dada,” a man he met once in 2005 but a man who inspired Obama to do good things. Obama has never mentioned that Dada had a rap sheet; he had pleaded guilty to 156 acts of public violence, including mobilizing terrorist bombing campaigns that planted bombs in public places such as the Johannesburg railway station bombing, which resulted in the deaths of women and children.

We have been told that black lives matter, and the implication is white lives don’t matter as much. This raises a terrible possibility: that if Clinton wins the presidency, her administration will proclaim Muslim lives matter.

In fact, Muslim lives probably mean more to us than they do to Muslims. Syria and Iraq are the most barbarous regions in the world. And yet the butchery continues unabated as does the Islamic goal to dominate the world.

The long-term goal of tens of millions of Muslims is to eradicate Judeo-Christian society, just as Adolf Hitler’s Final Solution was to eradicate the Jews of Europe. We are in the calm before the storm. As Winston Churchill was dismissed in the early 1930s, so will others today for being fear mongers. But keep in mind that like the Nazis there are growing legions of Muslims that are prepared to die for Allah, and it isn’t a group of extremists we need to treat better.

The unholy war is already upon us

My closest friend for more than 30 years finished up a teaching stint in Saudi Arabia, where he taught mostly the children of Saudi aristocrats at a school I called the Alamo. It was a compound surrounded by 12-foot-high walls with additional safety for the mostly Western teachers provided by Western contractors manning machine-gun turrets. While American teenagers’ most revered person living or dead might be Justin Bieber, the person picked by his Saudi students was Adolf Hitler. The same man who exterminated 6 million Jews and started a war that resulted in more than 60 million dead is revered by rich Saudi kids 70 years after his death. And while all the kiddies love American technology, most loathe America itself. They are not alone in the Muslim world. There are between 1.3 and 1.5 billion Muslims in the world. ACT! for America’s president and founder Brigitte Gabriel claimed earlier that 15 to 25 percent of them are “Muslims dedicated to the destruction of Western civilization.”

She concluded that somewhere between 180 million and 300 million Muslims want to destroy the West. This is unrealistic, as you cannot count infants, the old or the infirm bent on much but their own survival. Polls I have read from separate countries say the actual number of radicals able and willing to enter combat is roughly 10 percent of Gabriel’s estimate. Yet it still comes to a startling total of 20 million Muslims who are willing to die so as to institute Sharia law in Christian countries. For comparison, Germany had a population 81 million at the onset of World War II with less than 5 million men under arms. Keeping in mind that at the time Germany had the most mechanized army in the world and that its command and control were far superior to the Western allies’, even 20 million Islamists in Toyota pickups fighting against themselves may raise eyebrows but not alarm bells.

But the Islamists are not idiots. Many in Afghanistan and Iraq have spent much of their lives in combat. And no leader worth of his goat would engage in a conventional war against the United States or any Western power. However, a guerrilla warfare like that which was perfected by Ho Chi Minh would have far different consequences. With Ho’s devout and willing-to-die believers, his original force of 10,000 men fought to a draw two superpowers, France and the United States, for almost 30 years. In the face of vastly superior numbers, technology and training, Ho prevailed.

The first brush wars between Islam and America that have been ongoing for 14 years are not comforting. And while Arab lands lay far away, American targets are all over in a world that seems to shrink each year. What it means is that the United States faces a real challenge that our leaders are going to have to face and then proclaim: America is at war.

If elected, Clinton will prove to be one of the worst presidents in American history.

Clinton may wish “respect for one’s enemies.” But as anyone who has ever been in a street fight knows, respect hits the bricks when the first punch is thrown. Sept. 11, 2001 was the first punch. And while America shook it off, many more shock waves are coming. And, frankly, America cannot defend itself adequately with Hillary Clinton as our commander in chief.

I will follow up more next week with details including the Islamic threat to our futures and how the next president must unite the country rather than exacerbate the racist split in America characterized by stupid slogans like “black lives matter.” Our leaders need to wake up; we are facing an enemy where many of the followers believe no lives matter.

Yours in good times and bad,

is editor of Myers’ Energy and Gold Report. The son of C.V. Myers, the original publisher of Oilweek Magazine, John has worked with two of the world’s largest investment publishers, Phillips and Agora. He was the original editor for Outstanding Investments and has more than 20 years experience as an investment writer. John is a graduate of the University of Calgary. He has worked for Prudential Securities in Spokane, Wash., as a registered investment advisor. His office location in Calgary, Alberta, is just minutes away from the headquarters of some of the biggest players in today’s energy markets. This gives him personal access to everyone from oil CEOs to roughnecks, where he learns secrets from oil insiders he passes on to his subscribers. Plus, during his years in Spokane he cultivated a network of relationships with mining insiders in Idaho, Oregon and Washington.