During a recent televised interview with Grand Ayatollah Ahmad al-Baghdadi, the leading Shia cleric of Iraq made clear why Islam and the rest of the world can never peacefully coexist. 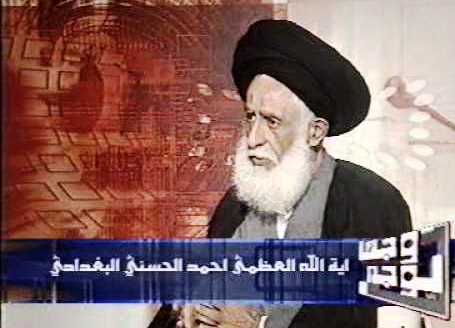 First he spent some time discussing “defensive jihad,” saying that all capable Muslims are obligated to fight for the “liberation” of “occupied” territory, for instance, Israel (see here for a list of European countries also deemed “occupied” in the eyes of Islam).

He then explained “offensive jihad,” Islam’s primary bloodline, which forged what we now call the “Muslim world” over the centuries.

According to the ayatollah, when they can—when circumstance permits it, when they are strong enough—Muslims are obligated to go on the offensive and conquer non-Muslims (a fact to be kept in mind as millions of Muslim “refugees” flood the West).

The Muslim cleric repeatedly yelled at the secularized host who kept interrupting him and protesting that Islam cannot teach such intolerance.  At one point, he burst out: “I am the scholar of Islam [al-faqih].  You are just a journalist.  Listen to me!”

If they are people of the book [Jews and Christians] we demand of them thejizya—and if they refuse, then we fight them.  That is if he is Christian. He has three choices: either convert to Islam, or, if he refuses and wishes to remain Christian, then pay the jizya [and live according to dhimmi rules].

But if they still refuse—then we fight them, and we abduct their women, and destroy their churches—this is Islam!… Come on, learn what Islam is, are you even a Muslim?!

As for the polytheists [Hindus, Buddhists, etc.] we allow them to choose between Islam and war!  This is not the opinion of Ahmad al-Husseini al-Baghdadi, but the opinion of all five schools of jurisprudence [four Sunni and one Shia].

Towards the end of the interview, because the clean-shaven, suit-and-tie-wearing host kept protesting that this cannot be Islam, the ayatollah burst out, pointing at him with contempt and saying, “Who are you? You’re going to tell me what to believe?  This is the word of Allah!”

Indeed.  Not only is it the word of Islam’s deity, but it is the fundamental, insurmountable obstacle for peace between Muslims and non-Muslims. Al-Baghdadi—and the countless other Muslim clerics, Sunni and Shia, that hold these views—are not “radicals.”  For offensive jihad is no less codified than, say, Islam’s Five Pillars, which no Muslim rejects.

The Encyclopaedia of Islam’s entry for “jihad” states that the “spread of Islam by arms is a religious duty upon Muslims in general … Jihad must continue to be done until the whole world is under the rule of Islam … Islam must completely be made over before the doctrine of jihad can be eliminated.”

Islam has yet to “completely be made over.”

Here it’s worth noting that even the most offensive jihad is seen as an “altruistic” endeavor, not unlike the “white man’s burden” of the 19th century.   After all, the ancient argument that “we must reform your ways, with our ways, for your own good” has been one of the most cited justifications for offensive jihad since the 7th century.

Indeed, soon after the death of Islam’s prophet Muhammad (634), when his jihadis burst out of the Arabian peninsula, a soon-to-be conquered Persian commander asked the invading Muslims what they wanted. They reportedly replied as follows:

Allah has sent us and brought us here so that we may free those who desire from servitude to earthly rulers and make them servants of Allah, that we may change their poverty into wealth and free them from the tyranny and chaos of [false] religions and bring them to the justice of Islam. He has sent us to bring his religion to all his creatures and call them to Islam. Whoever accepts it from us will be safe, and we shall leave him alone; but whoever refuses, we shall fight until we fulfill the promise of Allah.

As a member of the true religion [Islam], I have a greater right to invade [others] in order to impose a certain way of life [according to Sharia], which history has proven to be the best and most just of all civilizations. This is the true meaning of offensive jihad. When we wage jihad, it is not in order to convert people to Islam, but in order to liberate them from the dark slavery in which they live.

Even al-Qaeda partially justified its jihad against America for being “a nation that exploits women like consumer products”; for not rejecting the “immoral acts of fornication, homosexuality, intoxicants, gambling, and usury.”

This positive interpretation of jihad ensures that, no matter how violent and ostensibly unjust a jihad is, it will always be vindicated in Muslim eyes: the ugly means will be justified by the “altruistic” ends.

Finally, as Grand Ayatollah Ahmad al-Baghdadi pointed out, the need for Muslims to wage offensive jihad “is not the opinion of Ahmad al-Husseini al-Baghdadi… This is the word of Allah!”

Nor is it the “opinion” of ISIS Caliph Abu Bakr, al-Qaeda leader Ayman Zawahiri, Boko Haram leader Abubakar Shekau, or any of the other countless past and present jihadis.  No, jihad to conquer and bring Sharia to non-Muslims is the command of Allah.

Update: A reader recently translated the video clip I linked to and uploaded it on YouTube. It follows:

Raymond Ibrahim is a Middle East and Islam specialist and author of Crucified Again: Exposing Islam’s New War on Christians (2013) and The Al Qaeda Reader (2007). His writings have appeared in a variety of media, including the Los Angeles Times, Washington Times, Jane’s Islamic Affairs Analyst, Middle East Quarterly, World Almanac of Islamism, and Chronicle of Higher Education; he has appeared on MSNBC, Fox News, C-SPAN, PBS, Reuters, Al-Jazeera, NPR, Blaze TV, and CBN. Ibrahim regularly speaks publicly, briefs governmental agencies, provides expert testimony for Islam-related lawsuits, and testifies before Congress. He is a Shillman Fellow, David Horowitz Freedom Center; a CBN News contributor; a Media Fellow, Hoover Institution (2013); and a Judith Friedman Rosen Writing Fellow, Middle East Forum . Ibrahim’s dual-background — born and raised in the U.S. by Coptic Egyptian parents born and raised in the Middle East — has provided him with unique advantages, from equal fluency in English and Arabic, to an equal understanding of the Western and Middle Eastern mindsets, positioning him to explain the latter to the former.