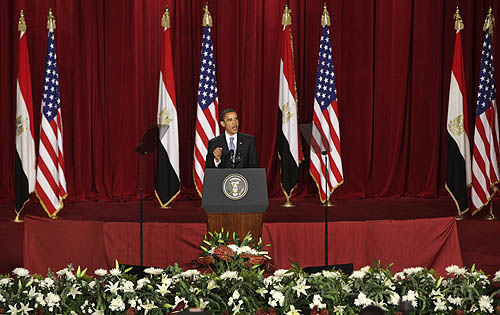 Obama gambled the world’s fate on a belief that “real,” peaceful Islam can overtake the jihadists. Now — as Bibi exhorted — we’re out of time. We must read the Qur’an, every page, and understand how the world’s Muslims interpret and teach it.
by
Robert Spencer
Back in 2007 and 2008, I ran a weekly feature at my website Jihad Watch: “Blogging the Qur’an.” Now, with the Obama administration repeatedly reiterating the claim that Islam is fundamentally peaceful and that promoting its true and benign face will ultimately conquer the global jihad, it is time to revive it.
Here at PJ Media I’ll be presenting a new, revised version of the series.
Why Read the Qur’an
To understand the motives and goals of Islamic jihad terrorists, a good place to start is to explore what they themselves say about why they’re doing what they’re doing, and what they want. That leads directly to the Qur’an (or Koran), the Islamic holy book.
The jihadists quote the Qur’an frequently and portray themselves as those who are following “pure Islam,” the genuine article as it is taught in the Qur’an and Islamic tradition. Yet Islamic groups in the West — such as the Hamas-linked Council on American-Islamic Relations — insist that the jihadis are misusing the Qur’an, and that non-Muslim analysts who trace the jihadis’ activity to the Qur’an are “cherry-picking” violent passages and quoting them “out of context.”
The Obama administration has crafted its entire Middle East foreign policy based on this claim. 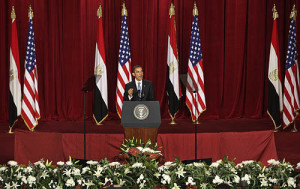 From Nigeria to Iran, the administration believes that promoting the “in-context,” complete message of the Qur’an will bring about a peaceful, safer Middle East.
So we’re going to read the Qur’an. All of it. Nothing “cherry-picked” or “out of context.”
And we’re going to invite elected officials, journalists, and other newsmakers who have made public claims about the nature of Islam to debate and read along with us.
The inspiration for this, back in 2007, was David Plotz’s series on Slate, “Blogging the Bible.” But this series will be fundamentally different than that one: rather than just write about what I think or feel about a certain passage, as Plotz did regarding his own thoughts, I will refer to commentaries — all Muslim ones — on the Qur’an.
I’ll try to explain how mainstream Muslims who study the Qur’an will understand any given passage.
This is important, and is the only point in doing this: I will be posting on what the major translations and commentaries used by the world’s Muslims have to say about the Qur’an.
Not what I say, not what the Obama administration says, not what the terror-tied CAIR says, not what John Kerry says.
———————-

Written by Allah vs. Written by Men
Here is a good Arabic/English text. In Islamic theology, the Qur’an is essentially and inherently an “Arabic Qur’an” (as the Qur’an describes itself repeatedly: see 12:2; 20:113; 39:28; 41:3; 41:44; 42:7; and 43:3). In Islamic belief, the Qur’an’s meaning can be rendered in other languages, but those translations are not the Qur’an, which when no longer in Arabic is no longer itself. Some Muslim scholars even claim that the Qur’an cannot be fully understood except in Arabic.
But the blizzard of translations made by Muslims for Muslims who don’t speak Arabic — who are the great majority around the world today — as well as to proselytize among non-Muslims belies that claim.
Two of the most popular and widely used English translations of the Qur’an were written by Muslims: Abdullah Yusuf Ali, and Mohammed Marmaduke Pickthall. Those can be found here, along with four other translations by Muslims and four by non-Muslims.
What Is the Qur’an?
The Qur’an is, according to Islamic thought, a perfect copy of a book that has existed eternally with Allah, the one true God, in Paradise: “Indeed, We have made it an Arabic Qur’an that you might understand. And indeed it is, in the Mother of the Book with Us, exalted and full of wisdom.” (43:3-4). According to Islamic tradition, the angel Gabriel revealed it in sections to Muhammad (570-632), an Arabian merchant. Like Jesus, Muhammad left the written recording of his messages to others.
Unlike Jesus, Muhammad did not originate his message, but only served as its conduit. The Qur’an is, for Muslims, the pure Word of Allah.
They point to its poetic character as proof that it did not originate with Muhammad, whom they say was illiterate, but with the Almighty, who dictated every word. The average Muslim believes that everything in the book is absolutely true and that its message is applicable in all times and places.
This is a stronger claim than Christians make for the Bible.
When Christians of whatever tradition say that the Bible is “God’s Word,” they don’t mean that God spoke it word-for-word and that it’s free of all human agency — instead, there is the idea of “inspiration,” that God breathed through human authors, working through their human knowledge to communicate what he wished to communicate.
But for Muslims, the Qur’an is more than inspired.
There is not and could not be a passage in the Qur’an like I Corinthians 1:14-17 in the New Testament, where Paul says: “I am thankful that I baptized none of you except Crispus and Gaius; lest any one should say that you were baptized in my name. (I did baptize also the household of Stephanas. Beyond that, I do not know whether I baptized any one else.)”
Paul’s faulty memory demonstrates the human element of the New Testament, which for Christians does not negate, but exists alongside the texts’ inspired character. But in the Qur’an, Allah is the only speaker throughout (with a few notable exceptions).
Only Allah Speaks in the Qur’an
There is no human element. The book is the pure and unadulterated divine word.
Allah himself tells him this, in the Qur’an itself: “And indeed, it is a mighty Book. Falsehood cannot approach it from before it or from behind it; [it is] a revelation from a [Lord who is] Wise and Praiseworthy.” (41:41-2). It is “an Arabic Qur’an, without any deviance that they might become righteous.” (39:28). In short, “it is the truth of certainty.” (69:51). Allah, speaking in a royal plural that does not, according to Muslim theologians, compromise his absolute unity, proclaims that “indeed, it is We who sent down the Qur’an and indeed, We will be its guardian.” (15:9).
——————————
Understanding the Qur’an Requires Knowledge of Muslim Traditions
Yet even though the Qur’an says it includes “clarification for all things” (16:89), reading it is not always easy. Since so much of it consists of Allah speaking with Muhammad, it is often rather like listening in on a conversation between two people you don’t know, talking about events with which you were uninvolved. Even though a surprisingly large amount of what the Qur’an says is said more than once, still often the reader can’t figure out what’s being said, or why, without reference to Muslim tradition.
Also, it has no overarching narrative unity, although there are smaller narrative units within many chapters. With the exception of the brief first chapter (sura), its 114 chapters are arranged from the longest to the shortest.
In the longer chapters, stories are told, laws are given, and warnings to unbelievers are issued, but in them and throughout the book, there is no chronological or narrative continuity. The shorter suras, meanwhile, particularly those near the end of the book that run only a few lines, are poetic and arresting warnings of the impending divine judgment. The longer ones, by contrast, are often ponderous and repetitive — and filled also with similar warnings against unbelievers.
By the end of this journey, I believe we will see more clearly what makes the jihadists tick — and also perhaps understand what we can and must do to resist them.
In the original edition of this series I wrote: “I welcome feedback and criticism in the comments section, in e-mail correspondence, and on other blogs, and will answer questions and respond to the most thoughtful comments, criticism, and challenges.” Above all, I welcome criticism and feedback from Muslims who dispute the understandings of the Qur’an that I will report in this series.
Hamas-linked CAIR says that it’s committed to “dialogue.” Yet neither they nor their allies ever engage in honest dialogue and discussion with those whom they consider their foes.
I invite them here yet again to that discussion.
Robert Spencer is the director of Jihad Watch and author of the New York Times bestsellers The Politically Incorrect Guide to Islam (and the Crusades) and The Truth About Muhammad. His latest book is Arab Winter Comes to America: The Truth About the War We’re In. Follow him on Twitter here. Like him on Facebook here.

Muslims say Swedish women are asking to be raped